The end of Texas' abortion law is wonderful, but there's far more work to be done to protect reproductive rights 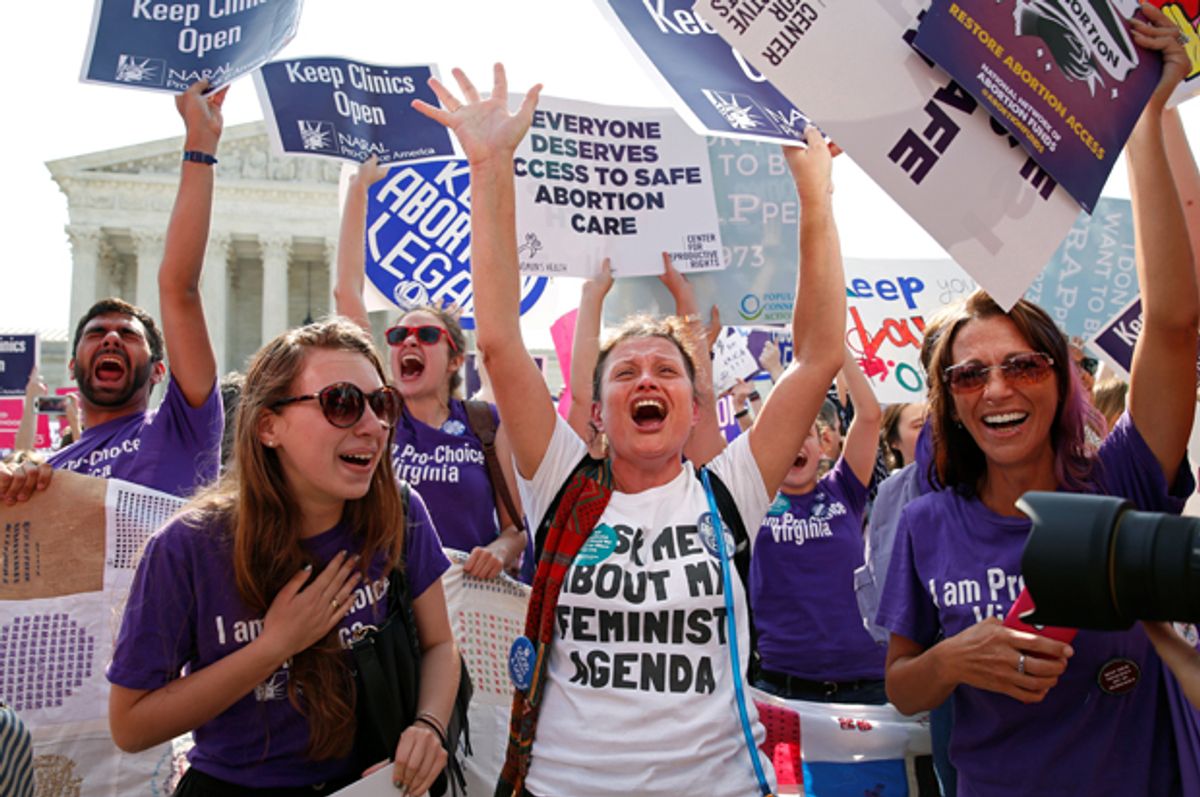 Demonstrators celebrate at the U.S. Supreme Court after it struck down a Texas law imposing strict regulations on abortion doctors and facilities, June 27, 2016. (Reuters/Kevin Lamarque)
--

Monday's Supreme Court decision in Whole Woman's Health vs. Hellerstedt, which struck down a Texas law aimed at regulating legal abortion out of existence, was a resounding victory for the reproductive rights movement. But while everyone should take a day to celebrate this win, the sad fact of the matter is that, after decades of abuse at the hands of the religious rights, the state of reproductive health care is not even close to what it should be in the United States.

Our unplanned pregnancy rate is still high and access to abortion and other reproductive health care simply isn't what it should be. Ending Texas' draconian abortion law is just the beginning. There's a lot more work to be done before the pro-choice movement can rest on its laurels.

1) End the Hyde Amendment. Since 1976, the Hyde Amendment has banned abortion from being covered by federal funding, except in the rare instances of rape or a threat to the health of the mother. That means no federal employees, service women, veterans or women on Medicaid have access to coverage for abortion. These are often the women who can least afford to pay out of pocket in the event of an unplanned pregnancy that they need to terminate.

The effects of the Hyde Amendment have been devastating. One out of four women on Medicaid who wants an abortion simply isn't able to get one, resulting in forced childbirth. Of those women who do get an abortion, raising the money often results in major hardship for the family. The $300-$500 that an abortion costs pinches a middle-class budget, but for those who live in poverty, that often means having to sell things off, borrow money from relatives, or choose between getting the abortion and other life necessities. Women on Medicaid often delay the abortion at least 2-3 weeks in order to raise the money.

Servicewomen face many of the same barriers, with the additional problem of often being unable to even see a doctor who offers abortion, since military hospitals are barred from doing them. Research shows that many of these women consider unsafe black market methods.

Repealing the Hyde Amendment would go a long way towards making sure that every woman, no matter her job or income, can get an abortion is she needs one.

3) Expand access to affordable contraception. Under Obamacare, women are supposed to be getting copay free contraception through their insurance. Unfortunately, as many women are finding, the insurance companies are using red tape, throwing up so many confusing rules between women and their free birth control that many women just give up. There needs to be an effort to force these companies to make free birth control not only available, but easy t0 understand and get without having to spend hours on the phone with customer service people to figure out exactly what you'e entitled to get under what elaborate bureaucratic rules.

4) Protect Planned Parenthood and other non-profit women's health care centers. The anti-choice movement has already moved beyond the efforts to regulate abortion out of existence and now has an eyeball on a juicier target: The non-profit health care infrastructure that helps women find quality reproductive health care at an affordable cost. Planned Parenthood and clinics like it offend the right because they make contraception both cheap and easy to get, which allows the women they like the least — young women and low income women — enjoy the same access to sexual autonomy as older, wealthier women have in our country.

Right now, there's a targeted movement of Republicans aimed directly at destroying these clinics. The pretext is "abortion" or lies about "selling baby parts", but the focus is on ending the funding for contraception services, as well as medical care like STI testing that makes sex safer and easier for women. The pro-choice movement was able to expose the bad faith behind the Texas law, and hopefully that will free up even more energies to expose the bad faith behind the anti-Planned Parenthood movement.

5) Improve our sex and contraception education system. Sex ed in this country is a disaster. Many states continue to push failed abstinence-centric curricula that is based on the utterly ridiculous pretense that students can and will refrain from having sex until they're married. Even more comprehensive programs still fail to address important issues like consent and the diverse options for contraception.

The pro-choice movement can and should demand a standardized system of sex education in this country, where every junior high and high school student is taught about STI prevention, contraception, and consent. Contraception education should be expansive, educating students not just about condoms but about methods like the IUD, which are known for having an exponentially lower failure rate than condoms. Teenagers are already using contraception more effectively than ever before, suggesting that they are educating themselves about their options through the internet. If our school system helped them out, we could get our teen birth rates to the low levels experienced in other Western nations that do offer better forms of sex education.