Could Trump switch gears? The line of attack against Hillary that could hurt her path to the White House 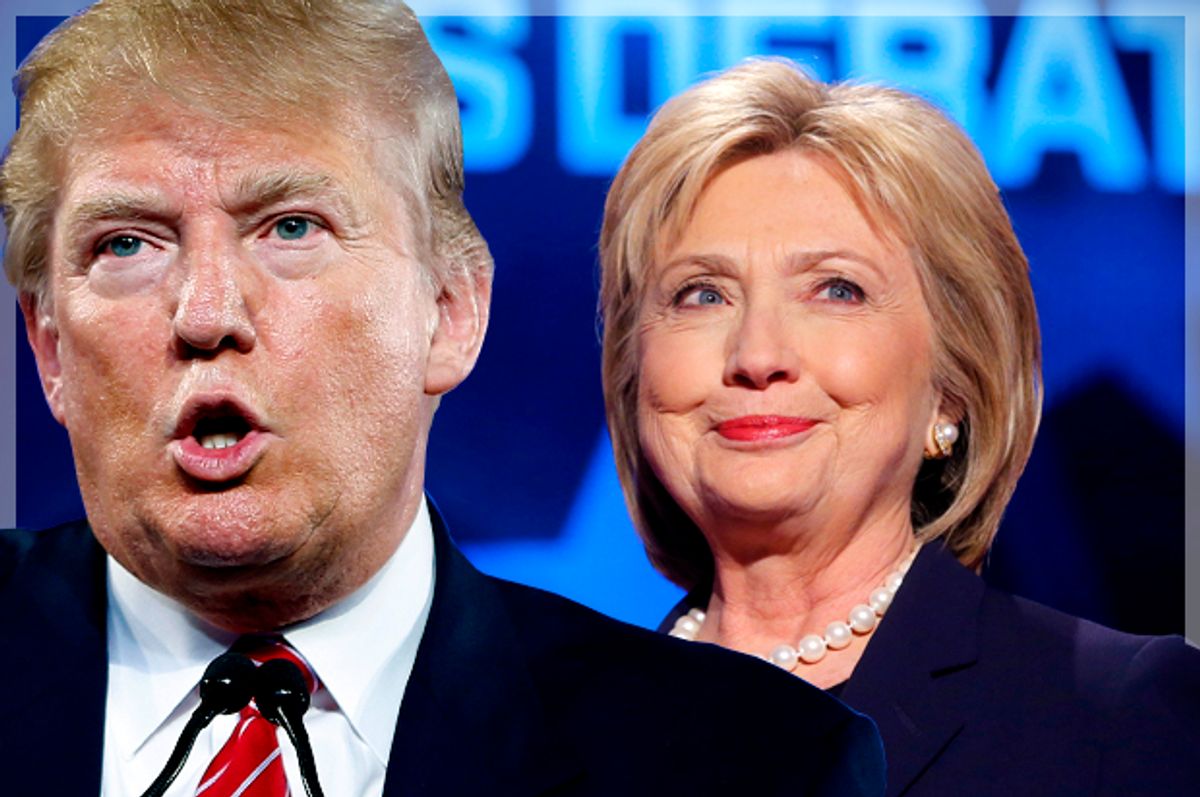 On Wednesday, Republican presidential nominee Donald Trump delivered a planned speech on his Democratic opponent Hillary Clinton, and according to Slate columnist and Clinton supporter Michelle Goldberg, it was “probably the most unnervingly effective one he has ever given,” in which he skillfully combined “truth and falsehood into a plausible-seeming picture meant to reinforce listeners’ underlying beliefs.”

Though packed with fabrications as usual, the Republican presidential nominee avoided blatant and obvious lies, bizarre conspiracy theories (although he did claim that foreign governments may have a “blackmail file” on Clinton while discussing the email scandal, which is entering Alex Jones territory), and personal insults -- all of which he had previously employed in his attacks on Clinton. Again, the speech was extremely dishonest in many parts, but the falsehoods were more subtle and less downright loony, and thus much more effective.

Over the past couple of weeks, Trump has done a lot to sabotage his own campaign — from his racist attacks on the Hispanic judge overseeing the class-action lawsuit against Trump University to his shameless Tweet congratulating himself after the Orlando mass shooting. This has led some to conclude that the billionaire doesn’t really want to be president (and really, who can blame him?) and is deliberately running his campaign into a wall. Since becoming the nominee almost two months ago, his already atrocious favorability ratings have continued to drop, and according to a Bloomberg survey from last week, 66 percent of Americans now view him unfavorably.

There is no doubt that the election is Clinton’s to lose. The former Secretary of State’s campaign is a well-oiled machine that currently has about forty times as much cash on hand as the Trump campaign. And while Clinton is overwhelmingly distrusted (and disliked) by the public, the idea of a Donald Trump presidency tends to scare more than half of Americans, and he has done a great job at repelling women and people of color over the past year.

Of course, it is unlikely that Trump will actually do this — he has proven time and again that he has a natural aversion towards substantive debate, and prefers touting conspiracy theories and making personal attacks. He is an impulsive bully whose propensity for pettiness knows no bounds. But the sheer political baggage of Clinton does make her very vulnerable indeed.

From her ties to big Wall Street firms like Goldman Sachs (whether in campaign contributions or paid speeches) to the Clinton Foundation’s financial connections to foreign governments like Saudi Arabia, along with ugly and inconvenient truths — like the fact that Clinton’s state department approved massive arms deals with the aforementioned country after it had donated millions to her and Bill’s non-profit, or the fact that Bill earned the highest paid speeches of his post-presidency career while his wife was Secretary of State, most of which were sponsored by foreign governments and foreign organizations.

If Trump sticks to these kinds of facts in his criticisms of Clinton — without straying into Alex Jones (or Donald Trump the mindless bully) territory — Hillary’s path to the White House could become increasingly complicated. It does make you wonder: after being dogged by scandals and conspiracy theories ever since they entered the national spotlight, did Hillary and Bill think that giving high-priced speeches for publicly despised companies like Goldman Sachs and General Electric, accepting millions of dollars from foreign governments and organizations for their foundation, or cozying up with shady donors like Sant Chatwal and Frank Giustra (all of these companies, individuals, and governments are interested in buying influence, and to say otherwise is delusional) would be ignored by their opponents? As I have previously noted, it takes a special kind of arrogance to think this way, although it’s possible that Hillary expected her Republican opponent to be even more tainted by big donors (being a Republican and all).

Of course, Donald Trump is an entirely different kind of corrupt. He hasn’t been in politics his entire life and doesn’t have a history of accepting big donations from Wall Street and corporate America. Instead, the billionaire is simply a charlatan and a fraud — whether it’s swindling vulnerable working people into buying sham Trump University degrees or fear-mongering, bullying and flagrantly lying his way to the nomination. Trump is the lovechild of P.T. Barnum and George Wallace; a shameless self-promoter with an ego that makes Kanye West look humble and a temperament that makes Joe McCarthy seem refined.

And these qualities will probably get the better of him in the months ahead. The buffoonish billionaire will most likely continue rambling incoherently about conspiracy theories that he’s read on Infowars.com and mocking Bubba’s infidelities, and for this, Clinton should be grateful.