The Supreme Court justice is gone, but Monday's reproductive rights ruling shows how big a figure he was 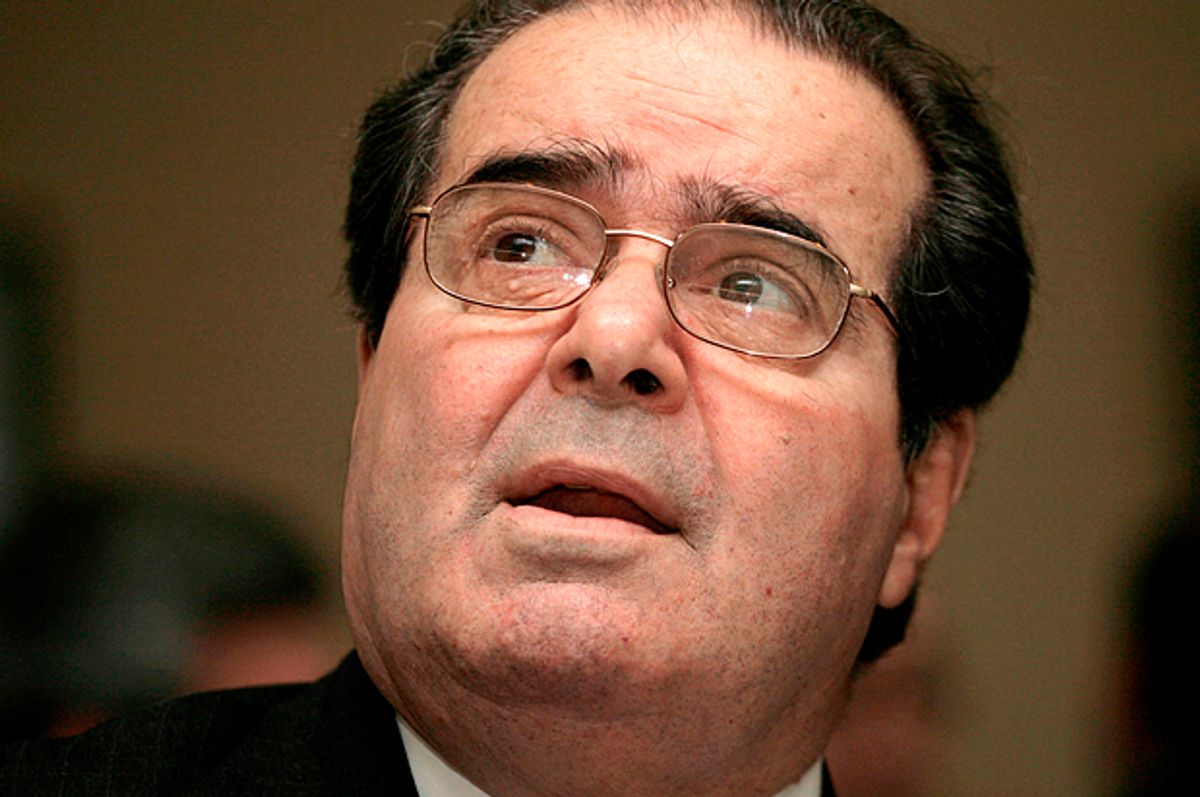 If only Antonin Scalia were alive to see this day. Although this would probably kill him.

When the controversial Supreme Court justice died in February after thirty years on the bench, it set off a frenzied political battle for his now-vacant seat and one brief poetic moment when he almost got a law school named ASSOL in his honor. And now, his presence and his legacy in two areas near and dear to his heart are reminding us this week exactly how he will forever be remembered.

On Sunday, as Pride marches celebrated love all over the country, we also marked the first anniversary of the Supreme Court's ruling in Obergefell v. Hodges, and marriage equality for all. It was a fitting day to also recall Scalia's memorable dissent, in which he fumed that "One would think Freedom of Intimacy is abridged rather than expanded by marriage. Ask the nearest hippie," and angrily vowed that if he ever agreed with the Court's majority opinion, "I would hide my head in a bag."

Then on Monday, the Court proved yet again that it's now up to Samuel Alito and Clarence Thomas to be the designated angry foes of social progress, when the Court handed down a decisive victory for reproductive freedom. In a 5-3 decision, the Court struck down the 2013 Texas law that aimed to shut down most of the state's abortion providers on the blatant lie that it was for the sake of women's safety. In her opinion, Judge Ruth Bader Ginsburg asserted firmly that "It is beyond rational belief that H.B. 2 could genuinely protect the health of women, and certain that the law 'would simply make it more difficult for them to obtain abortions.' When a State severely limits access to safe and legal procedures, women in desperate circumstances may resort to unlicensed rogue practitioners... at great risk to their health and safety."

And it's moments like this that really make a person sentimental thinking about the epic fit Scalia would have pitched over this one. Clarence Thomas, after all, could only croak out a grumpy, "As the Court applies whatever standard it likes to any given case, nothing but empty words separates our constitutional decisions from judicial fiat." The ghost of Scalia must be so disappointed. He, after all, was a man who called the Affordable Care Act "jiggery-pokery" and once asked, with a straight face, "If we cannot have moral feelings against homosexuality, can we have it against murder? Can we have it against other things?" Imagine the word salad he'd have tossed on this auspicious day.

That loss was felt acutely on social media, where Scalia was widely remembered on Monday. Mentioning him in my own Twitter timeline quickly brought forth responses like, "I hope hell exists just so I can hope he is burning in it" and "He's one zombie I hope to decapitate in the coming apocalypse." Elsewhere, Tom Ceraulo mournfully observed that "It's a shame Scalia wasn't alive for today's decision, since his vote wouldn't change the outcome & his dissent would employ Dr. Seuss words," while Parker Molloy similarly daydreamed, "Kind of wish Scalia was around so we could bask in what would have certainly been a colorful, angry dissent. #pureapplesauce #jiggerypokery." Iron Circus Comics, meanwhile, wrote, "*Gently gyrates on the fresh earth of Scalia's grave* STILL GLAD." But looking on the bright side, Mark Harris noted, "With the death of Scalia, it's been heartening to see Clarence Thomas come into his own as one of the worst justices in SCOTUS history," while John Fugelsang reassured, "At least we know that right now Justice Scalia is in Heaven, telling the Virgin Mary what she can and can't do with her body."

He worked tirelessly to stand in the way of women's reproductive rights, and he would have no doubt never stopped doing likewise. He didn't get the chance Monday in the Supreme Court. And with every step the Court takes that doesn't drag women into back alleys, it's clear that Scalia continues to cast a long shadow. For years to come, we'll look at Supreme Court rulings that affect the health and well-being of women and know exactly how he'd have decided, and how frighteningly different their lives would have been because of it.