A leap for women's rights: The Texas abortion case and the end of reproductive Jim Crow laws 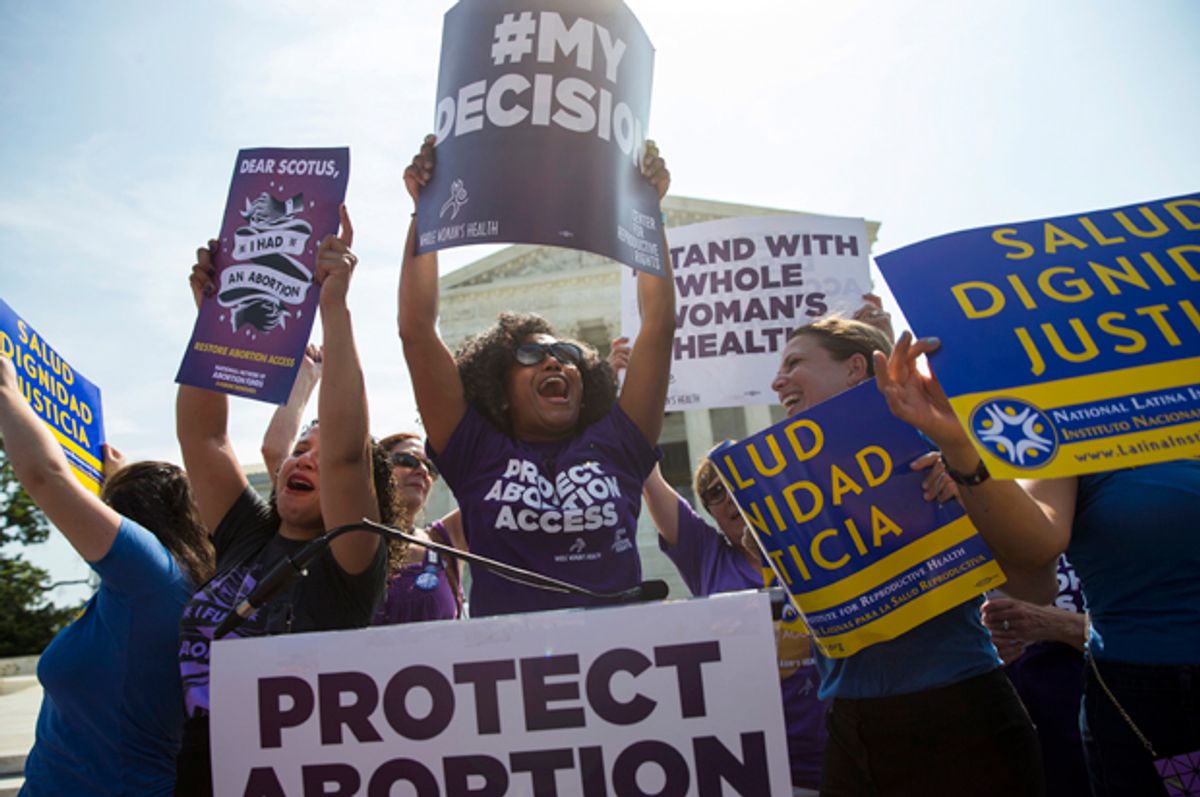 After the 13th, 14th and 15th Amendments were ratified, collectively freeing the slaves and granting them full citizenship rights (the men anyway), white supremacists concocted various subversive laws to oppress African-Americans within the new mandates of the Constitution. The laws were originally known as the "black codes" and eventually as "Jim Crow" laws.

One of the many draconian statutes passed was a law against the trivial non-crime of "vagrancy," allowing law enforcement to arrest and incarcerate African-Americans for being unemployed or incapable of proving employment. In many cases, these men were sold to the owners of semi-secretive mining operations or plantations as, essentially, neo-slaves to serve without pay – in many cases, permanently disappeared from society. But since these were convicted criminals, slavery wasn't slavery. It was justified as legal punishment for a ludicrous non-crime handed down by a kangaroo court, staffed by members of one good-old-boy network after another. Other laws, such as literacy tests, poll taxes, segregation and anti-miscegenation statutes followed, and not just in southern states, by the way.

Fast forward 150 years and we find ourselves in a similar predicament with regard to reproductive rights.

Incapable of overturning Roe v Wade, radical conservatives have devised loopholes to prevent or even criminalize abortions, each of which in some way regulates the basic human right to retain purview over ones body. Faced with an increasingly permanent Roe decision, we've seen countless examples of laws that make it nearly impossible in some states to undergo a constitutionally protected medical procedure.

Rather than banning it, legislatures decided that clinics can only exist within a certain distance of a hospital; they've decided that women should be forced to have what's known as a transvaginal ultrasound in order to intimidate them against having an abortion; they've decided in some cases to redefine what constitutes a "legitimate" rape; and they've peddled "fetal personhood," "fetal heartbeat" and "fetal pain" laws that are de facto bans on abortion. The endgame here, whether intended or not, is the oppression of women as second-class citizens if not outright criminals committing a so-called "genocide" against the unborn. In this case: Jane Crow. (This isn't intended to diminish the African-American experience and the atrocities of the past. However, the conservative strategy of oppression is similar in both cases.)

Gratefully, in Whole Woman's Health v Hellerstedt, the Supreme Court overturned several of these laws on Monday, ruling five-to-three to strike down the controversial HB2 law in Texas -- a law that successfully closed half of clinics in the state by requiring those facilities to follow strict "surgical-center" guidelines about the design and layout of the structures, as well as requiring that clinic doctors have admitting privileges at nearby hospitals, no farther than 30 miles from the clinics.

Justice Ruth Bader Ginsburg's opinion was perhaps the most salient:

Ginsburg kept her argument simple: Abortions are statistically safer than many simpler medical procedures, including tonsillectomies, colonoscopies, in-office dental surgery and childbirth — but Texas does not subject those procedures to the same onerous requirements.

“Given those realities, it is beyond rational belief that H.B. 2 could genuinely protect the health of women, and certain that the law ‘would simply make it more difficult for them to obtain abortions,’ Ginsburg wrote. “When a State severely limits access to safe and legal procedures, women in desperate circumstances may resort to unlicensed rogue practitioners ... at great risk to their health and safety.”

When challenged to cite cases in which women's health was in danger due to a lack of surgical facilities or admitting privileges, attorneys arguing in support of HB2 couldn't name any. Because none exist.

The Court weighed HB2 against the precedent of the landmark Planned Parenthood of Southeastern Pa. v Casey case from 1992, which ruled against placing undue burden on women seeking a previability abortion. While the Court is obligating to rule on laws based on objective facts and the integrity of precedent in support of or contrary to those statutes, the motivations behind the Texas law, as well as other Targeted Regulation of Abortion Providers (TRAP) laws nationwide are obvious. Anti-choice conservatives aren't at all interested in clinics with surgical-grade equipment and the like, nor are they interested in women's health in general. It's not breaking news to observe that TRAP laws are all about making abortions as inconvenient as possible without outright banning the procedure. The assenting justices had to have known this.

In this regard, the Court's majority opinion was precisely what it should've been: the excoriation of an obvious strategy to force pregnancy on women regardless of whether they can afford it or whether they can physically endure it. The ruling was additionally satisfying knowing that 40 years of conservative efforts along these lines has been swiftly obliterated, irrespective of the ideological makeup of the Court. While anti-choice zealots will walk away knowing they might've saved some fetuses along the way, they'll have no choice but to hunker down and figure out a new path forward. Considering how the constitutional route hasn't worked, and now the TRAP route has begun to disintegrate, the anti-choice movement will have no choice but to double its efforts to accost organizations like Planned Parenthood, which, itself, is turning out to be a losing proposition given how more than a dozen investigations have exonerated the clinics of illegal or unethical activities, including the sale of fetus parts.

Along those lines, acts of terrorism could become more frequent, principally due to the deceptively edited videos targeting Planned Parenthood, and now accompanied by the rage that's already brewing as a result of the Hellerstedt decision. This fight for reproductive rights isn't over by a long shot, but the era of reproductive Jim Crow appears to be concluding. Monday's judgment has effectively decimated perhaps the most effective conservative weapon against choice since Roe.