False hope for sale: Trump, Brexit and the irrational response to the very real threat of neoliberal policies

People are right to feel marginalized by neoliberalism, but the solution does not lie in scapegoating immigrants 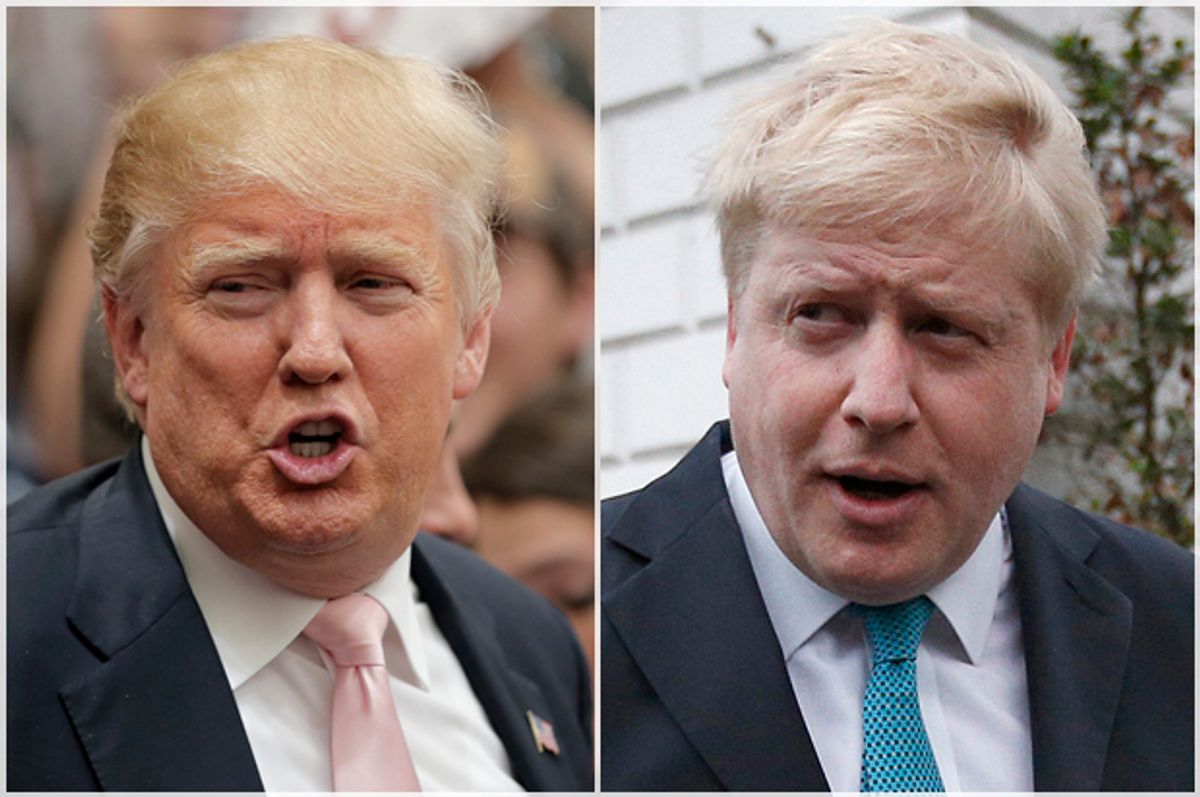 On Saturday, two days after a slim majority of the United Kingdom’s population voted to leave the European Union in a nationwide referendum, Labour Party leader Jeremy Corbyn — who has been very critical of the EU’s neoliberal policies, but nevertheless supported remaining in the political union and working towards reform — addressed the “Brexit,” while decrying the economic policies of the conservative party (i.e. the Tories) that have engendered disillusion and thus a divisive and reactionary form of politics:

“The Tories choice to make deprived communities pay for the [financial] crisis not of their making has opened the door for a very nasty, divisive form of politics in this country,” remarked the MP. “That divisive politics has sought to blame immigrants, not government... government that fail to invest, that have deregulated the labor market, and turned a deaf ear to the communities that are being left behind.”

The shocking referendum result, which may lead to a breakup of the United Kingdom (Scotland voted overwhelmingly to stay in the EU, and will likely hold another referendum to leave the UK and thus remain in the political union), is a sign of things to come around the world if a strong and united movement on the left does not challenge the technocratic neoliberalism of the EU and the right-wing populism that is seeking to replace it.

Not surprisingly, Brexit was celebrated by right-wingers across Europe, as well as the United States’ most famous demagogue, Donald Trump. “Just arrived in Scotland. Place is going wild over the vote. They took their country back, just like we will take America back. No games!” wrote Donald on Twitter, seemingly unaware that the Scots voted to stay in the EU (but when have facts mattered to Mr. Trump?).

The presumptive Republican nominee also gloated that Brexit (a popular term that he was  ignorant of just a couple of weeks ago) was the UK’s version of his “America First” populist campaign:

“Many people are equating BREXIT, and what is going on in Great Britain, with what is happening in the U.S. People want their country back!”

And it’s true. As with the Trump campaign in America, the Brexit movement was based largely on the forces of xenophobia and nationalism, along with an anti-elite — or in some cases anti-intellectual — backlash against the technocratic EU. The bleach-blonde Boris Johnson, a contender for prime minister after David Cameron's announced resignation, was as fact-free as Trump in his Brexit campaign, and even claimed that President Obama — who opposed Brexit — has an "ancestral dislike" of Britain because of his Kenyan heritage.

For those on the left, this is a complicated situation. The revolt against the undemocratic European establishment seems long overdue, as does the revolt against the two-party political establishment in America. But the backlash we are currently witnessing in the UK is as irrational as it is self-destructive, and the left must avoid being swept up in mindless nationalism and nativism in their opposition to neoliberalism.

Since the global financial crisis began almost a decade ago, technocrats in Brussels and Frankfurt have relentlessly forced draconian and economically destructive austerity policies on the people of Europe, and consequently extremist movements on the right have blossomed. In Greece, a country whose people have faced untold economic misery because of austerity, the neo-Nazi Golden Dawn party has flourished (it is a great irony of today that Germany, a country that saw the rise of the Nazis after being economically battered and politically humiliated by European elites, is now doing the same to other countries as a creditor nation). And in the UK, the euro-skeptic wing of the conservative party and the right-wing populist UK Independence Party have thrived off of xenophobia and bigotry as desperate   members of the working class have been left behind economically (as Corbyn noted).

Last month, I wrote an article discussing the anti-establishment backlash that is currently unfolding in America with the presidential campaigns of Donald Trump and Sen. Bernie Sanders, and why the left must push for social democratic reform or risk letting a demagogue like Trump become the alternative to neoliberalism. As in Europe, Americans are starting to reject the party establishments, which are both deeply corrupted by special interests and inherently elitist (Republicans may be the party of the billionaires, but the Democrats are the party of an elite professional class).

While the United States has had a much smoother economic recovery than Europe — in large part because the US has a monetary and fiscal union (unlike the eurozone) and did not fall as deeply into the austerity trap — it has still been a mediocre and slow recovery, and most economic gains have gone to the top one percent. Meanwhile, economic inequality has continued to soar, big money has continued to flood politics, too-big-to-fail banks have gotten even bigger, and no notable Wall Street executives have been prosecuted for defrauding Americans and wrecking the economy.

People are pissed off — and they should be. But Donald Trump and his reactionary counterparts in Europe are selling false hope; scapegoating vulnerable minorities, immigrants, and anyone who is perceived as different. It is an old populist strategy that tends to be most potent when the people are economically desperate and anxious (e.g. the Nazis conveniently blamed the Jews for Germany’s economic woes in the 1930s).

Anyone who has looked beyond Trump’s tough talk and bravado knows that he offers no viable solutions to the problems facing America — especially those of the economic sort. Indeed, the few proposals that he has put forth would be economically disastrous: getting into trade wars with China and Mexico; deporting 11 million undocumented immigrants (at the cost of hundreds of billions to the economy); and slashing taxes for the wealthy (according to some estimates, his tax plan would add over $10 trillion to the debt over a decade). If Trump had his way, he would quite possibly be “the worst jobs president of all time.”

Addressing the very real problems that four decades of neoliberalism has left in its wake will require progressive solutions that have been effective in the past — the kind of social democratic policies that Sanders has advocated in America and Jeremy Corbyn in the UK. It should be recalled that when Franklin Roosevelt and his European equivalents fought for social democratic reforms in the mid-twentieth century, it was largely to stave-off radical revolts from the left and/or right. And if the Democratic party decides to cling to the centrist complacency and meritocratic dogma that has dominated the party since the 1990s, many voters who are weary of establishment economics and politics may very well be duped into voting for a demagogue like Trump (for those who still believe Trump can never win — a new poll from CBS News shows him and Clinton currently neck-and-neck in battleground states).

Of course, the left must set its sights beyond party politics and encourage a popular movement that combats both neoliberalism and right-wing populism. The Sanders campaign is a hopeful sign for progressivism, and so are the various left-wing movements emerging throughout Europe. In the coming years, neoliberalism will be challenged from both sides of the political spectrum, and the left must have ready policies based on rational and democratic principles to thwart the irrational authoritarianism we currently see emerging across the developed world.