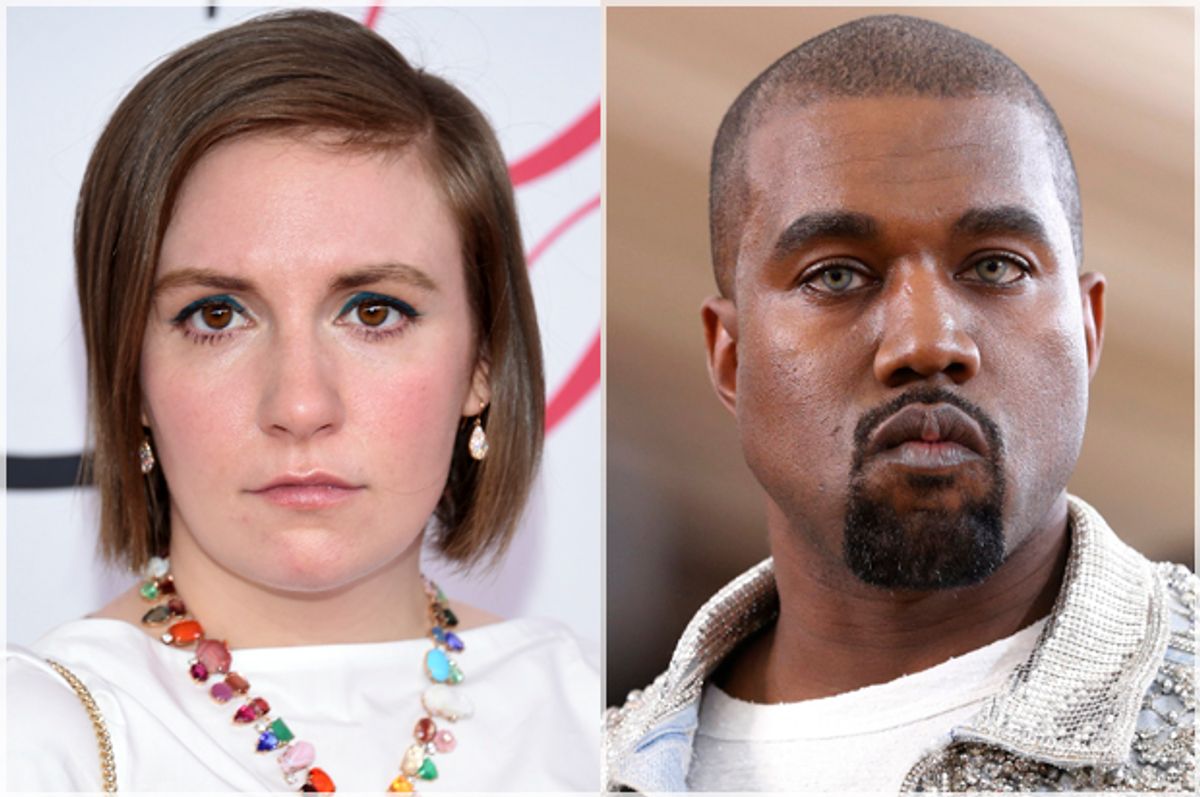 Lena Dunham and Kanye West: both undeniably multi-talented, award-winning artists with a keen sense for provocation. Both, also, apparently incapable of having a reaction to anything, ever, not in the form of a public statement. And lately I feel someone needs to step up here and say, Not All Liberal Arts Survivors.

This is a grudge match that stretches back at least seven years now, to the moment West, unable to suppress his emotions, bum rushed Taylor Swift's moment of victory at the MTV Video Music Awards. Bursting onto the stage, he took the spotlight for himself to famously declare, "Ima let you finish, but Beyoncé had one of the best videos of all time! One of the best videos of all time!" Swift soon after decided it would be "important" to write a song about the experience, and released "Innocent." Now, the better part of a decade later, these two are still working out their feelings. This winter West dropped the eyebrow-raising lyric, "I feel like me and Taylor might still have sex / Why? I made that bitch famous" and stood by it, saying, "First thing is I’m an artist and as an artist I will express how I feel with no censorship." Swift soon subtly shot back, while holding a Grammy in her hand, saying in her acceptance speech that "There are going to be people along the way who will try to undercut your success or take credit for your accomplishments or your fame." Things escalated yet again earlier this month when West had a "visual premiere" for the video for "Famous" — and the clip featured him in a bed with a slew of wax nude celebrity lookalikes, including, right next to him, Swift. And when his actions did not provoke the immediate uproar he'd hoped for, just to make sure he got all the attention possible, West double dog dared to the world on Twitter Saturday, "Can somebody sue me already #I'll wait."

But on Monday, in a lengthy Facebook post, Swift's buddy Lena Dunham took the bait. While saying she'd waited "with bated breath" for West's new work, she admitted that "Now I have to see the prone, unconscious, waxy bodies of famous women, twisted like they've been drugged and chucked aside at a rager? It gives me such a sickening sense of dis-ease." Then she trotted out her art cred, saying, "I was raised in the art world by a dad who painted aggro scenes of sexuality and war and a mom who, ironically enough, has photographed some butt naked life-sized dolls of her own. I live for the nude rabble rousing of Carolee Schneemann and Hannah Wilke, for Kathy Acker's arty porn, for Paul McCarthy's gnomes with butt plugs and Vito Acconci masturbating under the gallery floor and Carrie Mae Weems shedding a blinding light on the pleasures and terrors of black womanhood. If it's been banned, I'll probably love it. Because I know that art's job is to make us think in ways that aren't always tidy or comfortable. But this feels different…. I don't have a hip cool reaction, because seeing a woman I love like Taylor Swift (f__k that one hurt to look at, I couldn't look), a woman I admire like Rihanna or Anna, reduced to a pair of waxy breasts made by some special effects guy in the Valley, it makes me feel sad and unsafe and worried for the teenage girls who watch this and may not understand that grainy roving camera as the stuff of snuff films."

Like Dunham, West knows his way around a gallery talk too. The tableau of "Famous" is an homage to Vincent Desiderio's 2008 painting, "Sleep." He's collaborated in the past with artists like Marco Brambilla, Takashi Murakami and George Condo, and and briefly attended Chicago’s American Academy of Art. Last year he received an honorary doctorate from the School of the Art Institute of Chicago. These two are one pledge drive away from being PBS.

So here we are — Kanye and Lena, the smart kids with the art background who are now both in their thirties, here to remind you how totally insufferable the art kids can really be, especially when they're not kids any longer. In her recent Lenny Letter interview with Sheryl Sandberg, Dunham said, "I was also the product of a mother who told me that basically everything I said and every piece of art I created was of value." Mamas, don't let your babies grow up to think that everything they say and do has value. Because neither West and Dunham, artists who've produced some truly great stuff over the years, are demonstrating quality adult behavior here. Instead, like the coddled offspring in the Gifted and Talented program, they're publicly obsessing over and making dubious creative works about and having arguments over… Taylor Swift, and demanding that their opinions be given weight and seriousness. Which, to give a reality check here, is exactly what my 12 year-old and her friends do too.