Sansa Stark has always been a warrior: She's been fierce all along — and it kept her alive 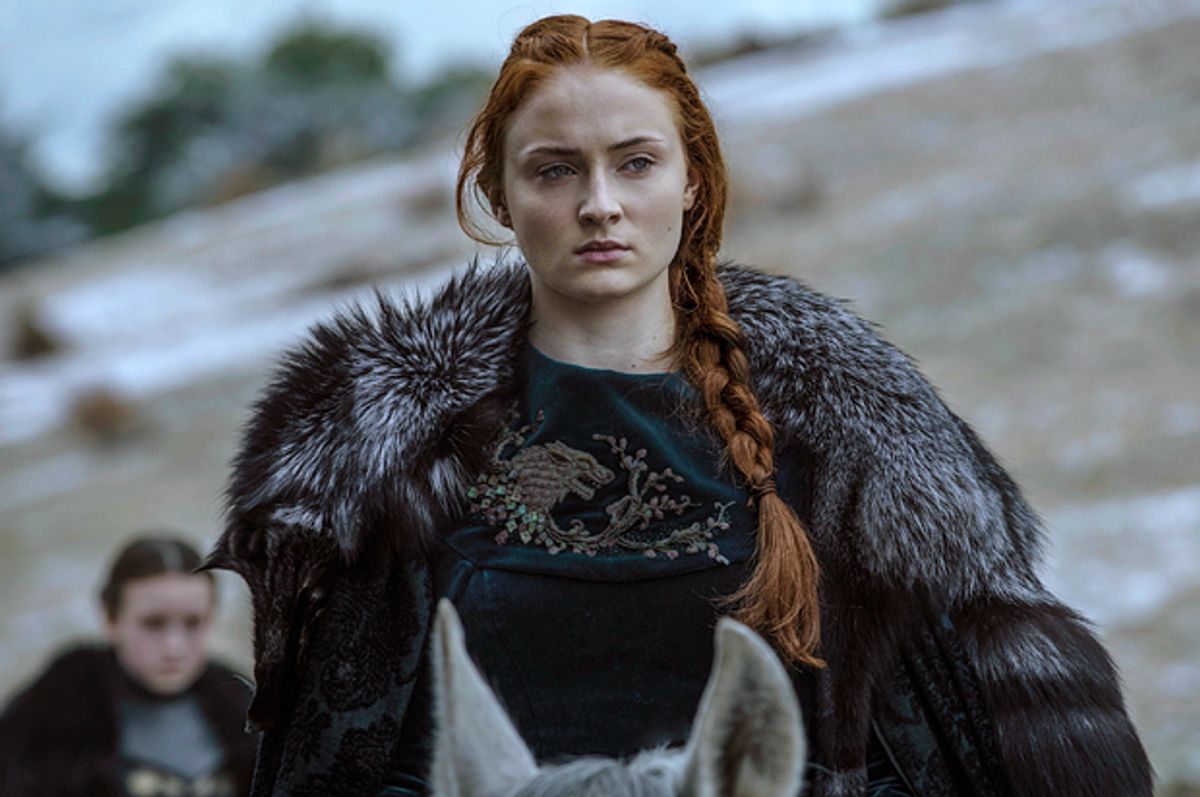 Until recently, it’s been lonely on Team Sansa. We "Game of Thrones" fans who have seen great potential in the Northern princess have been shouted down by fans who exclusively preferred more conventionally plucky heroines: She’s a frivolous little girl, they said; her dithering devotion to being the belle of the court, the queen to end all queens, helped get Ned Stark killed, they said; she’s always such a victim, they said. Now, Twitter erupts in exuberant cries of “Yes, Queen!” at the young woman who smirks with a well-earned satisfaction after she’s released the man-eating hounds on her rapist. That woman is simultaneously worlds away from the girl who stood in silent rage as another tormentor displayed her father’s head on a spike—and yet, she is still, in some ways, that same girl, the girl who had an uncanny instinct for survival.

Though the remaining Starks have known unfathomable woe, arguably none has endured the breadth and intensity of abuses and humiliations that Sansa has: Held as a hostage by the same wicked family who slaughtered hers; stripped, beaten, and humiliated by the boy-king Joffrey; married off to Tyrion (who does treat her with kindness and dignity—though, make no mistake, his decency is a gift to her, one that, had he been a different man, he could have revoked with impunity); fleeing for her life after she is framed for Joffrey’s murder—by the very man who takes her on as his pupil and ward, the man who kills her aunt (who, admittedly, was trying to kill her) and sells her into marriage with a man who gets his jollies flaying people alive (the scion of yet another family that killed hers), her rapist and most depraved torturer. Sansa’s capacity for endurance certainly rivals that of any of the more literally battle-hardened characters; indeed, her parlay with Jon Snow prior to the “Battle of the Bastards” displays the parallel lines of each character’s power: He has a warrior’s brute strength and fiery heart, and she has the foresight and tactical reserve that comes from constantly anticipating the next blow.

Characters like Jon Snow, or Brienne of Tarth, or Sansa’s sister Arya are so appealing because they possess the traits—bravery, strength (in terms of physicality and fortitude alike), and cunning—that we want for ourselves; and they earn those traits through the feats of honor, derring-do, and unbridled badassery that we fantasize ourselves capable of. Sansa’s resourcefulness is different—she has learned to keenly read her aggressors in the service of her own skin. When Tyrion Lannister intervenes to stop another beating (administered by one of Joffrey’s heavy-hitting Kingsguard), and offers Sansa out of her betrothal, she parrots back a line she said in fervent earnest back when her father tried to flee King’s Landing—that she loves Joffrey and wants to have his babies—only this time, her words are a refutation of the callow princess who believed in fairy tales and courtly lore, and a canny recognition that pretending to be that princess is the only way she has value, and having value is the only way she stays alive.

This is a sadder, more fragile way to be survivor; it doesn’t uphold any veneer of virtue or valor, it simply gets her through another hard night into another cold day. Our culture has very resolute standards about who gets to be heroic. Victims make us uncomfortable. We can’t accept that our continued safety in the world is so largely a matter of happenstance—being born to sane, loving parents, not leaving the party at that particular moment, with that particular person, or getting in the car just a few moments later—so we find ways to blame these people for their own agonies, even if merely getting through those agonies requires a Herculean fortitude. Only now that Sansa has weaponized her resourcefulness—she brings about Ramsay Bolton’s downfall by understanding his modus operandi (and anticipating Jon’s likely reaction to it, charging in with a righteous, yet blind, fury), and by leveraging Littlefinger’s twisted affections for her to procure the cavalry—is she seen as a compelling heroine. The host of the usually delightfully catty video recap series "Gay of Thrones" used to refer to Sansa as “busted redhead” (an ignoble distinction when even a character as reviled as Cersei is dubbed “evil Cher”). He’s recently given her a more Beyoncé-inspired nomenclature: Sansa Fierce.

Though I would argue that Sansa has, in her own quieter, more subtle way, always been fierce, I am heartened to see her become more active in her ferocity. She drives the Stark resurgence, turning the violations against her house and her body into her rallying cry against the Boltons—if she must always remember, in her deepest, most tender places, what was done to her, then the North will remember as well. If Sansa’s previous plot threads focused on the loss of innocence, and the heroism inherent in keeping her head down, now, her story has pivoted into the aftermath of victimhood—what happens when the blood dries and the bruises recede into muscle memory. Sansa is the callused, and at times, callous, survivor.

In a gorgeously written essay that I absolutely disagree with, Sean T. Collins argues that “revenge under any circumstance—even one as justly deserved as Sansa’s over Ramsay’s—is a sword without a hilt … There’s no way to control which way it swings and how deep it cuts.” Not so: Sansa’s blade has a clear, clean arc—killing Ramsay obliterates an evil, and it directly avenges the litany of terrors he inflicted upon her in any given night. Collins makes a very adept observation about Sansa reclaiming her own bodily autonomy by literally dismantling Ramsay’s body—I’d add that this act of dismantling also reflects what Ramsay tried to do to her spirit. Yet he did not break her. And her revenge, vicious as it is, is her ultimate assertion of self. She didn’t deserve what happened to her, but she does deserve to see her captor punished—though Ramsay would likely have been executed for his crimes against the Northern houses, particularly for killing Rickon Stark, he would not have been called to answer for crimes that could sadly be par for the course on any Westerosi wedding night.

In his essay, Collins laments Sansa’s violence because it seems in opposition to her father’s decency. It’s true that Sansa is no longer her father’s daughter—she is someone new, and more her own woman than ever before. Jon’s cleaving to Ned’s kind of honor nearly gets him and his men killed on the battlefield (and in the season six finale, he admits this to Sansa, praising her for recruiting the Knights of the Vale, even if it meant dealing with the decidedly dishonorable Littlefinger). Still, Sansa’s wrath is worth far more than tactical acumen. It is shared by anyone who has ever been brutalized without recourse, who has seen the wicked-doers walk free far too many times, and it builds a fresh dimension to the ways that survivors are portrayed on-screen.

Sansa is neither a martyr or an avenging angel—which are, by and large, the most prevalent kinds of onscreen survivorship. She occupies a space between these opposing modes, a space she shares with so many of us in the real world—a space between our broken places. Her strength feels so satisfying to viewers who have watched her be so mercilessly abused—but it is a many-chambered strength, and some of those rooms hold a deep, unpitying anger. This anger emerges when she kills Ramsay, of course, and it is in her voice when she says that the Umbers who gave Rickon to the Boltons should be hanged; it is in her threat to have her protector, Brienne, kill Littlefinger where he stands (the only reason she spares him, arguably, is to keep the Knights of the Vale in play). If she has, as Littlefinger once told her, been a bystander to tragedy, she has also been a bystander to power—and observed firsthand how it can insulate even a worthless little peon like Joffrey, or make a woman like Cersei’s will the law of the land.

Cersei and Sansa were initially portrayed as opposites—the soft, daydreaming princess and the hard-bitten, bitter-hearted queen—but in this season there was been a kind of alignment between the two. Both women have emerged from captivity determined to make the agents of their violations pay with blood. And both women crave the security and control that can come from a throne—though, admittedly, Sansa’s craving is more nascent, Littlefinger still knows that the way to pique her interest, however slightly, after she quite wisely rejects his offer of marriage, is to suggest that she could be the Queen in the North (and that he could make her that queen). She loves her half-brother and, in one of the sweeter scenes in the series, assures him that, bastard or no, he will always be a Stark to her—he will always share her blood. When he is crowned King in the North, she smiles at him with genuine joy. Then she looks out at Littlefinger, and the smile slips into a more arctic, inscrutable expression. There is a part of her, like a muscular tendril pushing up through unthawed earth, that demands to be honored and respected, that demands tribute. And to know that, with all of these things, she will never again be subject to anyone’s whims but her own.

As "Game of Thrones" enters its final episodes, Sansa Stark remains one of its most dynamic, complex female leads in a show rich with queens. She hasn’t been broken against the rock of her trauma. She is a knife-blade sharpened against the blunt horror of her experience. And she is uniquely positioned as a bracingly human exemplar of surviving trauma: able to love and hope in measured ways, hell-bent on protecting herself, and yes, capable of a fury to match the magnitude of the indignities she’s endured. I hope she doesn’t go full Cersei, though if she does, it will be undeniably compelling (and maybe, if you squint hard enough, just the tiniest bit deserved). If the show serves her well, it will keep her in that fertile ground between her broken places, between the quest for autonomy and the zeal for vengeance. For so long, her greatest feat in the great game has simply been drawing another breath, and then another one after that—in the next seasons, Sansa should do more than survive. Whether she becomes the Queen in the North, Jon Snow’s ruthless advisor, or simply her own woman, no more, no less—she should do what her long-time fans have always wanted for her: Thrive.