Socialism or barbarism: Only the left can defeat the rise of the radical right

Brexit has taught us an important lesson: There are historic openings for the left — and also enormous challenges 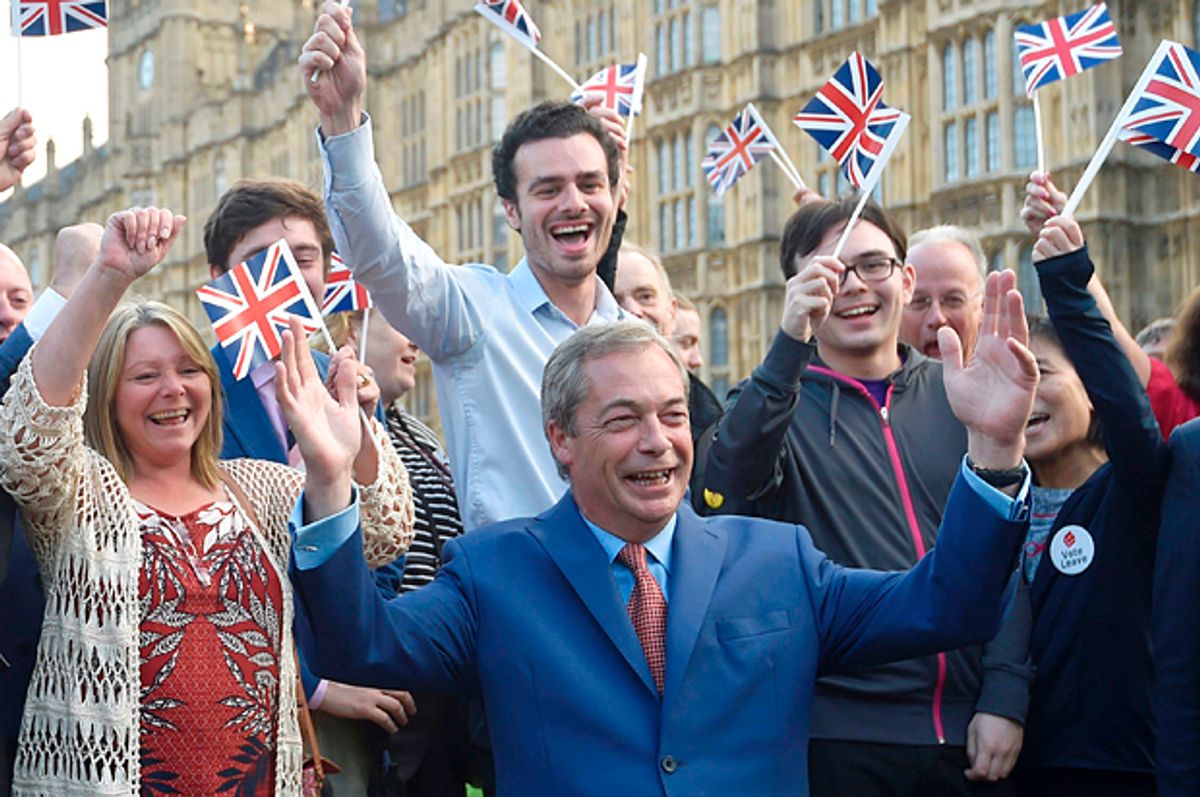 President Obama pointed to globalization’s losers in an effort to explain the United Kingdom’s vote to leave the European Union, which took place just a few weeks before Republicans are expected to officially christen Donald Trump their nominee. Among elites on both sides of the Atlantic, there is a growing recognition that an economic order enriching the few on the backs of the many has made many of the latter profoundly unhappy.

Widespread elite introspection over inequality and immiseration is a bit late. And it mostly shies away from offering much in the way of concrete solutions to confront the radical right, which peddles racism and xenophobia as a tangible frame through which people can understand abstruse economic and social crises. Elites elide solutions, however, for a simple reason: the global economic and security architecture do not contain the solutions to problems of their own making. Predictably, the arsonists are making a bid to put out the fire.

“The political center has lost its power to persuade and its essential means of connection to the people it seeks to represent,” wrote Tony Blair in the New York Times, casting about, amidst the human wreckage of the Iraq War and big finance, for someone who still cares what he thinks. “Instead, we are seeing a convergence of the far left and far right. The right attacks immigrants while the left rails at bankers, but the spirit of insurgency, the venting of anger at those in power and the addiction to simple, demagogic answers to complex problems are the same for both extremes. Underlying it all is a shared hostility to globalization.”

Blair is right about the shared hostility to globalization. But he can’t accept that, morally and politically, hatred of bankers and hatred of immigrants are two very different things — and that the left therefore offers a much better solution than the right. Blair offers no solution at all beyond pablum about the center needing to “regain its political traction…and find solutions that rise above the populist anger.”

Better communicating the status quo clearly won’t do. The European center is now preaching understanding and solidarity. But after years of the troika dividing the continent between worthy creditors and slothful debtors—or as Paul Ryan might phrase it, makers and takers — and extending a giant fiscal middle finger southward, the gestures will prove unconvincing.

Globalization and war have unleashed a tidal wave of capital and human migration. The prevailing view is that public and private technocrats generate wealth and politics in the ether. The problems are, as Blair writes, “complex.” But they are complex not because people are wrong to be angry at capital but because financialized capitalism is intentionally complicated. By contrast, scapegoating immigrants is simple. The political question is whether people will pin the blame for their problems on people fleeing conflict and seeking jobs or on big business and financial institutions undermining their lives.

In the United States and Europe, change is certain, though the outcome decidedly is not. In moments of political realignment, old norms are shattered and, for better and for worse, ideas that were once thought impossible become imaginable. : coalition-building, fighting off the establishment and far right to win power, and— the trickiest of all — governing.

In the U.S., it has become increasingly clear that Hillary Clinton shares not only the failed Remain campaign’s lukewarm slogan “Stronger Together” but also its failed appeals to stability, incremental change and fear of radical right chaos. As the Times put it, “prudence is cold comfort to people fed up with more-of-the-same.”

This, of course, is not news to left-wing supporters of Bernie Sanders. Early on, leftists argued that Clinton’s purported advantage against a Republican in terms of electability was based on outmoded assumptions. It’s increasingly clear that this is true. Clinton remains the strong favorite. But the establishment would be ill-advised to just wait for demographic deliverance in the form of angry white workers dying off. Anger also prevails amongst young people, most definitely including those of color, as Black Lives Matter, Occupy and millennials’ preference for Sanders’ democratic socialism reminds.

The same holds true in Europe, where right-wing parties in the U.K. and France pose among the greatest threats. In Spain, the left-wing party Podemos, despite falling short of projections in Sunday’s vote, nips at the heels of a European-establishment aligned Socialist Party just two years after its founding. In Greece, the leftist Syriza party, despite failing to overturn brutal austerity conditions while in power coincided with the continued electoral marginalization of the fascist party Golden Dawn.

By contrast, while France has recently witnessed mass youth and labor mobilization it lacks a new left-wing party to frame the economic crisis in class terms at the ballot box. The upshot is a political conflict in large part defined by the center, led by Francois Hollande’s sclerotic and neoliberal Socialists, fending off Marine Le Pen’s insurgent National Front.

In the U.K., Jeremy Corbyn rode a successful left-wing insurgency into leadership in 2015. But Corbyn heads a parliamentary block that has been insubordinate since day one and now, after the Remain campaign’s defeat, openly rebellious ahead of possible snap elections. The Brexit campaign compounded the Labour left’s weakness, narrowing the political contest to a fight between cosmopolitan finance and business on the one side and radical right-wing populism on the other. The British left, Euroskeptical for the right reasons, had the difficult task of crafting an independent argument that simultaneously criticized the EU and called for the U.K. to, for the present, remain within it. They failed to do so.

Trump was, by coincidence of owning a golf course, in Scotland when Brexit won, crowing over the new visitors a devalued pound will draw to his resort and congratulating the U.K. for having “took back their country.”

If nobody knows who the bad guys are, the left’s job is to name them. Clinton will likely defeat Trump in November. Defeating Trumpism, however, will require a powerful vision for transformative change. Instability will only increase as global warming disrupts the ecological foundation of people’s lives and millions of refugees and migrants flee a swath of disintegrating nation states stretching from Africa through the Middle East to South Asia. Racist and xenophobic hate can’t be defeated unless the cresting anger is organized to fight the super-rich and not one another.