Brexit vs. Braveheart: Will the Celtic nations seek revenge on England for its historic blunder?

Scotland plots a course toward independence and Ireland ponders unity, while Wales voted "Leave" from the left 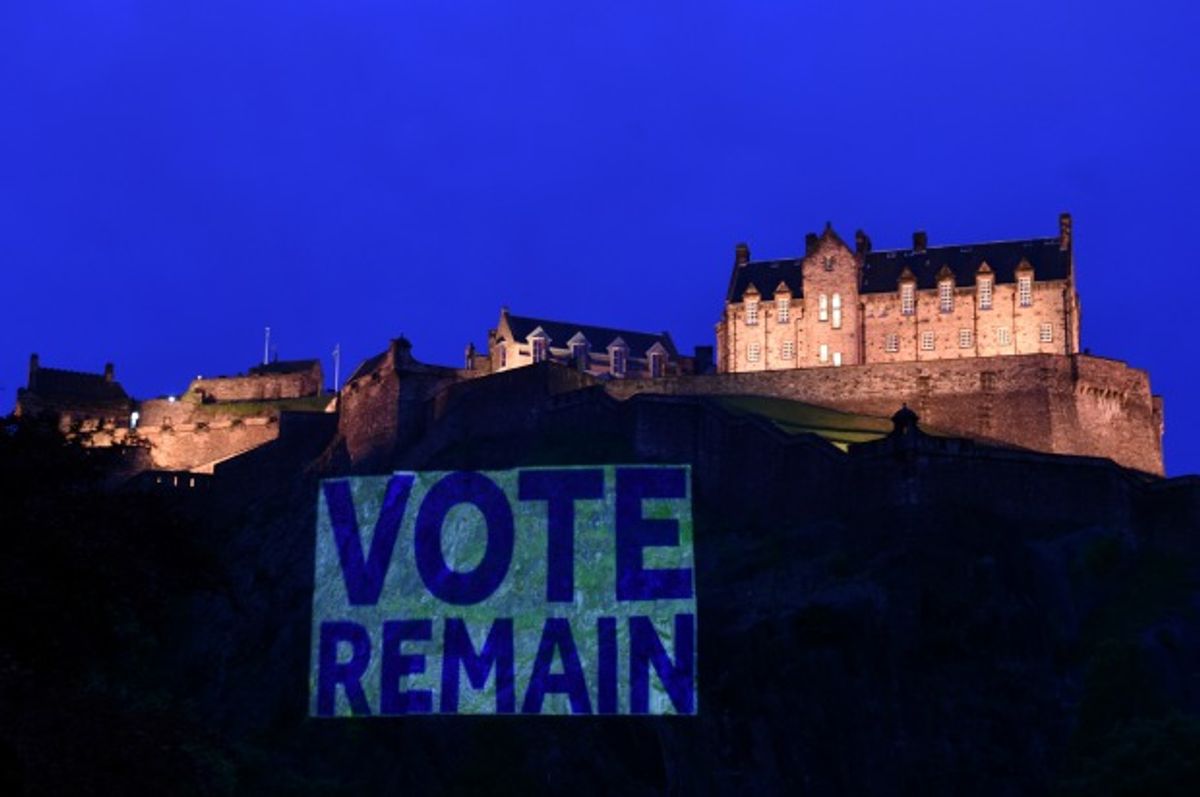 In the wake of Britain’s startling vote last week to leave the European Union — which even took most “Leave” supporters by surprise — the entire nation finds itself in an uproar. That very much includes the professional historians who will presumably be entrusted, somewhere down the line, with explaining what just happened. “Everyone I’ve spoken to is in a state of shock,” says Tom Bartlett, a professor emeritus of history at the University of Aberdeen in Scotland, and a leading authority on British-Irish relations. “No one has a clue where to go now.” Fearghal McGarry, a historian at Queen's University in Belfast, adds, "Anyone who explains to you right now how Brexit is going to move forward is likely to look foolish in a year or two."

Many people in Britain are already calling for a repeat referendum, apparently on the principle that the whole country got drunk last Thursday and now repents of its actions. (Anyone who has spent significant time in Britain would admit this seems plausible.) Others have observed that the British Parliament has no legal obligation to do what the public has apparently demanded. Even in a society still bound by the remnants of a centuries-old class system, I don’t think “yes, you silly people, we had a referendum but we didn’t really mean it” will play particularly well.

McGarry, who has written several major books on Irish history, observes that one possibility already floated by the victorious Leave campaign is negotiating a new deal with Europe that “might not look terribly different from the relationship that exists now.” If the deal that emerges "retains British access to the single market and freedom of labor across national borders," he adds, that leads to an obvious question: “What was it all for?”

Both of Britain’s major political parties find themselves in a state of total meltdown: Conservative Prime Minister David Cameron bet his political future on a “Remain” vote, which I guess proves that an upper-crust upbringing and an expensive education doesn’t make you smart. On the other hand, Cameron sounded positively giddy about his impending resignation during the delightful British ritual of Prime Minister’s Questions on Wednesday, quoting Smiths lyrics and challenging opposition leader Jeremy Corbyn to meet him “at the cemetery gates.” Whoever replaces Cameron as Tory leader will also become prime minister, at least for now, and faces the unpalatable choice between enacting a policy the party’s City of London financial backers abhor or ignoring the expressed will of the electorate.

Meanwhile Corbyn, the left-wing insurgent who has been at the Labor Party helm barely nine months, is embroiled in his own post-Brexit crisis. He was a tepid supporter of the “Remain” campaign at best, and is widely suspected of having followed his old-school socialist heart to “Leave” in the privacy of the voting booth. After losing a confidence vote among his own party’s members of Parliament this week, Corbyn now faces an intra-party insurrection and another leadership election, in which the mainstream Labor center-left hopes to regain power. That’s not going to end well no matter what happens: Either the party’s London power structure or its rank-and-file membership will come out of this struggle bitterly unhappy. (Which is, yeah, not entirely unlike the Democratic Party.)

All that London political soap opera is juicy. But I reached out to scholars like McGarry and Bartlett because Britain and England are not the same thing. One of the most intriguing post-Brexit subplots involves the other nations (or bits of nations, in the case of Northern Ireland) on what used to be called the “Celtic fringe” of the British Isles. Scotland, of course, voted overwhelmingly to remain in the E.U., although not quite as overwhelmingly as the “Remain” campaign had hoped. Scottish Nationalist leader Nicola Sturgeon has already suggested a new referendum on full independence for Scotland, less than two years after the last one was defeated. A leading JP Morgan analyst wrote to his financial clients this week that the firm now assumes a “base case” in which Scotland separates from the United Kingdom, sets up its own currency and rejoins the E.U., all before the year 2020.

But each of the three Celtic nations of Britain is a special case that underscores the fragility of that strange and antique political entity. If a wave of Celtic payback is on the way, to punish the smug “Little England” bigotry and nostalgia that (in some cases) drove the “Leave” campaign, it will take different forms in different places. Voting patterns across the U.K. defied any rational analysis, says McGarry. “Some of those who voted to leave will probably be most disadvantaged by the consequences, by what’s likely to happen,” he adds. “There’s a tendency to assume that people will vote in their rational interests, but factors like culture and identity tend to cut against that.” (Do I need to bring up the parallels to Trump and the contemporary Republican Party? I didn’t think so.)

Northern Ireland, where McGarry lives and works, is a divided province of a divided country that has seen significant economic growth since the end of the sectarian civil war known as the “Troubles” in the mid-‘90s. It voted to remain in Europe, which may reawaken the nationalist dream of a united Ireland, almost a century after its political partition. McGarry says he’s surprised the result wasn’t even more one-sided. “A significant section of the Northern Ireland population voted to leave, about 45 percent,” he says. “It strikes me that was largely a Unionist vote [meaning Irish Protestants who want to remain in the U.K.], and that Unionists are putting their dislike of the E.U. ahead of a potential threat to the stability of the Union. I find that very surprising.” Although it’s unlikely that the bloodshed of the 1970s and ‘80s will return, the sectarian bitterness that fueled the Irish conflict lingers on under the surface, and this seems to be the decade when unlikely things happen with regularity.

Then there is the peculiar case of Wales, a beautiful country with a long tradition of working-class activism and a rich cultural and linguistic heritage, which once again finds itself Britain’s odd man out. If you look at the numbers, it appears that the Welsh voted to leave in virtually the same proportions as the rest of Britain did. But behind the raw vote totals lies a complicated tale of a small, struggling nation undergoing an identity crisis, well explained in this essay by Ellie Mae O'Hagan for the Independent. In brief, rural regions of the north and west, the home of Welsh nationalism and the Welsh language, voted to remain in Europe, while depressed industrial regions of South Wales, which are largely English-speaking and dominated by English culture, voted to leave.

“Across England and Wales,” says McGarry, “you can see a strong pattern of economically depressed areas with relatively little immigration voting to leave.” Wales has long been a stronghold of the Labor Party, which was clearly unable to get its supporters to vote Remain in large enough numbers. So while the voting patterns appear irrational, you can’t assume that racism and xenophobia were the only important factors. “A lot of people were voting for things that are not directly connected to Europe,” McGarry continues. “They're voting out of their sense of political disconnection, they're voting because they feel that they've lost out through globalization. I don't think the political elite anticipated that all these things would converge around this referendum.”

People on the left, McGarry says, should resist the temptation to express “contempt toward these people who are responding to the economic predicament of being left behind, feeling not represented, feeling that they don't have much of a future. When you look at the spatial map of how people voted, there's nothing irrational about people in areas that have been left behind for decades now rejecting the current economic and political status quo.”

In the spirit of Celtic solidarity and to placate the ghost of my dad — who spoke both Irish and Welsh, and could probably fake Scots Gaelic and a little Breton as well — I would like to insist that we can’t overlook the true abandoned stepchildren of the Celtic world, the Cornish and the Manx. Except that there isn’t much to say about them. Cornwall, on the extreme southwestern toe of England, voted 56 percent “Leave,” significantly higher than the nation as a whole, even though it’s one of the U.K.’s poorest regions and receives about $82 million a year in direct E.U. subsidies for infrastructure, education and economic development. Which sums up the shortsightedness and stupidity of the whole Brexit phenomenon in one sentence. The Isle of Man is something called a “Crown dependency” and was never in the E.U. in the first place, so the Manx didn’t get to vote. I can only hope my aunts and cousins in Dublin can still go there to play the slots and buy cheap cigarettes.

Scotland has gotten plenty of attention both before and after the Brexit vote, including the bizarre spectacle of Donald Trump’s visit to his golf resort at Turnberry, which was attention most Scots could have done without. Voters in England were repeatedly told that Scotland might bolt the U.K. if Brexit actually happened, and apparently decided that if the whisky was still for sale and if they could pop across the border for a golfing holiday once in a while, they simply didn’t care.

Let me set aside the traditional rivalry between the Irish and the Scots to observe that Scotland has accomplished something remarkable, which may ultimately serve as an example for Britain, Europe and the world. Perhaps because of the long-running debate over independence — which is about to enter a new chapter — Scotland has built an identity as a 21st-century nation with traditional roots and a traditional culture, that is also multicultural, cosmopolitan and connected to the outside world. Lots of people in London and Manchester and Liverpool thought their nation was like that too, of course, but have just received a telegram informing them otherwise.

That’s a bit simplistic, no doubt. I don’t need Scottish readers to remind me that some areas of Glasgow are truly dire or that there’s too much Trump-style resort development or that not all immigrants have been welcomed with open arms. But with the rest of Britain (and, let’s face it, a whole bunch of America) trying to crawl into an imaginary past like frightened children, the nation of bagpipes and kilts and haggis looks to the future like grownups.