Donald Trump can't talk this away: The self-proclaimed billionaire is no philanthropist 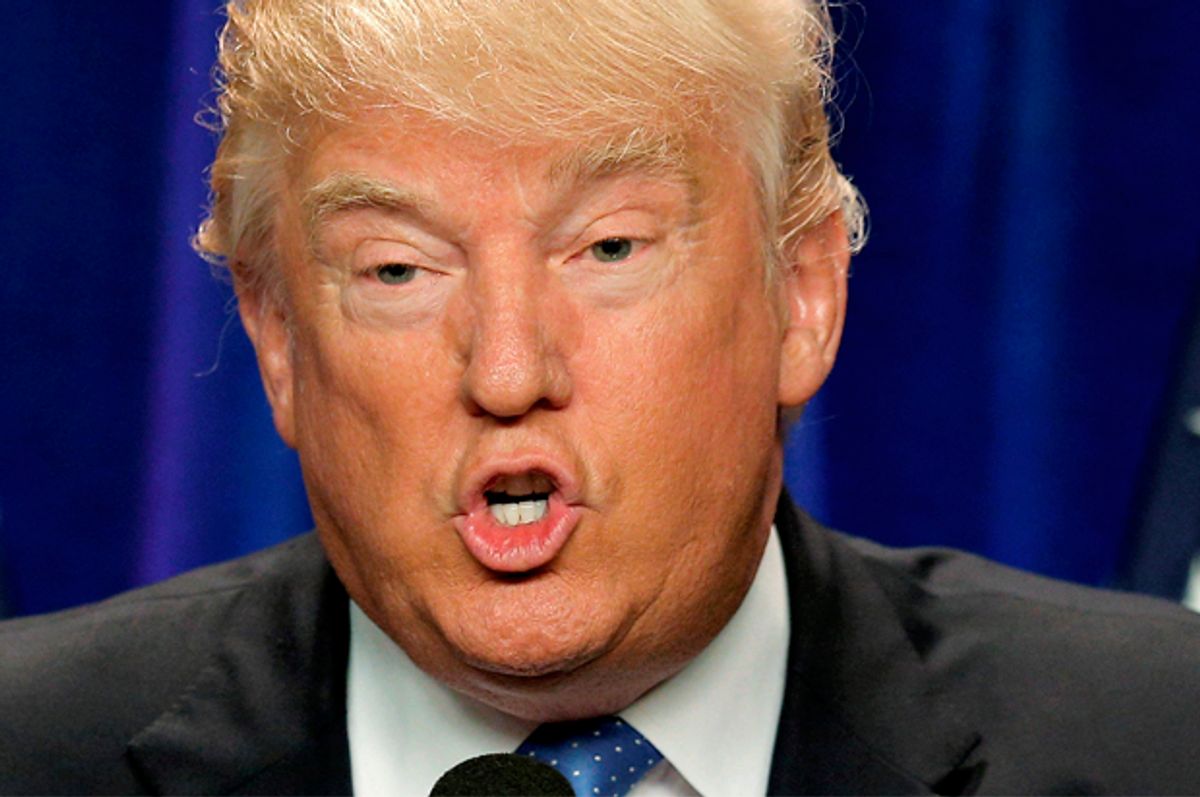 Recently, Donald Trump got into hot water after the media pressed him about money he claimed to have raised for veterans. The GOP presidential nominee previously said he raised nearly $6 million—$1 million of it from his own coffers—for veterans’ groups, but a full four months later not a dollar had been sent, the Washington Post discovered, so they called him on it. Trump responded by holding a press conference during which he insulted members of the media and banned the Washington Post from future campaign events. He also finally, begrudgingly, cut a check for the veterans’ groups. Then he complained he was the victim in the situation.

“Instead of being like, Thank you very much, Mr. Trump, or Trump did a good job, everyone’s saying, Who got it, who got it, who got it?" Trump said during a news conference at Trump Tower. “And you make me look very bad. I have never received such bad publicity for doing such a good job.”

Pretty much since he became a media figure, Trump has talked a massive game about his charitable giving. Billionaires are not generally known for their humility, so if the guy wants to boast about how generous he is, it might be a minor price to pay for all the good causes he’s supported. Except that a new Washington Post report finds, despite all his bragging, Trump barely gives out any money at all. In fact, over the last seven years, the alleged billionaire has donated less $10,000.

The Post notes that over the last decade and a half, Trump has claimed he would pony up money from his various ventures—including “The Apprentice,” Trump vodka, Trump University and more—to worthwhile charities. “If he honored all those pledges,” the Post writes, “Trump’s gifts to charity would have topped $8.5 million.”

Instead, Trump has only given $2.8 million to his own foundation, and the last time the Post could find any record of his giving to the organization was back in 2008. Since Trump won’t release his taxes, which would offer proof of any personal charitable giving, the Post decided to do some digging on its own. Looking back at Trump’s record of giving since the late 1980s, the paper found a pattern of philanthropic promises that went totally unfulfilled.

In the 1980s, Trump pledged to give away royalties from his first book to fight AIDS and multiple sclerosis. But he gave less to those causes than he did to his older daughter’s ballet school.

In recent years, Trump’s follow-through on his promises has been seemingly nonexistent.

The Post contacted 167 charities searching for evidence of personal gifts from Trump in the period between 2008 and this May. The Post sought out charities that had some link to Trump, either because he had given them his foundation’s money, appeared at their charity galas or praised them publicly.

As the Post notes, when coupled with the $1 million Trump finally coughed up for vets recently, that brings his charity donations to $3.8 million since 2001. For a guy who talks endlessly about his generosity, that pales in comparison to the amount of philanthropic giving from more tight-lipped wealthy donors, such as, “hedge fund titan Stanley Druckenmiller, just behind Trump on Forbes’s rankings of net worth, gave $120 million to his foundation in 2013 alone.” In fact, Prince probably gave out more money in just the last few years than Trump has given in 15 years.