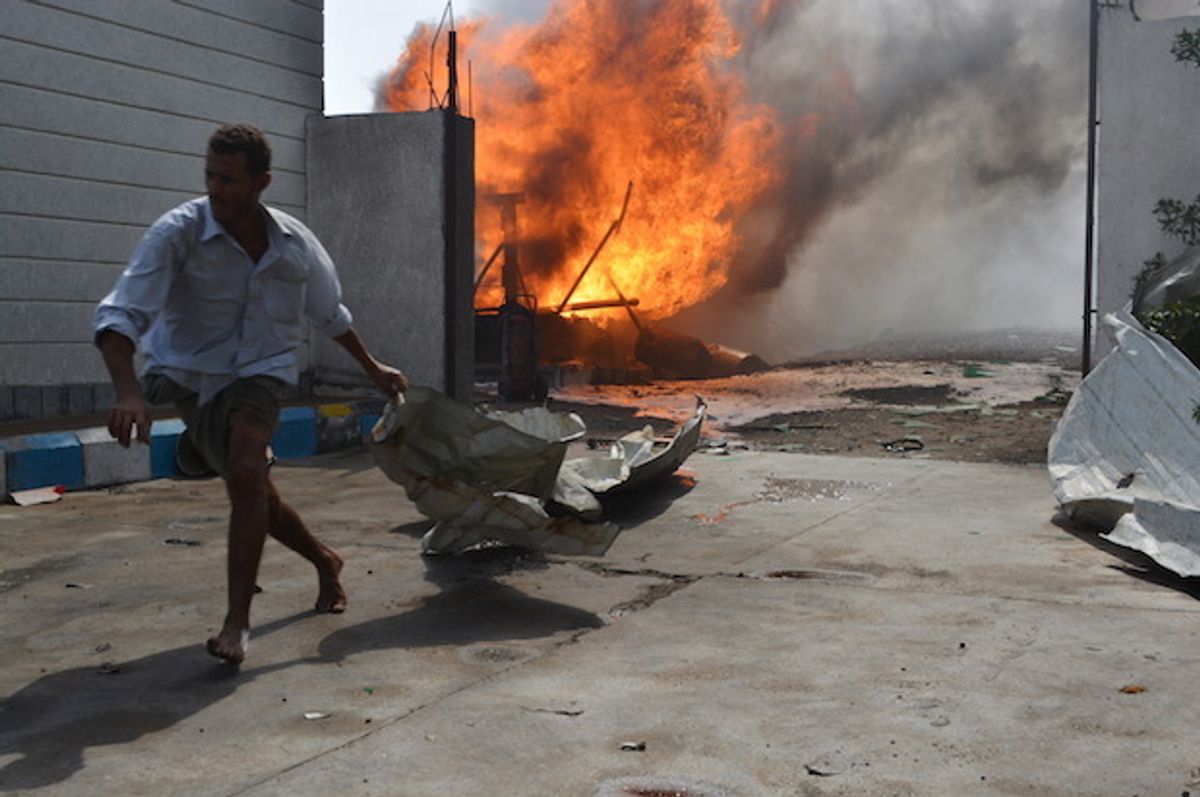 A Yemeni man flees a gas station after it was hit by a Saudi-led coalition airstrike in Houdieda, Yemen on February 5, 2016 (Reuters/Abduljabbar Zeyad)
--

Amnesty International and Human Rights Watch have called on the United Nations General Assembly to immediately suspend Saudi Arabia from the Human Rights Council over its "gross and systematic violations of human rights abroad and at home."

Representatives from Amnesty and Human Rights Watch spoke at a joint press conference at the U.N. on Wednesday.

"The credibility of the U.N. Human Rights Council is at stake," warned Richard Bennett, head of Amnesty’s U.N. Office. "Since joining the council, Saudi Arabia’s dire human rights record at home has continued to deteriorate and the coalition it leads has unlawfully killed and injured thousands of civilians in the conflict in Yemen."

"To allow it to remain an active member of the council, where it has used this position to shield itself from accountability for possible war crimes, smacks of deep hypocrisy. It would bring the world’s top human rights body into disrepute," he added.

Since March 26, 2015, Saudi Arabia has led a U.S.-backed coalition that has rained bombs down upon Yemen, the poorest country in the Middle East. Amnesty and Human Rights Watch say the coalition has violated international humanitarian law in its attacks, indiscriminately and disproportionately killing and injuring civilians.

The rights groups also stressed that the Western-backed, Saudi-led coalition has repeatedly used internationally banned cluster munitions in civilian areas. Amnesty and Human Rights Watch have documented 19 different attacks using at least six different types of cluster bombs, which were made in the U.S., U.K. and Brazil.

They condemned the U.S. and U.K., close allies of Saudi Arabia, for refusing to halt arms transfers to the coalition despite the thorough evidence of war crimes. Both the U.S. and the U.K. are providing support and intelligence to the coalition, and American and British military officials are physically in the command room for Saudi air strikes, where they have access to a list of targets.

In Yemen, hospitals, schools, weddings, residential neighborhoods, markets, refugee camps and even an Oxfam humanitarian aid warehouse have been bombed by the U.S.-back Saudi-led coalition.

Amnesty and Human Rights Watch also noted that, despite "the strong evidence of the commission of war crimes by the Saudi Arabian-led coalition in Yemen," the UNHRC has not investigated, because the Saudi regime exploited its membership to undermine a resolution that would have created an international inquiry.

Instead, Saudi Arabia and its allies, led by the U.S., created a national commission of inquiry in Yemen, which is being carried out by the Saudi-backed government of Yemeni President Abd Rabbuh Mansur Hadi, who fled to Saudi Arabia when the war began.

Richard Bennett, Amnesty's U.N. officer, called this national inquiry "toothless" and emphasized that, after nine months, it "has failed to credibly investigate allegations of war crimes and other serious violations."

A report by UNICEF found that an average of six Yemeni children have been killed or injured every day in the war.

U.N. High Commissioner for Human Rights Zeid Ra’ad al-Hussein said "we are possibly looking at the commission of international crimes by members of the coalition."

In addition to, with the help of the U.S., blocking an international investigation into its war crimes, Saudi Arabia also financially blackmailed the U.N. in early June to remove it from the U.N.'s list of states and armed groups that have violated the human rights of children.

The oil-rich regime threatened to withdraw all of its financial support for humanitarian projects, holding hostage aid programs for Palestinians in particular. Secretary-General Ban Ki-moon gave in, and took the Saudi monarchy off the U.N.'s list of child-killers.

"Saudi Arabia’s harsh crackdown on all forms of dissent at home has continued unabated throughout its current membership" in U.N. Human Rights Council, he added.

Since it was elected to the UNHRC, the Saudi regime has executed more than 350 people, mostly by beheadings. 2015 saw its highest record of killings since 1995.

In fact, the Saudi Ministry of Interior stated clearly in 2014 provisions that contacting “any groups… or individuals hostile to” Saudi Arabia is a “terrorist crime.”

"Saudi Arabia also continues to discriminate against women in law and practice, including through the imposition of the male guardianship system, which treats all adult women as legal minors," the rights groups added. And "discrimination against the Shi’a minority remains systematic and entrenched."

They called on Saudi Arabia to release its prisoners of conscience immediately and unconditionally, and to cease using the death penalty.

“What’s particularly shocking is the deafening silence of the international community which has time and again ceded to pressure from Saudi Arabia and put business, arms and trade deals before human rights despite the Kingdom’s record of committing gross and systematic violations with complete impunity,” said Bennett, head of Amnesty's U.N. office.

Amnesty International and Human Rights Watch called on U.N. member states to vote to suspend Saudi Arabia from the UNHRC, and to create an independent, impartial international inquiry into violations of international humanitarian law in Yemen.