The pope's moral confusion: He should be applauded for his pro-LBGT remarks — but he didn't go far enough

Beyond an apology, the pope ought to denounce the doctrines that engender discrimination against gays 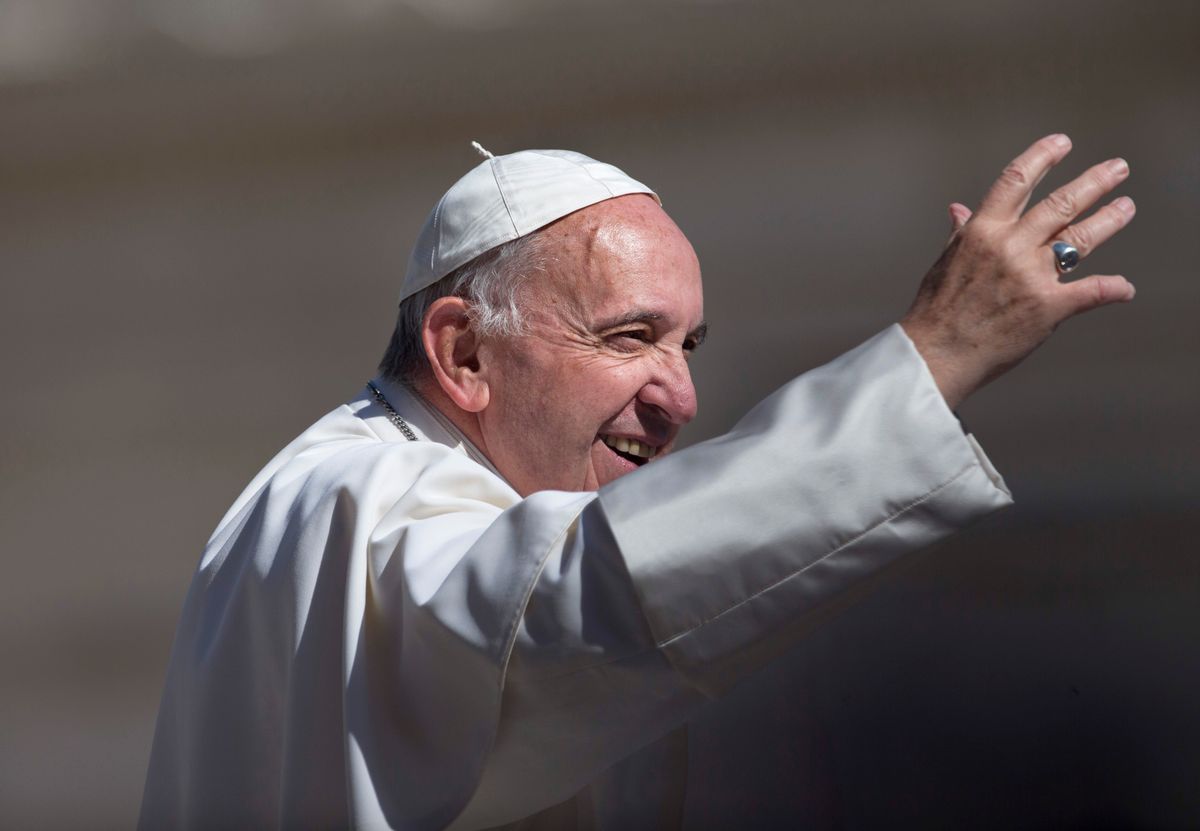 Pope Francis waves to the crowd as he arrives for his weekly general audience in St. Peter's Square at the Vatican, Wednesday, May 18, 2016. (AP Photo/Alessandra Tarantino) (AP)
--

Pope Francis has been a breath of fresh air for progressive Catholics and liberal secularists. He's made encouraging noises on a number of hot-button topics – climate change, poverty, inequality, and economic justice. This weekend he extended an olive branch of sorts to the LGBT community.

Speaking with reporters aboard the Papal plane, Francis said that Christians owe LGBT people an apology. “I repeat what the Catechism of the Catholic Church says: that they must not be discriminated against, that they must be respected and accompanied pastorally...The Church must ask forgiveness for not behaving many times – when I say the Church, I mean Christians! The Church is holy, we are sinners!” He added: “I believe that the church not only should apologize to the person who is gay whom it has offended, but has to apologize to the poor, to exploited women, to children exploited for labor; it has to ask forgiveness for having blessed many weapons.”

The pope is a good man doing his best to turn an archaic institution around, but there's no avoiding an ugly truth: Christians condemn gay people not because of what they do but because of who they are, and they do so for purely theological reasons. Millions of Christians offer solidarity and love to LGBT people, but that's an ethical intuition they bring to their faith from outside it. They do what most decent religious people do: pirouette around the parts of the Bible they find violent or regressive.

It's no accident that non-religious people tend to be less judgmental of LGBT Americans. A 2015 Pew Research Center study examined levels of acceptance of homosexuality among religious and non-religious groups. The results are revealing: In 2014, the two groups most likely to accept homosexuality were atheists (94 percent) and agnostics (94 percent). The two groups least likely to accept homosexuality were Jehovah's Witnesses (16 percent) and Mormons (36 percent), followed closely by Evangelicals (36 percent). To be fair, Catholics were the most accepting of Christian sects (70 percent), but they still lag behind atheists and nearly all non-Christian faiths. And, as ThinkProgress reported, Catholic institutions across the country continue to fire people on account of their sexuality.

Again, this isn't surprising. Intolerance of gay people is byproduct of religious instruction. It's sanctioned in the holy books and it's codified in church doctrines. Despite his agreeable tone, the pope affirmed this in his comments over the weekend. “But these are things that have nothing to do with the problem,” he said. “The problem is a person that has a condition [emphasis mine], that has good will and who seeks God, who are we to judge?” Here Francis implies that homosexuality is a condition, something into which one falls. But this is as morally confused as it is empirically wrong. Homosexuality isn't a condition anymore than it's a lifestyle; it's a natural disposition and a form of love, as valid as any other. Calling for compassion while refusing to acknowledge this is a wasted opportunity at best and a moral travesty at worse.

The Church's position on homosexuality illustrates why it's so important to link ethical claims to the reality of human suffering. Religious people often confuse doctrinal obedience with ethical responsibility, but these are different things. There is no ethical reason to judge a gay person on account of his or her homosexuality. And yet religion gives good people bad reasons to do just that. When Francis said gay people need pastoral care, what he means is that they're fallen and need spiritual guidance. But that assumes they're broken or defective. What gay people need is what all people need: love. What Francis offered was judgment masquerading as compassion.

Absent a meaningful theological shift within the church, nothing the pope says or does will suffice. Ideas matter. Dogmas matter. You can't fault the Church for the all the sins of its members, but to the extent that specific Catholic doctrines are responsible for those sins, the Church is to blame. Thus, if Francis is going to apologize for his church's offenses against gay people, he ought to denounce the doctrines from which those offenses spring.