A tale of two It Girls: Chloë Sevigny, Greta Gerwig and the generational likability divide

Gerwig's zany vulnerability and Sevigny's detached cool reflect not only what we’re like, but what we’d like to be 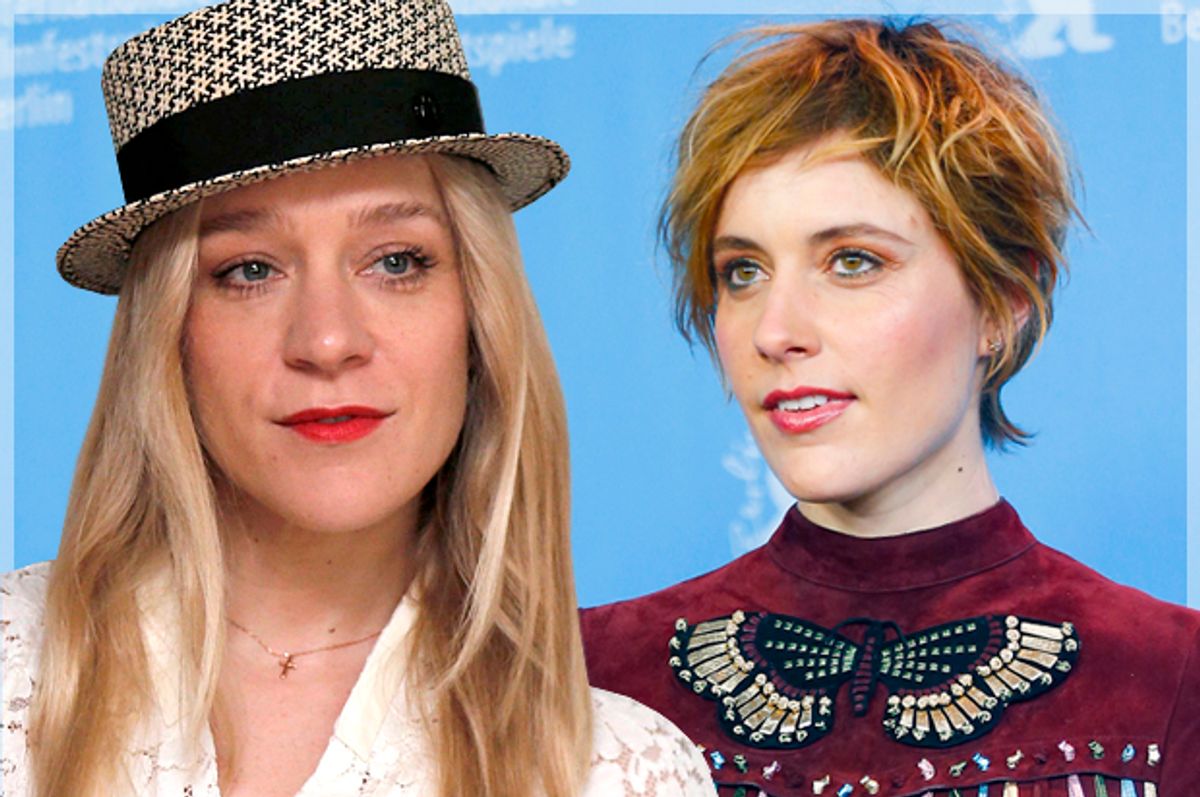 What charms grant the power to channel a zeitgeist? What talismanic guise gifts girl with “It” in the sway of her wrist or tilt of her head? “Unselfconsciousness, and self-confidence,” asserted author Elinor Glyn in 1926 for a story in Cosmopolitan. “And indifference as to whether you’re pleasing or not.”

Over the nine decades since Clara Bow lassoed her boss’s son onscreen, It Girls have often blithely scoffed at standards of pleasing behavior. Take Edie Sedgwick’s pill-popping, Angelina’s pendant of hubbie blood, or Kristen Stewart’s refusal to get a carwash (not a euphemism). For the preternaturally cool, public aplomb (and the work of securing it) has seemed a major waste of coolness. Why care about being liked when time could be spent, like, not caring?

But the climate of cool is changing, perhaps especially for women. These days, the patent aim to please needn’t forecast a public hailstorm. And having some ineffable “It” doesn’t have to mean that you’re shy of 30. This summer, two profoundly different Girls still have got It going on in excess—even when, by most definitions, their girlhoods ended some time ago.

Greta Gerwig, millennial sprite, meet Chloë Sevigny, Gen X sister. You may both be 5’8" blondes with comparably enviable bone structure, but your versions of cool do not comply. And you two could learn from each other.

As far as It goes, the gap between their 32 and 41 might as well be a chasm. Where Gerwig is zany and expressive, Sevigny wields an ironic detachment that defined a generation. Where one made her start in late-aughts mumblecore, the other was scouted in the early ’90s by a Sassy editor smitten with her overalls. The two couldn’t be more opposite had their personas been scripted; think roommates Laverne and Shirley, "Golden Girls” Rose and Blanche, or, given their flaxen manes, Sweet Valley supertwins Jessica and Elizabeth Wakefield.

“Gerwig officially owns her own genre,” affirms Indiewire’s Eric Kohn in a review of her latest effort, “Maggie’s Plan,” a “surrealist-screwball comedy” from director Rebecca Miller.  As in her earlier roles (many of which she wrote, or co-wrote, herself), as Maggie, Gerwig dutifully tills goof turf for gravitas—slapstick swerving into flashes of sincerity. Within the film’s first ten minutes, she shuttles from helping an old man cross the street to hunting down a sperm donor (a bearded Brooklyn “pickle-entrepreneur” resembling an extra from “The Revenant”). “I just felt like she had this frank stolidness,” Gerwig explains to W Magazine of the heroine’s appeal.

Though “stolid” is a questionable term given how bouncily she zips from borough to borough, that sense of contradiction is key to the actor’s allure. Directing an academic-administrative branch of the New School—a “bridge between art and commerce”— Maggie serves as allegory for what Gerwig is today: offbeat enough to attract indie directors and accessible enough to help them go mainstream. Openly guileless, Gerwig Girls make clear that they care whether they’re liked—as does the actor and writer herself. “There's probably something wrong with me,” she tells Elle’s Emily Zemler when recounting a history of pilfering tchotchkes (a motif in Noah Baumbach’s “Mistress America,” which she co-wrote and starred in), adding sheepishly, “This makes me sound crazy.”

If there’s one person who doesn’t seem to care if she sounds (or looks) crazy, or at least wouldn’t cop to it if she did, it would be Chloë Sevigny. See her bleached eyebrows circa “Gummo” in 1997, the infamous “Brown Bunny” blow-job of 2003 (for which she’s “no regrets”), or, more recently, her crustacean bikini briefs for a Marfa Journal photoshoot (“Consider the Lobster,” indeed). She exhibits equal lack of shame when it comes to the proverbial resting bitch face; fluent in the countenance long before it ever had a label, it remains one of the actor’s most reliable, and redeeming, qualities. Similarly, both onscreen and off, any effort Sevigny exerts in speech often seems better devoted to staring into space or placidly smoking a Camel.

In pithy Gen X fashion, Sevigny defends the front of presenting one in the first place. “Cool has a certain mystery to it,” she tells The New Yorker. “It’s being removed. To me, the coolest thing is to keep something to yourself.”

Keep something to herself she has, even when courting controversy. In a 2015 interview with V Magazine, she called Cool Girl Jennifer Lawrence “annoying” and “crass,” but what shocked just as much was that Sevigny remained “unfazed” amidst the media hoopla aftermath. More recently, she told The Guardian that she has “total disdain for directors,” citing the exploitative sexist behavior of “so-called auteurs” like Lars von Trier.

A stark exception to said contempt would have to be her pal Whit Stillman, whose fizzy period piece “Love and Friendship” serves Austen fresh with a dash of bitters. In the role of Alicia Johnson, an American who plays confidante to the scandalous Lady Susan (Kate Beckinsale), Sevigny layers insouciance into lavish corsetry. As an actor, she seems about as Georgian as a denim romper, but it couldn’t matter less: her affect is what we’re after, after all.

So what happened in the decade from Chloë to Greta? When did it get cool to flaunt awkwardness as endearing? And how, amidst all the so-called oversharing, has any sense of guarded chic survived?

For starters, the ubiquity of social media has all but mandated conspicuous self-awareness as a posture de rigueur; when strangers can access your public profile, and acquaintances are “friends,” the prospect of maintaining a private air seems virtually impossible. Compared to the “down-low” nature of Sevigny’s ’90s scene, the difference is striking; it’s no wonder she delayed joining Instagram till 2015, claiming she’d rather “kill myself” than Google her own name.

Consider also that whom the “It” is meant to target isn’t static from age to age. In her “Labor of Love: The Invention of Dating,” author Moira Weigel links the rise of the “It” Girl in the early 20th century to the then-novel “idea that your personality might be part of what made you desirable.” Here desirable meant a personality attractive to men, which certainly remains relevant today. But contemporary Girls like Gerwig and Sevigny are arguably just as, if not more, bewitching to other women—reflecting not only what we’re like but what we’d like to be. In that way, the Greta / Chloë poles often appeal to the same women, especially those torn between competing generational values.

“There’s something so pure about you…and a little bit stupid," Maggie is told near the end of the film by Georgette, a Columbia intellectual played by a risibly frosty Julianne Moore. “But I just can't help to like you." What appears “stupid” about Gerwig Girls is how knowingly they make themselves vulnerable—a conscious self-consciousness that, to many a Gen X sensibility, comes across as simultaneously uncool and enviable. Like so many late millennials, Maggie (as Gerwig) does care about whether she is liked, and she doesn’t care if other people know it. At the same time, a woman a generation older can respect and even admire that risk; the performance of nonchalance can take its own hefty toll. “Conversations about likability always assume that there are only two kinds of women in the world,” points out Salon's Arielle Bernstein, “ones who want to be liked, and ones who want something more…. The terms themselves are deliberately vague—what is likable is ultimately subjective, and as we’ve seen in the past few years social pressures for women, and everyone else, can change over time.”

In other words, the fact that both Girls still got It says something for how culture has broadened its borders of How to Be Cool, a province historically admitting precious few demeanors. That Gerwig and Sevigny still got It past thirty and forty also says a lot for how notions of charisma outlast the eras that ushered them. At 32 and 41, the two still very much seem to be Girls, and I say that in the very best way; unmarried and without children, they owe nothing to their ovaries, and their It-ness is grounded in a youthful zest of which neither seem afraid. As Robin Wasserman cogently put it in a recent essay for Lit Hub, “[T]o call yourself “still a girl,” can be empowerment, laying claim to the unencumbered liberties of youth…girlhood can be a battle cry.”

With Chloë and Greta leading the way, it’s time to rally the troops.