Adjunct professorships hurt students and educators alike. Is it time to abandon tenure?

Colleges and universities have seen a boom in contingent faculty. Administrators must rethink their business model 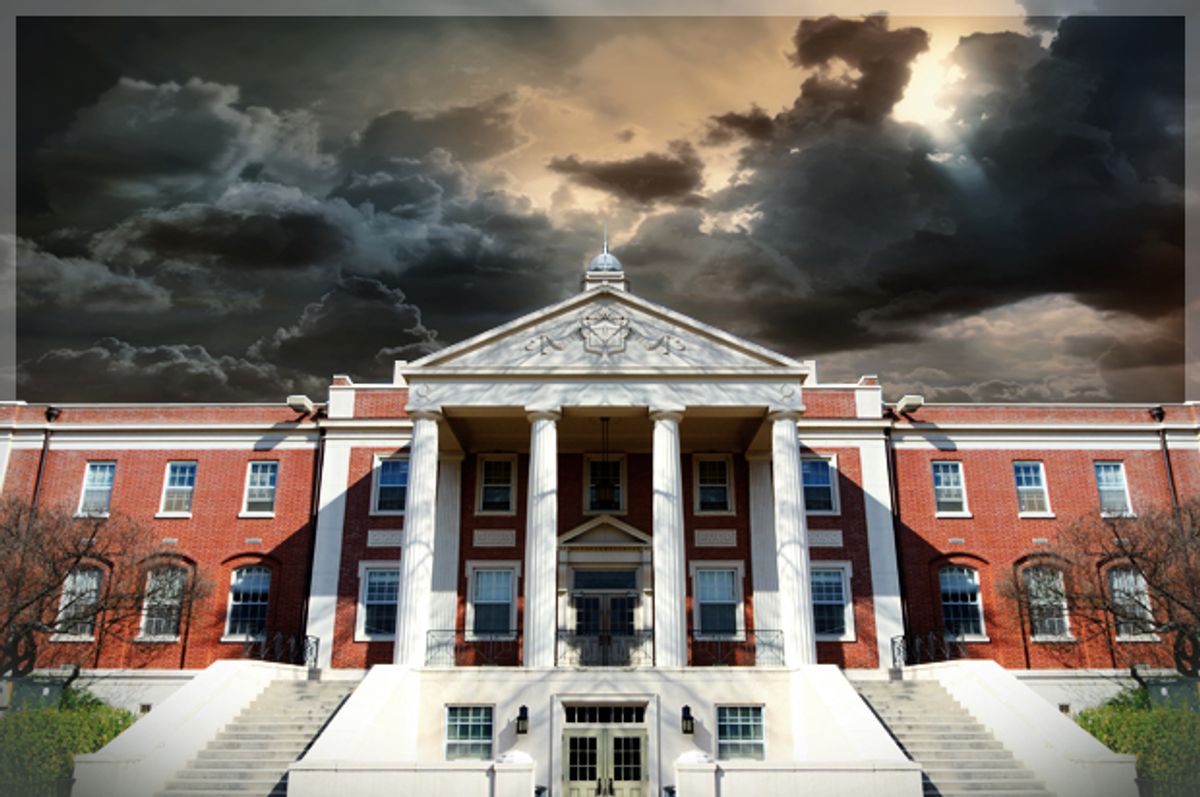 The State College of Florida recently scrapped tenure for incoming faculty. New professors at this public university will be hired on the basis of annual contracts that the school can decline to renew at any time.

The decision has been highly controversial. But this is not the first time tenure has come under attack. In 2015, Wisconsin Governor Scott Walker called for a reevaluation of state laws on tenure and shared governance. As of March 2016, a new policy at the University of Wisconsin has made faculty vulnerable to lay offs.

The tenure system provides lifetime guarantees of employment for faculty members. The purpose is to protect academic freedom – a fundamental value in higher education that allows scholars to explore controversial topics in their research and teaching without fear of being fired.

It also ensures that faculty can voice their opinions with university administration and ensure that academic values are protected, particularly from the increasingly corporate ideals invading higher education institutions.

Our research on the changing profile of university faculty shows that while the university enterprise has transformed dramatically in the last hundred years, the tenure employment model remains largely unchanged. So, has the tenure model become outdated? And if so, is it time to eliminate it altogether?

Tenure-track refers to that class of professors who are hired specifically to pursue tenure, based largely on their potential for producing research. Only 30 percent of faculty are now on the tenure-track, while 70 percent of faculty are “contingent”. Contingent faculty are often referred to as “adjuncts” or “non-tenure track faculty.” They are usually hired with the understanding that tenure is not in their future at that particular university, and they teach either part-time or full-time on a semester-to-semester or yearly basis.

Researchers suggest that the increase in contingent appointments is a result of the tenure model’s failure to adapt with the significant and rapid changes that have occurred in colleges and universities over the last 50 years.

The most significant of these changes is the rise of teaching-focused institutions, the largest growth being in the community college, technical college and urban institutions that have a primary mission to educate students with little or no research mission. Between 1952 and 1972 the number of community colleges in the United States nearly doubled, from 594 to 1141, to accommodate a large increase in student enrollments, leaving four-year institutions to focus on research and development.

Most commentators have described the growth of contingent faculty as a response to financial pressures in the 1990s.

But our research shows that this growth actually began in the 1970s when market fluctuations caused unexpected growths in college enrollment. Between 1945 and 1975, college enrollment increased in the United States by 500 percent. However, rising costs and a recession in the late 1970’s forced administrators to seek out part-time faculty to work for lower wages in order to accommodate these students. The practice increased dramatically thereafter.

In addition to enrollment changes, government funding for higher education decreased in the late 1980s and ‘90s. The demand for new courses and programs was uncertain, and so campuses needed more flexibility in faculty hiring.

Tenure-track faculty incentivized to conduct research were typically not interested in investing time to learn about new teaching technologies. Consequently, a strong demand for online teaching pushed institutions into hiring contingent faculty to fill these roles.

As a result, what we have today is a disparity between the existing incentive structures that reward research-oriented, tenure-track faculty and the increased demand for good teaching.

Recent research on contingent faculty has also identified some consistent and disturbing trends related to student outcomes that illustrate problems related to new faculty workforce models. These include poor performance and lower graduation rates for students who take more courses with contingent faculty, and lower transfer rates from two-year to four-year institutions.

Additionally, studies of contingent faculties’ instructional practices suggest that they tend to use fewer active learning, student-centered teaching approaches. They are also less engaged with new and culturally-sensitive teaching approaches (strategies encouraging acknowledgment of student differences in a way that promotes equity and respect).

Consequently today, when the pool of Ph.D. students is growing, the number of tenure-track positions available for graduates is shrinking. As a result, a disconnect has evolved between the types and number of Ph.D.s on the job market in search of tenure, and the needs of, and jobs available within, colleges and universities.

Some estimates show that recent graduates have less than a 50 percent chance of obtaining a tenure-track position. Furthermore, it is graduates from the top-ranked quarter of graduate schools who make up more than three quarters of tenure-track faculty in the United States and Canada, specifically in the fields of computer science, business and history.

We appear to be at a crossroads. The higher education enterprise has changed, but the traditional tenure model has stayed the same. The truth is that universities need faculty who are dedicated to teaching, but the most persuasive argument in support of tenure – its role in protecting academic freedom– has come to be too narrowly associated with research.

Academic freedom was always meant to extend to the classroom – to allow faculty to teach freely, in line with the search for truth, no matter how controversial the subject matter. Eliminating tenure completely will do little to protect academic values or improve student performance.

Instead, the most promising proposal that has emerged many times over the last 30 years is to rethink the traditional tenure system in a way that would incentivize excellent teaching, and create teaching-intensive tenure-track positions.

Under an incentive system, when considering whether to grant tenure, committees can take into account excellence in teaching, by way of student evaluations, peer review, or teaching awards. For faculty on a teaching-intensive track, tenure decisions would be made based primarily on their teaching, with little or no weight given to research.

Though not every contingent faculty member would be eligible for such positions, these alternative models can change the incentive structures inherent in the academic profession. They may be able to remove the negative stigmas surrounding teaching in the academy and may eliminate the class-based distinctions between research and teaching faculty that have resulted from the traditional tenure model.