Free speech and justice: Defending the rights of the BDS movement

BDS co-founder: Trying to silence followers, as NY Gov. Andrew Cuomo has done, will not break their solidarity 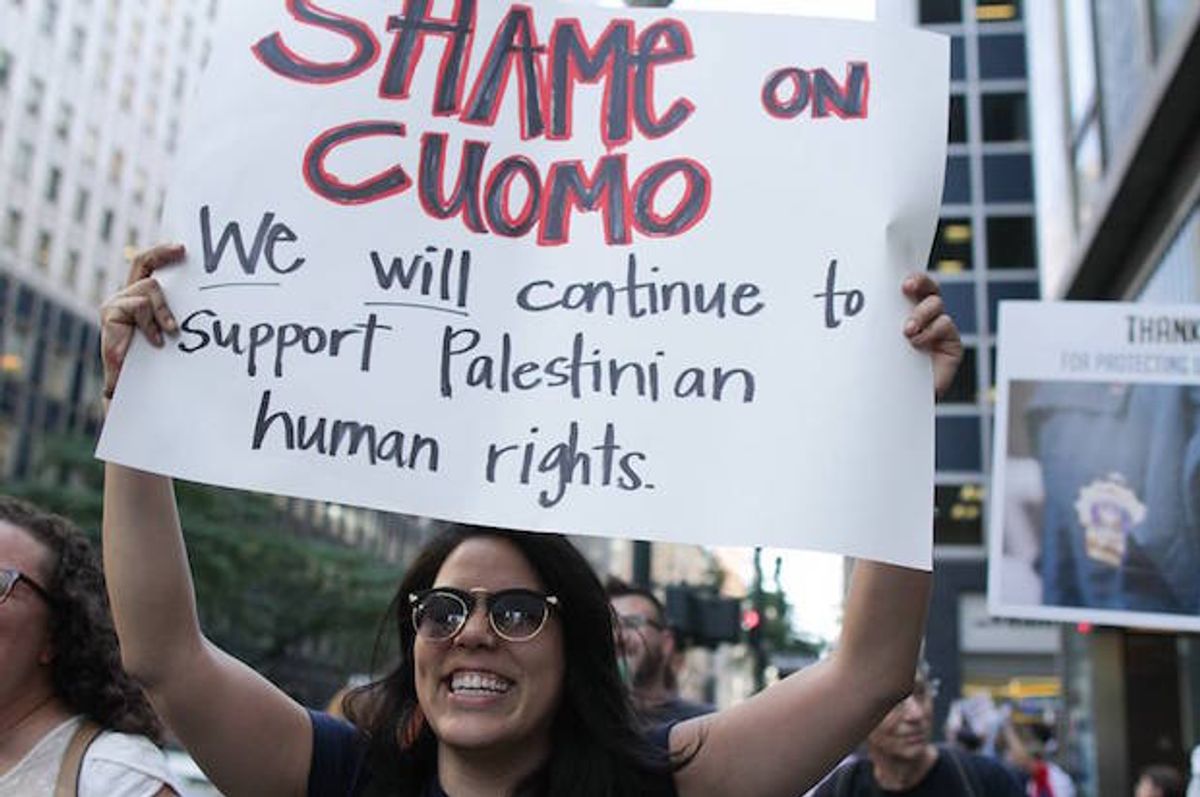 Jana Tamimi, a 10-year-old journalist-in-the-making from the village of Nabi Saleh in the occupied Palestinian territory, asked me during the latest conference of the Boycott, Divestment and Sanctions (BDS) movement for Palestinian rights held in Ramallah last April: “Given the terrible Israeli threats stacked against BDS lately, how can we keep the hope that it gives us alive?” Jana was referring to thinly-veiled official Israeli threats against the movement.

Jana is the youngest of many generations of her family who for years have been peacefully protesting for their freedom from Israel’s occupation and against the encroachment of illegal settlements built on their village’s land. In recent years, younger generations of Palestinians like Jana, who have lived their entire lives under occupation and the specter of a never-ending “peace” process, have found new hope for the future in the BDS movement for Palestinian rights.

I responded without hesitation, “Your very question gives us hope and determination to carry on.”

We maintain this optimism in the face of mounting attacks against BDS, particularly in the US, where the Israeli government and pressure groups have been intensifying efforts to suppress it. The latest broadside comes from New York Gov. Andrew Cuomo, who recently issued an executive order that requires state agencies and authorities to divest from any company or entity that is perceived as supporting BDS.

The American Civil Liberties Union rejected the order, saying it “not only threatens to punish constitutionally protected political speech but also requires the state of New York to create a blacklist of allies of the movement.”

Cuomo’s order bypassed a proposed New York State bill to the same effect that had stalled in the legislature after opposition from the large Freedom to Boycott Coalition, which described it as “McCarthyite, anti-democratic and unconstitutional.”

Similar anti-BDS measures that have been passed by a number of state legislatures come in the context of a new top-down strategy adopted by Israel since 2014 to replace its failed previous strategy of dismissing the movement or fighting it with “branding.”

Ultimately, Israel is intent on not just colonizing our land but also our minds, searing into our consciousness the futility of hope and the impossibility of resisting its hegemonic and unjust order. Hope, after all, can be contagious. Despite decades of dispossession, occupation, and brutalities, Palestinians have not given up; we continue to resist oppression and to assert our quest for equal rights to all humans.

This is precisely why Israel is desperately trying to squelch the BDS movement which is kindling Palestinian aspirations through its effectiveness in shedding light on our denied rights and in showing a nonviolent path to realizing them.

Begun in 2005 by the broadest coalition in Palestinian civil society, BDS calls for ending Israel’s 1967 occupation, ending its institutionalized racial discrimination, which meets the UN definition of apartheid, and upholding the right of Palestinian refugees to return to the homes and lands from which they were uprooted and dispossessed since 1948.

In the last few months alone, a domino effect has unfolded, with large multinationals, such as Veolia and Orange, withdrawing from Israeli projects that violate Palestinian human rights following BDS campaigns against them.

According to a poll released last December by the Brookings Institution, 49% of Democrats would support economic sanctions or more serious action against Israel due to settlement construction. The percentage of millennials who sympathize more with Palestinians has tripled over the last 10 years, and liberal Democrats’ support for Palestinian rights is at 40 percent--the highest in 15 years.

Jewish support for BDS among academics, artists and students has also risen remarkably. A 2014 poll by an Israel lobby group, for instance, reveals that 46% of non-Orthodox Jewish American men support a full boycott of Israel to end its violations of human rights.

What these numbers show us is that the ranks of Americans who are no longer ready to quietly bankroll Israel’s occupation and denial of Palestinian rights are expanding, particularly among those who share with us the principle that all humans are entitled to equal rights, irrespective of their identity.

But BDS alone cannot take full credit for Israel’s growing isolation. Israel’s behavior itself takes a lot of credit for this, as President Obama warned as early as 2013.

The 2015 election of Israel’s “most racist government” ever has inadvertently amplified support for Palestinian rights and for BDS tactics to attain them. Just a few weeks ago, Israel's Chief Rabbi for the Sephardic community called for the ethnic cleansing of "non-Jews" from "the land of Israel."

Leading Israeli political and military figures are deeply concerned about Israel’s descent into this abyss. Ehud Barak, a former prime minister, said Israel has been “infected with the seeds of fascism,” while the deputy chief of staff, Maj. Gen. Yair Golan, has compared “revolting trends” in Israeli society to pre-Holocaust Nazi Germany.

Yet, Israel continues to enjoy impunity, and the US and Europe continue to shield it from accountability, supporting its chilling efforts to bully and intimidate those who campaign and advocate for Palestinian rights through nonviolent BDS tactics.

But BDS as a path to freedom, justice, and equality for Palestinians thrives in people's hearts and minds across the world, as the US Civil Rights movement and the South Africa anti-apartheid struggle did.

I am confident that after Jana Tamimi reads all this, she will realize that we are not alone. She will be even more hopeful, undeterred and beautifully inspiring. The darkest moment is the one that precedes the light.

Omar Barghouti is a Palestinian human rights advocate and co-founder of the Boycott, Divestment and Sanctions (BDS) movement for Palestinian rights.