"The Innocents": A powerful fable of rape and rebirth in a Polish convent

A French feminist hero finds a convent full of secrets in this true-life tale of rape, survival and sisterhood 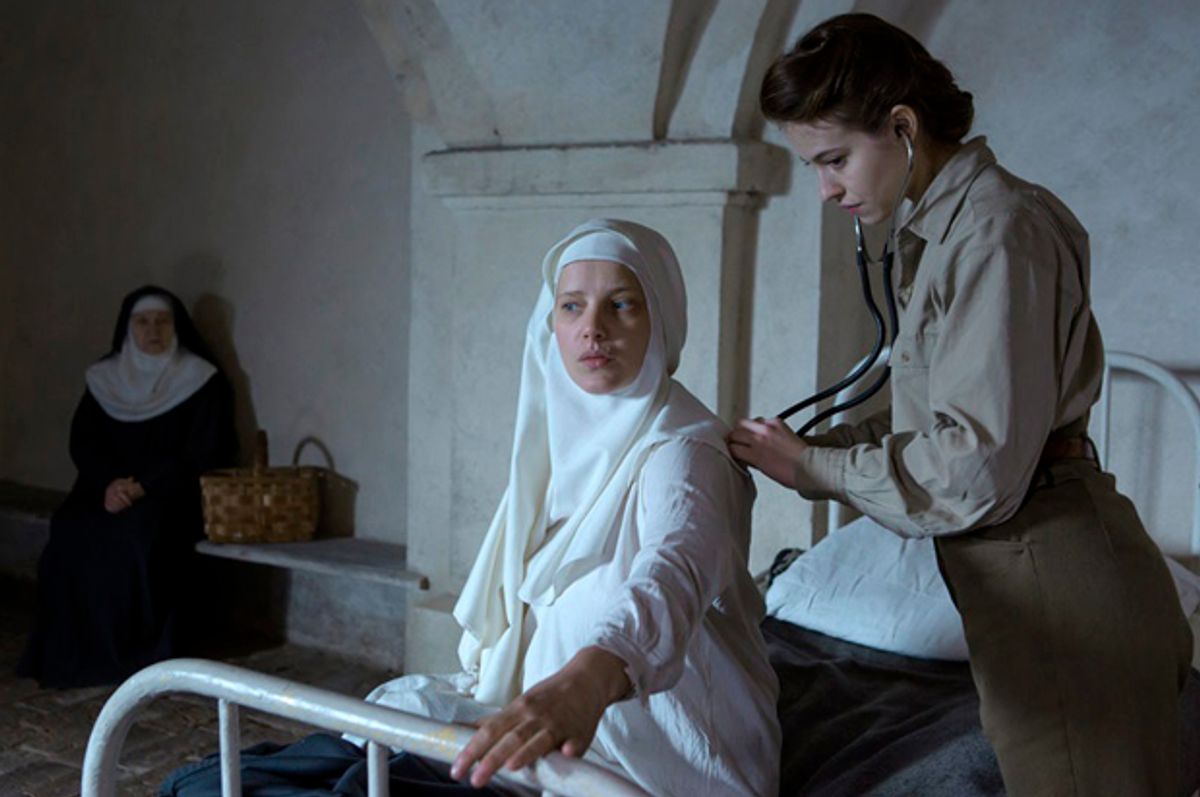 Although it’s based on a remarkable true story from the immediate aftermath of World War II — and a story that is actually true, rather than true-ish or grossly inflated — Anne Fontaine’s quiet and powerful new film "The Innocents” is also a story for our time. Our society is more willing to discuss issues like “rape culture” and sexual assault and the complicated ways women can support each other or betray each other than any known previous society, but none of those things is new. What a brave and ambitious young French doctor discovers in a Polish convent in 1946, where many of the sisters are pregnant, is more than a melodrama of female suffering and solidarity. It’s more like a complex social allegory, delivered in a film of masterful restraint and great compassion.

Fontaine is a highly respected director in France, although her best known work on both sides of the Atlantic is not necessarily her best: “Coco Before Chanel,” the plodding 2009 biopic in which Audrey Tautou was (in my view) miscast as the legendary designer. Formally, “The Innocents” is more in the vein of earlier Fontaine films like “How I Killed My Father” or “Nathalie,” subtly wrought and beautifully rendered character studies that reveal their surprises gradually and never tell the audience what to think.

In the French context, “The Innocents” is also a film about a national hero, played by a rising star. Although the fearless Red Cross doctor portrayed by magnetic young actress Lou de Laâge (who rose to fame in actress-turned-director Mélanie Laurent’s 2014 French hit “Breathe”) is named Mathilde in the film, Gallic viewers will recognize that she is closely modeled on Madeleine Pauliac, a pioneering French doctor and Resistance fighter. Apparently Pauliac, a fervent left-winger with no religious belief, really did provide medical aid at a rural Polish convent where many nuns had been raped by occupying soldiers, and helped the sisters to guard their secret.

Some viewers in search of a parable of feminist liberation may find the constrained universe of “The Innocents” oppressive or claustrophobic, but I would say that if this movie is about anything it’s about the importance of being open to the world as it is, and to the manifold possibilities it already contains. Mathilde and the French Red Cross have come to Poland amid the postwar chaos to deal with urgent humanitarian matters: Emergency medical care and immunizations, rescuing orphaned children, resettling stateless refugees and Holocaust survivors. At first, Mathilde is a little irritated by the Benedictine nun in her old-school habit — a creature of the old Europe, in Mathilde’s eyes — and her mysterious tale of a sister in dire peril.

What follows after Mathilde agrees to visit the convent, where of course she finds a young woman about to give birth, is far more nuanced and intriguing than some formulaic tale of sisterhood across boundaries: the atheist radical and the brides of Christ, united in struggle. Many of the sisters regard Mathilde with intense suspicion at first, and the fearsome Mother Superior (played by Agata Kulesza, the Communist aunt in Pawel Pawlikowski’s Oscar-winning “Ida”), a woman of undoubted faith in the most morbid Catholic tradition, is keeping multiple levels of secrets. What Mathilde has to reckon with is that beneath their robes, the nuns are all individuals who came to this life by different paths, and also that their cloistered retreat is simultaneously a zone of oppression and a place of physical refuge and spiritual nourishment.

As far as what actually happened in the convent, it’s not much of a mystery but neither the characters nor the filmmaker feel the need to discuss it in detail. (Fontaine co-wrote the dialogue with Pascal Bonitzer, from a screenplay by Sabrina B. Karine and Alice Vial.) We know that Red Army soldiers came there three times, and Maria (Agata Buzek), the sister who talks most freely with Mathilde, says she wishes they had killed all the women before leaving. But they didn’t, and in its own way “The Innocents” makes a vibrant case that even the worst kinds of trauma can be overcome by those who remain alive, and open to life. One relentlessly cheerful young sister keeps going under the delusion that the Russian soldier who raped her will now marry her, if only she can find him, but Fontaine doesn’t present this with any hint of mockery. We all need illusions to survive; hers are just a little more obvious than most.

Mathilde, a beautiful young woman who is far too heedless of her personal safety, comes close to being raped or killed herself during a random late-night encounter with some drunken Russian soldiers. (No, that isn’t anti-Soviet propaganda; although the war crimes committed by German soldiers were far worse, there is little doubt that the Red Army raped its way across Eastern Europe and into Berlin.) She calmly tells her Jewish colleague and part-time lover (Vincent Macaigne) that she worked as a stretcher-bearer while the Allies fought their way into Paris, and pissed herself in terror several times. No one in the film ever directly mentions how unusual it is to find a young female doctor in a war zone, and Mathilde never stands before the frozen Polish landscape to deliver a monologue about the rights of women. She doesn’t have to; she has visibly put her life and her body on the line to assert her humanity and her equality.

There is also no moment of redemption and reconciliation in “The Innocents,” as would be required in the Hollywood version. Mathilde doesn’t come to believe in God, and the sisters don’t rip off their robes and follow her to Paris to drink with Sartre and Beauvoir. (Sorry if that’s a spoiler.) But Fontaine and cinematographer Caroline Champetier create many subdued and unexpected moments of simple humanity, or of what a more generous Catholic than the Mother Superior might call grace. There’s a shot late in the film, no more than a few seconds long, when Mathilde enters the vaulted main corridor of the convent and a group of nuns rush to embrace her, that has an almost religious intensity. You could say that in that moment Mathilde understands what the sisters have together, and they understand what she can bring them, or simply that despite the terrible things that have happened, they are glad to be alive and be together.