Trump's big gamble: His trade-bashing just might be the last straw for Republicans 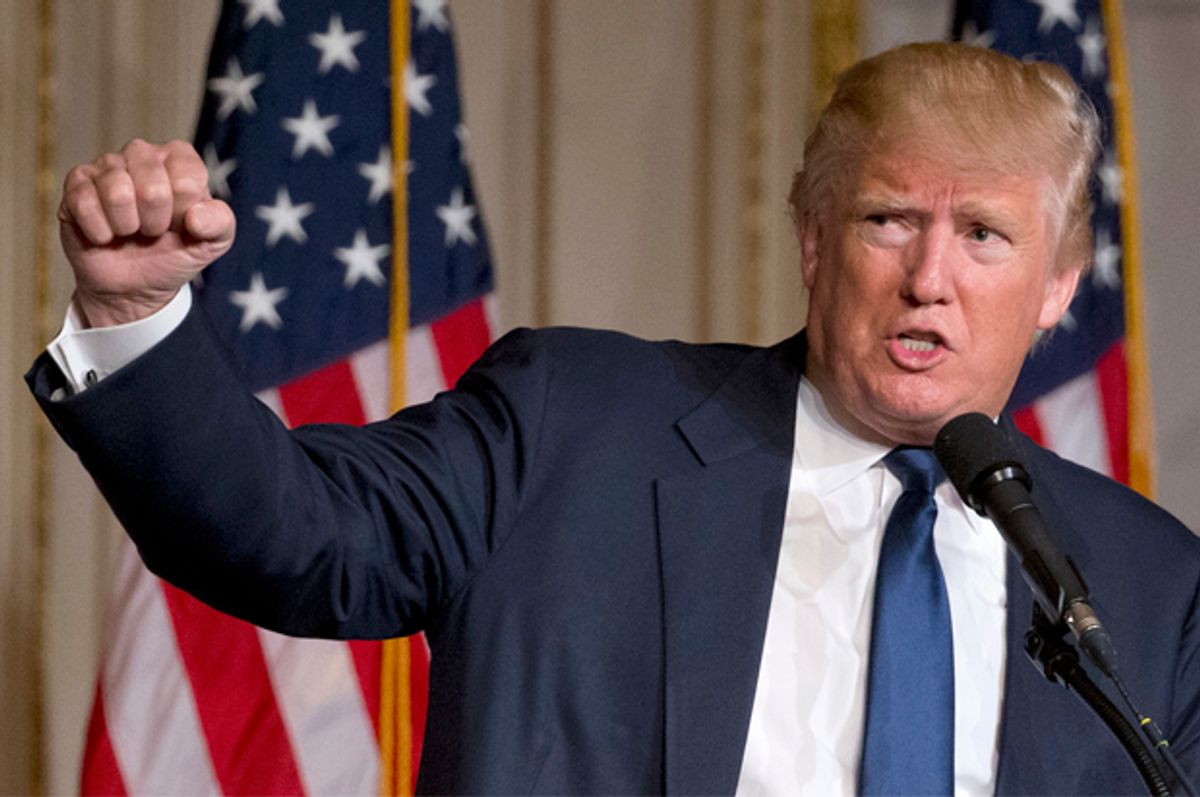 Donald Trump was never going to win over the Republican establishment. He's staked out too many heretical positions to satisfy the elites in his party. But there was always a chance he could pivot just enough to convince them that Hillary Clinton was a worse alternative. That now seems highly unlikely.

Pro-business Republicans will tolerate religious pandering and race-baiting. Indeed, this has been central to their platform for the last thirty years. So long as they can keep trade free and regulations down, they'll happily cater to the worst elements of American politics. This was always a doomed marriage, though. The GOP has thrown red meat to culture warriors for years, promising to make the country less progressive and more prosperous. But they never delivered on those promises. Instead, they've bowed to corporate interests and watched as costs continued to rise and wages remained stagnant. Now the base is angry and Donald Trump is their response.

What makes Trump so dangerous is that he's riding that wave of cultural resentment while eschewing the one sacred cow left in Republican politics: free trade. The Republican nominee has pushed vaguely populist themes since he launched his campaign, but he's now fully committed to an anti-trade agenda.

In a speech this week, Trump broke completely with his party on trade, hammering the Trans-Pacific Partnership, a deal his party universally supports: “The Trans-Pacific Partnership is another disaster done and pushed by special interests who want to rape our country, just a continuing rape of our country. That's what it is, too. It's a harsh word: It's a rape of our country.” Part of the plan here is to woo disillusioned Sanders supporters. “This [the TPP] is done by wealthy people that want to take advantage of us and that want to assign another partnership,” Trump continued. “So Hillary Clinton, not so long ago, said this was the gold standard of trade pacts. The gold standard.”

Trump's remarks echoed another speech he gave earlier this week in which he doubled down on his protectionism. “This wave of globalization has wiped out totally, totally our middle class,” he said at steel plant just south of Pittsburgh. “It doesn't have to be this way. We can turn it around and we can turn it around fast.”

It will be interesting to see what becomes of Trump's populist gamble. On the one hand, he'll alienate Republican elites, particularly the donor class. But he's wagering he's already lost this wing of the party. This is about carving out a new a constituency, comprised of blue-collar Democrats and working class whites who find Trump's ethno-nationalism appealing. This may be Trump's only path to the White House. It's awfully narrow, however. There aren't enough white nationalists in this country to win a general election, and that means Trump has to win with traditionally Democratic voters as well. Clinton is a weak candidate, but Trump is historically toxic.

The trade question is a tricky one for Clinton. She's supported NAFTA and TPP in the past, and although she's backtracked on this front, labor union Democrats remain skeptical. Trump knows it, too. On Monday, he acknowledged Clinton's flip-flop but insisted she'll approve the TPP once elected. “She will do this just as she's betrayed American workers for Wall Street and throughout her career. Her whole career, she has betrayed the American worker. She's trying to put on a good front now. She will betray you again.” There's enough truth here to resonate, but most liberal Democrats won't take the bait. There's nothing behind Trump's bombast. He's a vulgar fascist who has praised globalization in the past and whose economic platform consists of a few platitudinous phrases about America's Amercicanness. Democratic voters will cut through the apocryphal rhetoric.

Ultimately, Trump's trade bashing will hurt him with Republicans more than it helps him with Democrats. The GOP has held free trade sacrosanct for decades. It's the one line you can't cross. Trump's vehement opposition to it will force the party to choose between its candidate and its defining dictum. Republicans lose either way, but they lose less in the long run if they affirm their highest principle.