"Turkey is at war with itself": Experts on the Istanbul bombing and Turkey's policy toward the Islamic State

Early signs indicate that the attack was carried out by ISIS, according to Turkish Prime Minister Binali Yildirim 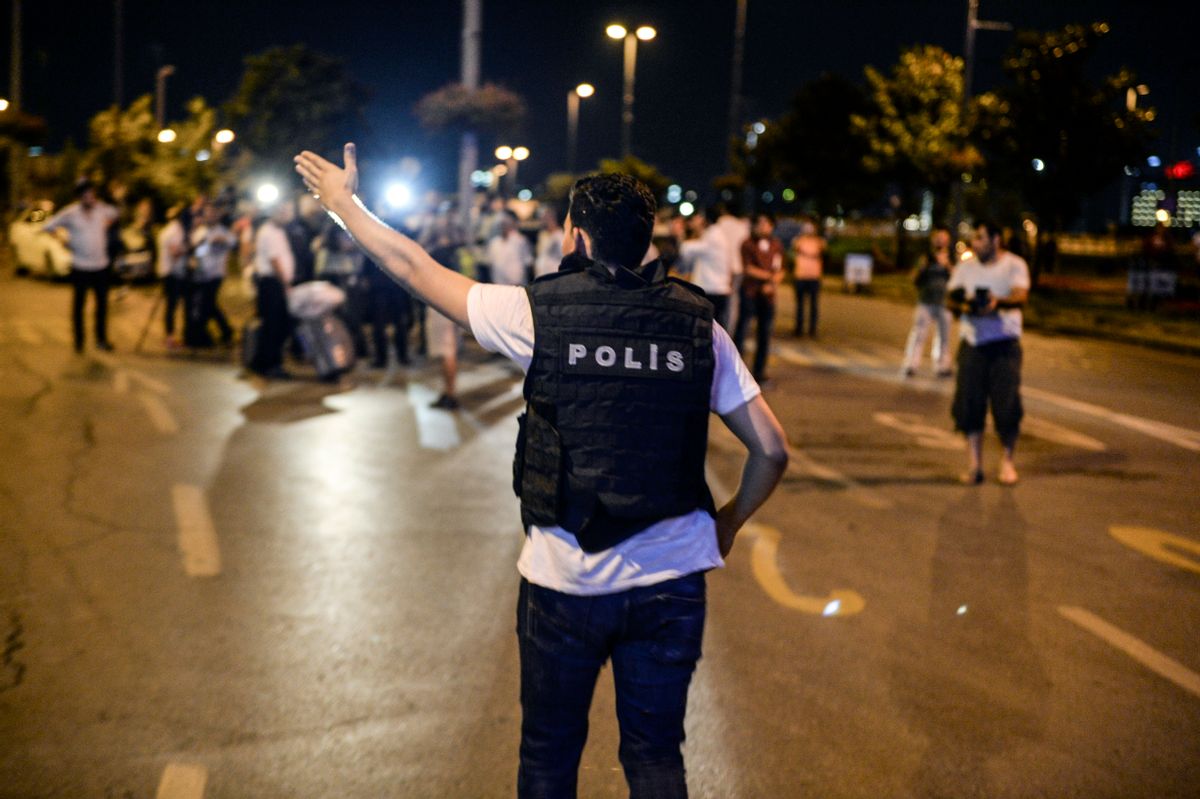 A police officer guides people outside Istanbul's Ataturk airport, Tuesday, June 28, 2016. Two explosions have rocked Istanbul's Ataturk airport, killing several people and wounding others, Turkey's justice minister and another official said Tuesday. A Turkish official says two attackers have blown themselves up at the airport after police fired at them. The official said the attackers detonated the explosives at the entrance of the international terminal before entering the x-ray security check. Turkish authorities have banned distribution of images relating to the Ataturk airport attack within Turkey. (AP Photo) TURKEY OUT (AP)
--

One day after three suicide attackers killed 41 people and injured more than 230 others in a brutal assault on Istanbul's Ataturk airport Tuesday evening, Turkish Prime Minister Binali Yildirim said early signs indicate that the operation was carried out by the Islamic State.

"I hope that the Ataturk Airport attack, especially in Western countries [and] all over the world, will be a milestone for the joint fight against terrorist organizations, a turning point," Turkish President Recep Tayyip Erdoğan said Wednesday.

Tuesday's events in Istanbul are the latest in a series of at least 14 terrorist attacks that have occurred in Turkey over the past year, which have been attributed to ISIS and Kurdish militants.

Salon asked experts on Turkey and the Middle East to explain the conditions that led to the airport bombing and reflect on how the attack might impact regional geopolitics going forward.

Basically, one of the reasons that ISIS was able to grow and get to the stage it has gotten to in Syria is because in the early part of the war, elements of the Turkish government were allowing militants and volunteers and jihadists to enter Syria through the Turkish border. These radicals would travel from Europe and other places and they would travel through Turkey and then they would enter Syria

A little over a year ago, Turkey began to clamp down on the border. Part of it was a response to U.S. and European pressure to stem the flow of fighters to ISIS. And once the Turks began to do that[...] ISIS began to turn against Turkey and target Turkey. So, as far as any change, we've already seen some change from the Turkish government, which is the series of changes that led us to this point.

Soner Cagaptay, director of the Turkish Research Program at The Washington Institute for Near East Policy

Because Turkey has increased border cooperation with the U.S. and because Turkey is fighting the Islamic State through Turkey-backed rebels in Syria, I think ISIS really wanted to up the battle. But this might be a miscalculation on their behalf, because it will align Turkey more closely with the U.S. I think the silver lining of the cloud is that this is going to be the end of U.S.-Turkish discord over whether or not ISIL is a primary threat. It was a primary threat for the U.S. before yesterday. It was considered a secondary threat to Turkey, after [Syrian President Bashar al-] Assad.

Now I think Turkey will prioritize ISIS and focus on that, because Erdogan cannot let this group, which has hit the country’s economic capital, get away with it. He’s a guy who runs on a strong man right-wing presidential image, and he won’t let ISIS get away with an attack which would tarnish that image.

Obviously, the attack is horrible. It's certainly true that Turkey has played a double game in Syria with respect to ISIS, as the Turkish government basically admitted when it tried to suppress the reporting of Turkish journalists about it.

Turkey is certainly not the only country that has played a double game with respect to ISIS — so have the Gulf Sunni monarchies, so has the U.S., in the sense that the CIA is arming groups, as The New York Times has reported, that the President claims with little dispute that he could target under the 2001 AUMF as "associated forces to Al Qaeda."

But Turkey is paying a higher price, obviously, for the double game because it is closer to Syria.

Bulent Aliriza, founding director of the Turkey Project at the Center for Strategic and International Studies

Turkey continues to argue, to a far greater extent than its Western allies, that the reason ISIS is a threat today is because the West did not provide the military means to achieve the common goal of ousting Assad, and eventually the frustration led to increased radicalization among the opposition groups and ultimately to the emergence of ISIS itself.

The Turkish position still remains that ISIS is an outgrowth of the failure to move against Assad, but Turkey’s Western allies have become focused almost entirely of the threat posed by ISIS, while de-emphasizing the need for Assad to leave. In Washington,that’s still stated as the objective, but the means for its realization have not been provided. The Turkish position after this attack, I think, is going to move more in the direction of its Western allies: that ISIS is a threat and maybe more of an immediate threat than the continued survival of Assad.

David L. Phillips, director of the Program on Peace-building and Rights at Columbia University’s Institute for the Study of Human Rights

[Editor's note: The PKK and YPG are secular leftist Kurdish rebel groups that are fighting for independence from Turkey. Turkey sometimes blames attacks on Kurdish rebels that were actually carried out by non-Kurdish Islamist groups.]

It's terrible that so many innocent civilians were killed.

ISIS kills civilians. The PKK targets security services with whom it is at war since Turkey attacked in July 2015.

ISIS resents Turkey for allowing the US to use Incirlik [air force base] for operations. Turkey was the midwife that created ISIS. Now ISIS has turned on its benefactor.

Turkish President Recep Tayyip Erdoğan has been accused of tacitly supporting ISIS in its fight against the Kurds. It's not tacitly. Erdoğan and ISIS are both fighting the YPG and they cooperate.

The YPG is about to connect Azzaz and Jarablus, which would form a security buffer along the Turkey-Syria border. Turkey wants to establish the security buffer but its arch-enemy, the YPG, controls this route.