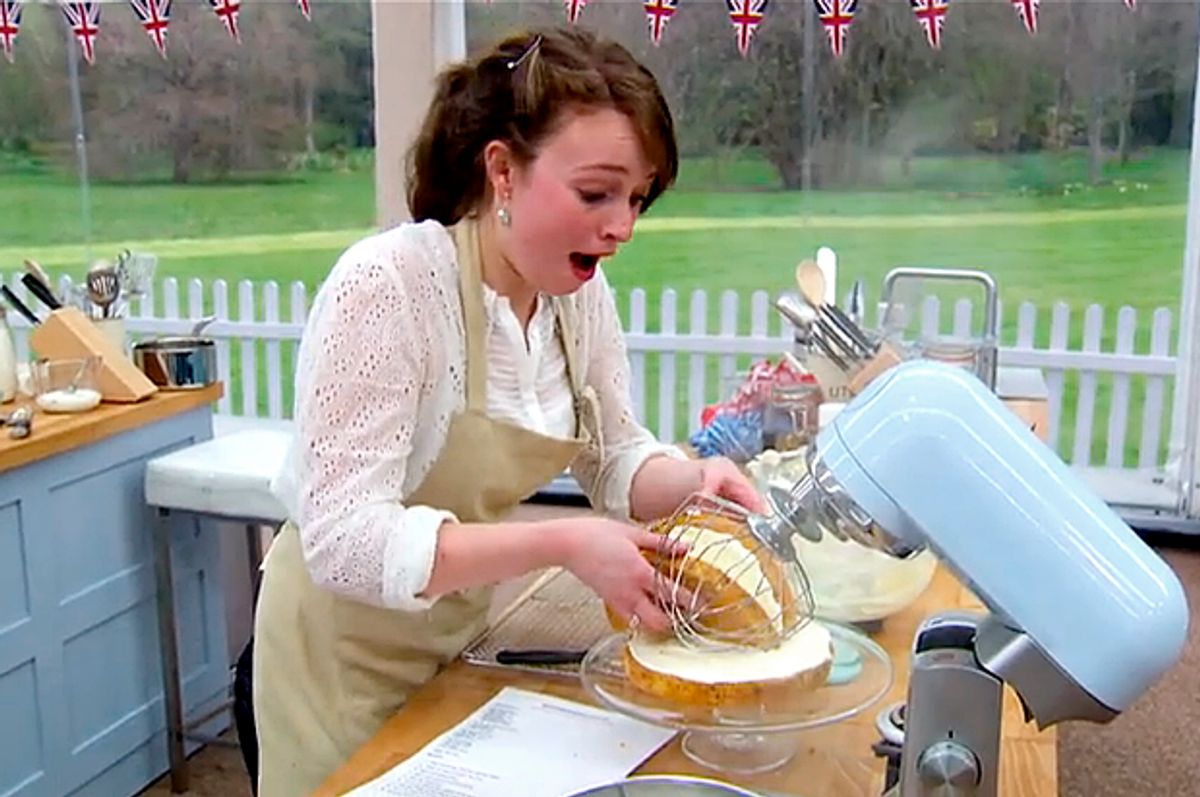 If you’re worrying about the soul of Britain now — ponder how a supposedly civilized country could vote out of xenophobic rage to cut its own throat – this may calm your fears. The United Kingdom may be heading into a nightmare of regret and economic recession, but if you keep your television set to this program instead of the news, all will seem to be well.

With “The Great British Baking Show” (known as “The Great British Bake Off” in its home country) one of the most important parts of the nation’s experience is made available to us: A dozen bakers assemble in a manor, located in a rural part of Berkshire, to all try their hands making the same dessert for two judges, with a host alongside. PBS debuts its third season tonight (this season aired in 2015 in the UK).

Warning: Mild season premiere spoiler ahead (no outcomes revealed). U.S. viewers, stop reading if you want to be completely surprised.

Americans have generally entertained a series of stereotypes about the British, and movies and television that cater to those stereotypes tend to get traction here. For a long time we thought of the Brits as aristocrats; Swinging London and punk associated Britain with rock music and fashion and boundary-pushing. The last few decades have made clear that Britain is also a nation of bankers.

The coverage of Brexit has included views of rural and small-town Britain, much of which has not recovered from the Great Recession, where resentment of immigrants and the nation’s growing multicultural reality absorbs their well-grounded frustration with the economic order.

But what we see in the show is a patch of Britain that doesn’t normally end up in TV or movies or in celebrity culture. “The Great British Baking Show” does not contain any real xenophobia, any serious aristocracy, or much that’s uber-hip. Instead, its contestants tend to be mild, suburban, middle-class.

And why doesn’t it get that much media attention, despite its obsessive fans? It’s fairly dull. There’s not much conflict. The judges are polite as they talk about the ideal “proper” version of the dessert du jour and how the examples do and don’t match up. But somehow this show ends up being tremendously popular over here.

They’re not all likable – there’s something smug about the aptly-named judge, chef Paul Hollywood. But it’s all pretty mild. No one explodes. No one fights back from a sharp insult. The harshest comments involve a contestant's flavors not being well balanced.

The show has none of the swagger of most American cooking shows like “Iron Chef America,” with its quick cutting, macho posturing, surging music, and samurai-inspired knifeplay. (“Are you ready for 60 minutes of culinary conflict?”) There’s none of the S+M-style savagery, the trash-talking, the financial stakes, or the cult of personality of “Hell’s Kitchen.”

The first episode’s opening challenge involves a particularly traditional English cake, dating back hundreds of years, that is often served with tea. Mostly butter, sugar, and eggs, this dessert doesn’t need much. But its simplicity means it can be played straight, or embellished as baker sees fit, and the participants, in their variations, show how a multicultural vision of Britain can co-exist.One woman, an amateur body-builder, hails from Lithuania. A tattooed musician in a trendy hat and nose-ring politely laments his critical reception from the judge. London firefighter Matt puts a particularly English innovative twist on his entry; while Dorret, an Englishwoman of West Indies heritage, makes hers traditional. Nadiya, who wears a hijab, uses an unexpected spice. Other incorporate figs, blood oranges, apricot.

“This is the bit that could go horribly wrong,” Nadiya offers, while executing a tricky portion of her dessert.

The same could be said for Britain itself: Brexit could be a disaster. But on “The Great British Baking Show,” it never does. Anarchy in the UK may lead this show to become even more popular for those who want to remember Britain as it was.