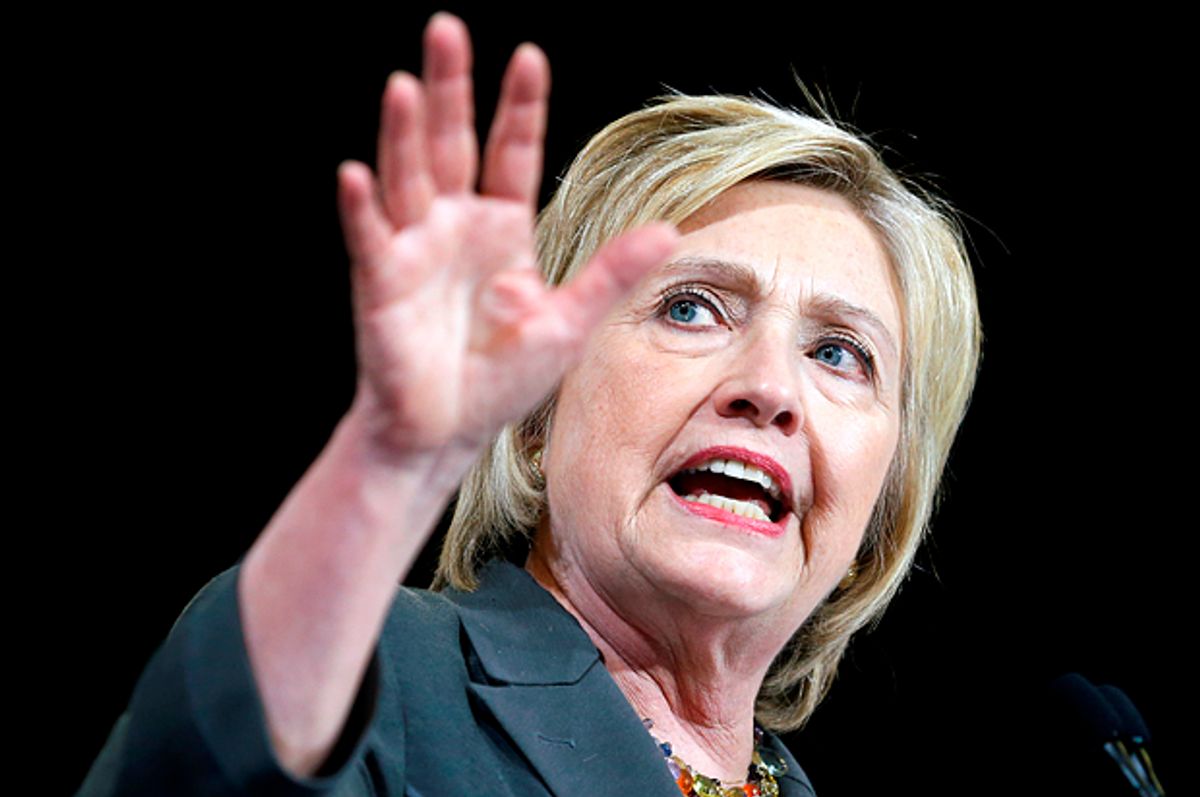 As the election between Hillary Clinton and Donald Trump shapes up, we continue to see Clinton and the women who are supporting her exiled (with apologies to Liz Phair) in Guyville. As presumptive nominee Clinton says about this historic election, "This campaign is about making sure there are no ceilings, no limits on any of us and this is our moment to come together." Yet, we are not all coming together. Bernie Sanders has not withdrawn, despite Clinton’s securing the delegates to win the nomination. Twenty-two percent of Sanders supporters say they’d rather vote for Trump than Clinton. Male Sanders supporters continue to troll and threaten Clinton supporters and the media covering her.

Clinton’s imminent nomination is a huge step for women and for feminism, and feminism is part of a progressive agenda. But you wouldn’t know it in Guyville, where white men continue their long history of failing to fight for feminist advances. Even among those white men who do support Clinton, there is a pronounced lack of enthusiasm and activism. Hillary seems to be left to be elected by everyone but them.

According to NPR, the gender gap could be the largest it has been in any modern election. In what is shaping up to be a “titanic clash of the sexes,” 54 percent of female voters prefer Clinton, while only 35 percent of male voters do. Even male progressives lag, despite that this election is a referendum on a wide agenda of imperative concerns and there is good cause for all progressives to be excited by the prospect of Clinton’s nomination. She is not a perfect candidate. No one is. Writer Brittney Cooper makes the point, “I also don't believe that we can claim to support a progressive agenda if we have not empirically proven that we trust a woman to lead our country or that we will support one.”

Yet we still live in paternalistic, patriarchal Guyville, full of men who will happily mansplain to you about electoral politics and why Hillary is a bad idea. In her piece for Slate, “Men Explain Hillary to Me,” Michelle Goldberg laments that the Sanders campaign has, “…unleashed a minor plague of progressive white men confidently explaining feminism to the rest of us.” She adds, “They seem to believe that their class politics exempt them from taking sexism seriously. They certainly don’t care about female leadership.” In New York Magazine, Rebecca Traister writes, “It’s not just what the progressive guys say about Clinton, her supporters, or feminism itself, it’s also what they don’t say. Where are the fierce male Hillary critics grappling with any anxiety about two centuries of all-male executive power in a country that is 51 percent female and in which women’s bodies are heavily patrolled by federal and state legislation?”

This is not post-feminist America. Millennial men turn out to be just as sexist as the generation of men before them, and men remain on the sidelines of most feminist battles. Twice as many women as men identify as feminists, and feminist women do not demand men join them, even as we dream of a righteous world for our children. Why are we OK with letting our progressive brothers have a pass?

What if we didn’t? What if we said we would not enter into partnerships, have sex with, or socialize with, men who weren’t active feminists? I still believe the greatest weapon of the oppressor is the complacency of the oppressed. Why are we not openly outraged that men seem to be yawning on the sidelines as we work to elect the first woman president?

Clinton, as has been pointed out in countless reports, “…has struggled in many ways to generate enthusiasm and excitement about her candidacy, even though electing a woman to the White House for the first time would be a momentous historical occasion.” This problem comes in large part from a failure of progressive men to embrace and work toward feminist goals. Transformation of the power structure — which we’ve heard a lot about this election year — must include electing a woman president.

This is about the election, but more broadly it is about calling men to be as active in and committed to their feminism as women are. That means: identifying openly as intersectional feminists, voting a feminist agenda, supporting feminist causes, beating back sexism. This is not women’s work. This is everyone’s job.

Eleanor Smeal is hopeful and confident that the gender gap will close. “In this election, more and more progressive men will move in Hillary’s direction in response to the misogyny and extremism of the right-wing and Donald Trump," she says. I hope she’s right.

It’s not that Hillary has a man problem, it’s that feminism has a man problem. John Sides at the Washington Post debunked the myth that there was a huge generational divide between Clinton and Sanders supporters. As Amanda Marcotte wrote for Salon in December, “The Bernie bro phenomenon of young men whose enthusiasm for socialism is goosed by an unacknowledged sexism appears to be a real, measurable phenomenon…the gap between young men and young women does suggest, though I’ll get no end of grief for saying this out loud, that a chunk of Sanders support with his young male cohort comes from guys who really don’t cotton well to the idea of women in power. ... The problem, in other words, isn’t that young women aren’t feminist enough. The problem is that young men aren’t feminist enough.”

The argument that male complacency can be blamed on Clinton being the wrong female candidate does not stand up when you consider that progressive women in every cohort largely support her. These women are not as a group ideologically different than their male counterparts, not intrinsically less liberal, more hawkish, less concerned about her Wall Street ties. So, what is causing that gender divide? Don’t we somehow expect men to be less on board with feminism than women? Isn’t that wrong and misguided of us?

The suffragists, for example, knew that men — the only ones in power — had to come on board with them in order to realize their cause. Likewise the abolitionists and the civil rights activists knew that the white power structure was going to have to join them in their battles. Beyond a moral imperative that should call men to feminism for the sake of justice, don’t feminist women today need men to join us in our struggles? Of course we do.

When we elected President Obama, more than two-thirds of the country saw it as one of the top three advances for African-Americans in the past century. Wouldn’t electing Clinton be, along with suffrage and reproductive choice in the form of birth control and abortion, one of the top three advances for women in the last hundred years? For most of us, this is one of the two biggest — if not the biggest — feminist moments of our lifetime, along with the Roe v. Wade decision to legalize abortion. Overwhelmingly, men were not marching with women then, and they are not fighting for Hillary now, but they should be. What does it even mean to be progressive if you are not fighting for the rights of 51 percent of the population?

Marcotte states it well when she asserts, “plenty of men with otherwise impeccable progressive politics have a special carve-out for women, who they still regard as a secondary class who are here to serve men and not to compete with them…on the scale of feminism, women are way ahead of the curve. It’s time for men to start playing catch-up.”

To be clear, this is not women’s work either, to engage men in feminism. It is up to men to ask themselves why they are not as excited as women are about this moment. Women should not need to have a conversation with them in 2016 about how to get them more excited about equality. Our expectation as feminists should be that to call yourself a progressive you must be intersectional — working to dismantle racism, classism, sexism, homophobia and all forms of bigotry — and to do less than that is to be a bigot. It’s a hard line, yet necessary. We should turn our backs on men who aren’t feminists, because men who aren’t feminists are sexists.

Women should demand more. Half a century of asking men to join us and hoping they will or ignoring them altogether has not seen us achieve our feminist goals. And what we know is that it is only when the oppressor joins the fight does the structure change. We make a mistake to say, “We can’t demand it, we need them to come to this on their own.” In significant numbers, they aren’t, they don’t, they haven’t. Time to shun the men who aren’t feminists. Further, it’s easy enough to say, “feminism isn’t even about men.” Sure. Like anti-racism isn’t about white people?

We must all work to defeat Donald Trump for the good of the country. He is a man of fear and hate and that is what he stirs in his supporters. The country Trump’s acolytes want is not a beautiful one, it is not a righteous country, it is not my country — but if they win it will be the country we have.

This is the election that separates not only progressive values from hate, but feminist men from sexist men. Hillary Clinton stands on one side of that divide. I expect men to cheer her. I expect women to demand they do.

And then, together, we can all watch Donald Trump get beat by a girl.