Move on or make it work: Twiddleston sightings, Bennifer Watch and our fascination with celebrity relationship cycles

Get swept up in the fantasy of Taylor Swift's new romance, or stay painfully down to earth with Affleck and Garner 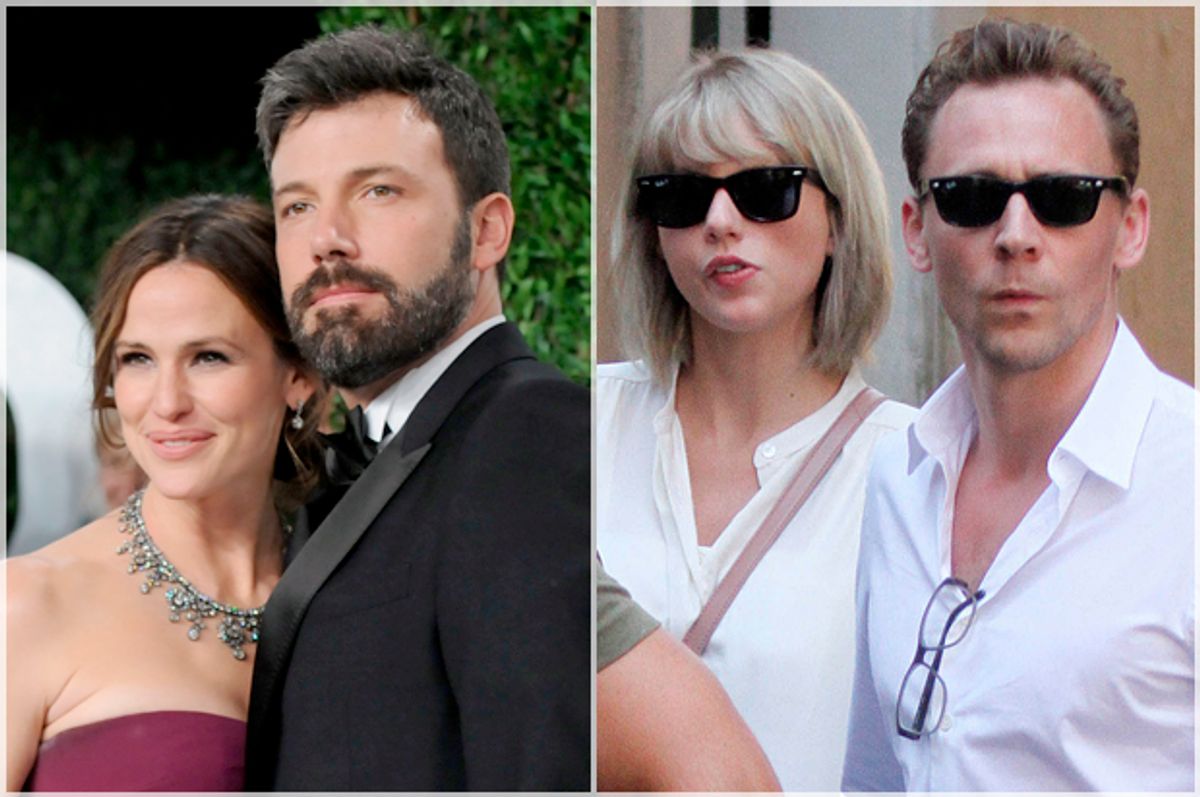 The greatest challenge of moving on from a relationship is actually doing so. Somewhere between managing the shards of a broken heart, maintaining a sense of dignity and warding off looky-loos eager to assess the damage, we’re faced with the decision to abandon ship completely or consider revisiting the relationship in the hope of getting it right the second time around. For some, it’s simply not an option, while others end up trapped in one of those awful on-and-off again cycles that never really go anywhere.

Ruby Rose recently spoke out on Instagram in defense of her friend Taylor Swift, who’s been spotted on holiday with her new man, dapper Tom Hiddleston. In case you missed it, Swift has been criticized for her glamorous rebound following her split with Calvin Harris, and was already notorious for collecting romances the way most women accumulate nail polishes. According to Rose, we shouldn’t shame or judge women who choose to move on with an open heart and love again quickly. Most people understand the headache and vulnerability that even considering getting into a new relationship following a breakup brings on — no rush to go through that again. But there is something to be said about moving on, whether with a new partner or someone familiar.

News began circulating this week that Jennifer Garner and Ben Affleck are holding out on filing for divorce. According to sources, the couple, who announced their separation a year ago, have been living in their family home, spent a month in Europe together, and Affleck still refers to Garner as his wife. Speculation is high that the couple is flirting with the idea of reconciliation— never an easy feat for celebrities, or anyone else for that matter.

Megan Fox and Brian Austin Green are apparently working things out also, which leads to interesting implications regarding the art of moving on. For Garner and Fox, moving on at warp — er Swift — speed isn’t exactly the easiest option, because the respective couples share children and property. With so much invested, walking away completely might not be the most attractive option. No one wants to give up too easily, but pursuing a second chance is anything but simple, despite the familiarity.

For those who opt to work it out, I’m sure the question of whether things will end up in ruins like they threatened to do before lingers in the distance — like gazing off the edge of a cliff — and yet many choose to do so. Inevitably, each partner is going to screw up in a relationship at some point. We have to weigh the option of dismissing the relationship due to human error against forgiveness.

To whirlwind into a new relationship allows one to get caught up in the thrill of romance that also carries the promise of something better than what we’re leaving behind. Taking the long, slow, road of possibly working things out requires more delicate maneuvers. Each partner must evaluate the mistakes of the past, and work like hell to move on from them together, without succumbing to the trap of toxic cyclical relationships.

Watching celebrities make their choices allows us to consider the implications of these decisions from a safe distance. Whether it’s with a new partner or longtime love, all we can wish for anyone to move on is with a clean slate. As long as they don’t rewrite the same story.