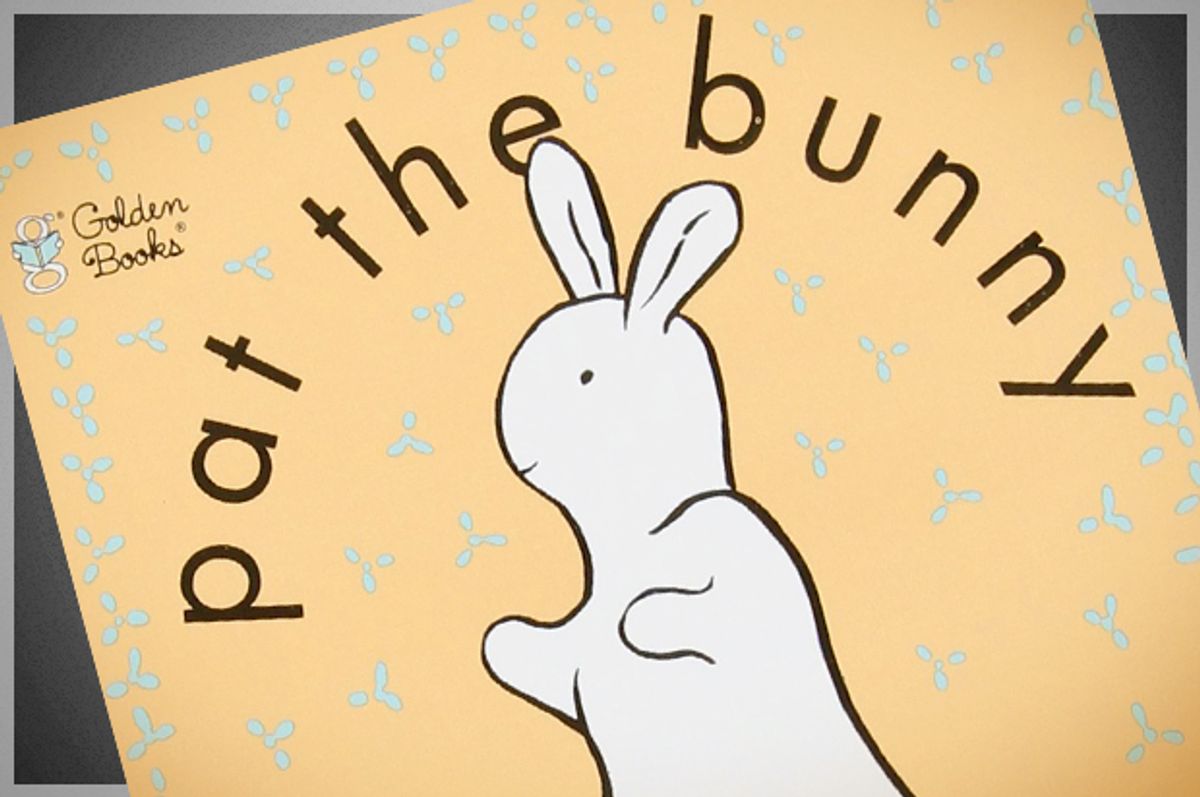 Something happens when you have a baby, and it’s not an event that pediatricians or parenting books prepare you for. At some point during the first six months, you begin to internalize the language and lessons of the books you are reading aloud every day. Unless you have undertaken serious religious study, this is probably the first time you will engage in the ritualistic rereading of a small group of texts. The messages may be designed for kids. But they’ll change you, too.

Take, for instance, a book called "That’s Not My Panda." It takes as its premise the possibility that one could have so many pandas that a process of elimination is required to identify which one is yours. Using criteria not dissimilar to those employed in reality-TV competitions (nose smoothness, back fuzziness), the book arrives finally at the answer: “That’s my panda!” Yet more instructive may be the lesson gleaned from the previous pages — that many of the metaphorical “pandas” you’ll encounter in the board book of life will be, emphatically, not yours. As a mantra it proves surprisingly useful. Confronted with troublesome coworker? A show you don’t like? Not your panda.

It’s an example of how what might seem like a throwaway line can, over time, take on greater meaning. This is not coincidental. Like pop songs, picture books are full of hooks, phrases so insidious that even the simplest can start to seem replete with gnomic intention. Whatever your feelings about Sandra Boynton, it is hard to deny the rhetorical power of her hymn to sleepwear, "Pajama Time." Finally, someone has furnished the English language with a phrase to signify that moment in the day when it’s clear no one will be leaving the house: “It’s pajama time!/ Ooh yes,/ pajama time!”

Equally instructive is Helen Oxenbury and Michael Rosen’s classic picture book, "We’re Going on a Bear Hunt." In it, a family sets out in search of the titular bear, encountering inhospitable terrain and freak weather events along the way. Now, when faced with seemingly insuperable obstacles, I mentally resort to the book’s refrain: “We can’t go over it. / We can’t go under it. / We’ve got to go through it!”

Sometimes the lessons are gentler. In "Pouch," a young kangaroo ventures progressively further from his mother on hopping excursions, though he continues, periodically, to seek out marsupial sanctuary. “Pouch!” he yells, whenever encounters with Australian wildlife prove overwhelming. Who among us has not longed for similar refuge after a long day of adulting?

At other times, however, the takeaways from the toddler library are more dubious. Consider Alice Schertle’s "The Little Blue Truck." In it, the formerly imperious dump truck — humbled after a detour in the mud — experiences an epiphany: “[n]ow I see a lot depends / on a helping hand from a few good friends.” It seems like an unimpeachable exemplum. Yet disturbingly, this “helping hand” only arrives once the little blue truck has leveraged its social capital; until then, the animal corps of truck-pushers stands by, ignoring the dump in its hour of automotive need. In short, there’s a creepy tribalism at work, which puts one in mind less of the golden rule than the ethos on display in Tod Browning’s "Freaks": that we owe our loyalty only to those who qualify as “one of us.”

Then there’s the putatively progressive teaching of Mem Fox’s "Ten Little Fingers and Ten Little Toes." The book starts by advocating for an admirable if ingenuous color-blindness, suggesting that our shared number of digits reflects a common humanity. But this universalism is undercut in the book’s final pages, by the arrival of a baby who is “truly divine, / a sweet little child who is mine, all mine.” So which is it: Are we all the same, or are a few of us actually special snowflakes?

I was surprised to find that some of the darkest messages emerged from a book I remembered fondly: "Pat the Bunny." What I did not recall were the disturbingly Oedipal fantasies that circulate within it. In its brief span, Dorothy Kunhardt’s bestseller asks you to adopt the persona, first, of a little boy, who “puts his finger through Mummy’s ring,” and then, a little girl, stroking her father’s five o’clock shadow.

In case anyone suspects over-reading, it's worth noting that picture books have come in for increased scrutiny in recent years. Yale professor Paul Fry has taught a literary theory class using "Tony the Tow Truck," while a well-known parenting blogger recently published a masterly deconstruction of "Good Night, Moon." (It notes, among other things, the oddness of having a “black office telephone” beside the little rabbit’s bedside: “Who’s calling, his financial adviser?”) Providing further ballast: a 2012 study entitled, "Have a Carrot: Hidden Messages in Margaret Wise Brown’s Runaway Bunny Trilogy and Other Popular Picture Books." On the popular front, Adam Mansbach’s "Go the F*ck to Sleep," while appearing to provide a light-hearted outlet for parental frustration, also parodies the soporific trajectory of practically every story written for kids under five: something exciting happens, it ends, and then everyone has to go, you know, to sleep.

What seems less recognized, however, is that picture books are not only efficient conveyers of ideologies, but that many have been shaped by publishers eager to ensure the ideas they deliver are “correct.” Eric Carle, for instance, has complained that he was pressured to add the penitent coda to his hungry caterpillar’s week-long binge: on Sunday, “he ate through one nice green leaf and after that he felt much better.” As Carle explained to "The Paris Review," “[i]ncluding the punitive stomachache ruined the effect. It compromised the book… I see children doing what they like, which is eating, and doing it without the shame or remorse later drilled into them by Judeo-Christian ethics.” Similarly, when "Goodnight Moon" author Margaret Wise Brown was asked by her publishers to change the ending of "The Runaway Bunny," she responded with the following punch line: “Have a carrot.”

This brief survey excludes books with far more obviously objectionable content: "Little Black Sambo," say, or "The Five Chinese Brothers." Just this January, author Malcolm Jones wrote an article detailing the “unbelievably racist world of classic children’s literature” — a tradition for which the publishing industry, he points out, has worked strenuously to atone. Yet even the most “achingly forward thinking and politically correct books,” to borrow Jones’s phrase, can harbor ideas we don’t want to endorse. Didacticism doesn’t guarantee the lesson being taught is right. It’s nice to learn something from picture books. But we shouldn’t have to.

Elizabeth Alsop is the Mellon Humanities Scholar at the CUNY Graduate Center. Her writing has previously appeared in The Atlantic, The LA Review of Books, Bookforum, and The New York Times Magazine, among other places.