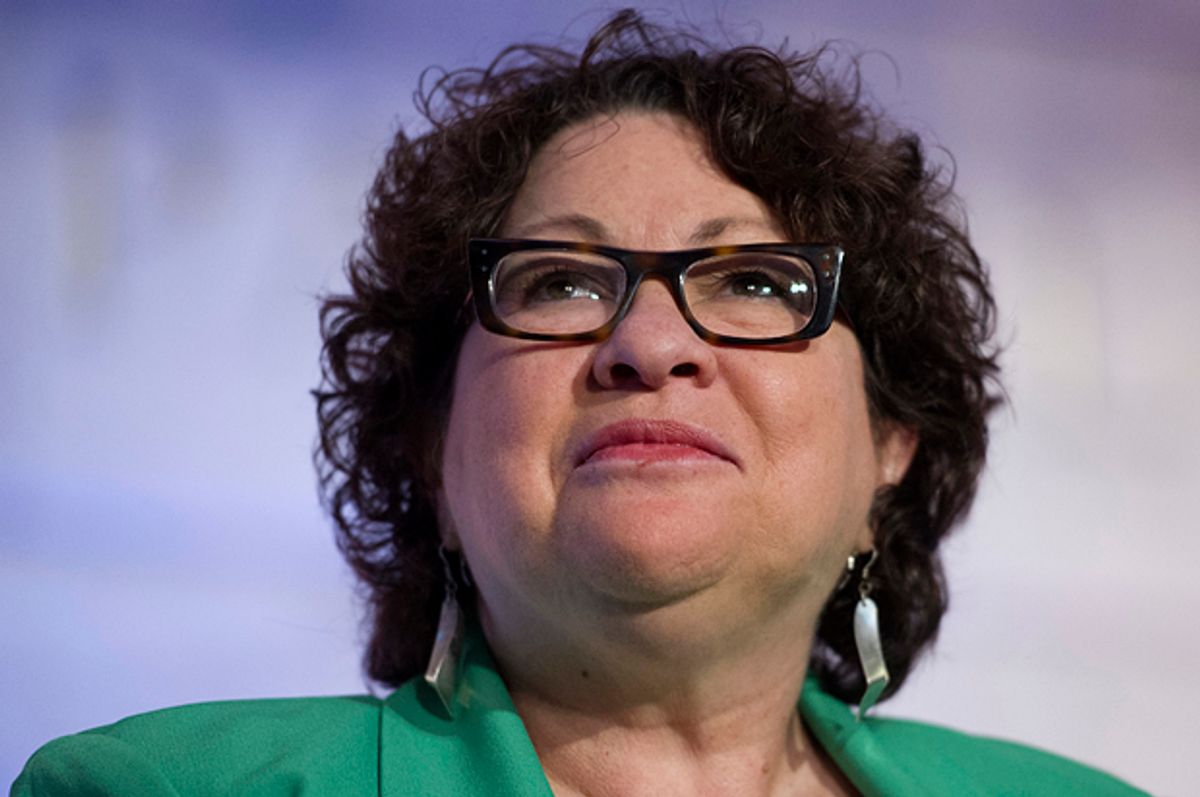 Obviously, Justice Sonia Sotomayor is not an apologist for domestic violence. Yet the liberal firebrand joined parts of archconservative Clarence Thomas’s otherwise lonely dissent in Voisine v. United States, in which six justices voted to uphold the government’s interpretation of a federal law barring those convicted of misdemeanor domestic violence offenses from possessing guns.

That Sotomayor did so is remarkable, something that got lost amid Monday’s crush of attention over the Supreme Court striking down Texas abortion restrictions and Virginia Gov. Bob McDonnell’s corruption conviction. The vote reflects a consistent criticism of overcriminalization, excessive prosecution and abusive policing that has made her the court’s most outspoken critic of the carceral state. This wariness extends even into the fraught area of domestic violence, where liberals, understandably but often calamitously, line up on law enforcement’s side.

“Thomas’s worry has to do with federalism and the encroachment of the federal government into state law matters,” writes Noah Feldman at Bloomberg. “Sotomayor’s concern is more with the status of the individual defendant, who may be subject to long federal sentences.”

As Mark Joseph Stern noted at Slate, Sotomayor has for similar reasons teamed up with conservatives in other cases, including one opposing an expansive reading of federal law that made it easier to classify immigrant offenders as “deportable.”

The Voisine ruling at first seems commonsensical: few have much problem barring domestic abusers from owning guns. That includes conservative Justices Roberts and Alito, and maybe even the NRA. The gun rights juggernaut has not made clear a statement on the case as far as I’m aware, and has not responded to a request for comment.

Voisine involved two men convicted of illegal gun possession in federal court because of prior convictions under a Maine law against “intentionally, knowingly or recklessly causes bodily injury or offensive physical contact to another person.” Aside from the portion of Thomas’ dissent raising Second Amendment concerns, which Sotomayor certainly did not join, the opinions are dry stuff: statutory interpretation involving in-depth exegesis of dictionary definitions of the word “use.”

But the portions that Sotomayor did join argued that federal prosecutors were applying statutes like Maine’s too broadly because they cover the reckless use of force. That could include, Thomas wrote, a father getting into a car crash while texting, injuring his child.

Domestic violence is one area where tough-on-crime conservatives often win liberal support. But critics of mass incarceration and defense lawyers take a more skeptical view of prosecutorial power and harsh sentences regardless of the alleged crime at hand. Many feminists see violence against women as underreported and insufficiently punished, as recent high-profile controversies remind. This is no doubt a reality. But governments that spend so much to incarcerate do little to prevent violence or empower women to escape it. The outrageous cases that go viral online may obscure the bigger picture, where lengthy sentences across the board have tipped the scales in prosecutors’ favor and helped make the United States the most incarcerated nation on earth.

People convicted of sex offenses, caught up in a growing scarlet-lettered dragnet that includes consensual statutory “rape” and sexting between teens,  make up the most rapidly growing portion of the prison population. Domestic violence, like sexual assault, are horrible. And in Voisine, the majority was no doubt concerned that an adverse ruling could free those convicted of misdemeanor domestic violence across the country offenses nationwide from the firearm ban. But contrary to the naïve idea that the carceral state is a gulag comprised of pot smokers, prisons are in significant part full of people who do bad things — or who at least were convicted under laws designed to catch people who do. Effectively confronting excessive prosecution and sentencing requires a hard look at ugly offense categories.

“Many people tend to see any crime with a domestic violence label as particularly serious and deserving of severe punishment,” emails Amy Baron-Evans, National Sentencing Resource Counsel at Federal Public and Community Defenders. “But unlike charges for non-domestic crimes, which usually originate with the police, domestic violence charges are particularly amenable to abuse in emotionally-charged situations. For example, an out-of-control teenager calls 911 when her father won’t allow her to go out, claiming he hit her. Or, a woman who believes her partner cheated on her hits him with a heavy object, he takes it away from her, she calls 911 saying he hit her, and he is arrested.”

The legal question at hand in Voisine is what counts as a predicate offense, which in cases like this refers to state offenses that can trigger violation of a federal law. The government argued for an expansive definition of what sort of misdemeanor domestic violence offenses qualify. Thomas and Sotomayor contended that the matter should be narrowly construed because “reckless” incidents fall outside of the domestic abusers who Congress sought to bar from possessing guns.

Brandon L. Garrett, a professor at University of Virginia School of Law, thinks that the majority got the statutory interpretation right but that Sotomayor had laudable motivations.

“It is certainly evidence of broad liberal and conservative agreement that criminal punishments and collateral consequences reach too far,” emails Garrett. “I do not find their reading of this federal statute convincing. But the McDonnell decision, a unanimous one, reflects a shared view that federal crimes should be read narrowly, even entire groups of crimes should be read narrowly. What is different is that justices like Sotomayor also care about criminal procedure rights of the accused, while justices like Thomas think that it is enough to read statutes narrowly. Both are important and we would see much more progress in criminal justice if Justice Thomas joined opinions by Justice Sotomayor!”

The concerns likely animating Sotomayor’s dissenting vote might not bother those who don’t want anyone, much less domestic abusers, to have guns. Similarly, many liberals weren’t bothered by Democrats’ clamor to bar those on terror watch lists, criticized by civil libertarians for their Orwellian lack of due process, from possessing guns. The carceral and national security states, however, are built in part on noble intentions. In the case of the federal firearm ban, three prior “violent felonies” or “serious drug offenses,” often broadly construed, could trigger a 15-year mandatory minimum sentence.

Sotomayor appears to believe that legitimating federal prosecutors’ practice of broadly interpreting state law to suit their interests is bad for civil rights and civil liberties across the board. In an echo of Voisine, the high court has ruled against allowing prosecutors to broadly construe what counts as predicate offenses in other cases, finding that small marijuana crimes can’t strip lawfully-present immigrants of their right to fight deportation and that prosecutors could not use an overly broad definition of violent crime to trigger harsh mandatory minimums for gun offenses.

Unlike Sotomayor’s recent Black Lives Matter-channeling blockbuster dissent in Utah v. Strieff, Voisine is flying under the radar. It shouldn’t. Sotomayor, unlike other justices, has experience at the ground-level of American criminal justice, having worked as an assistant district attorney in Manhattan. While many civil rights advocates complain about the dearth of defense attorneys on the federal bench, Sotomayor’s time prosecuting everyday criminal matters no doubt taught her a few things about everyday criminal law. Poor people, disproportionately people of color, are the ones who most often face the consequences of tough on crime laws—whether those laws be championed by conservatives, by liberals, or by both. Sotomayor joining Thomas in dissent, however odd it may seem, shows that she knows this well.