They're perfect for him: Newt and Christie's scandalous past make them ideal Trump VP's

Nothing to lose: Gingrich and Christie make the most sense because they've already bottomed out as politicians 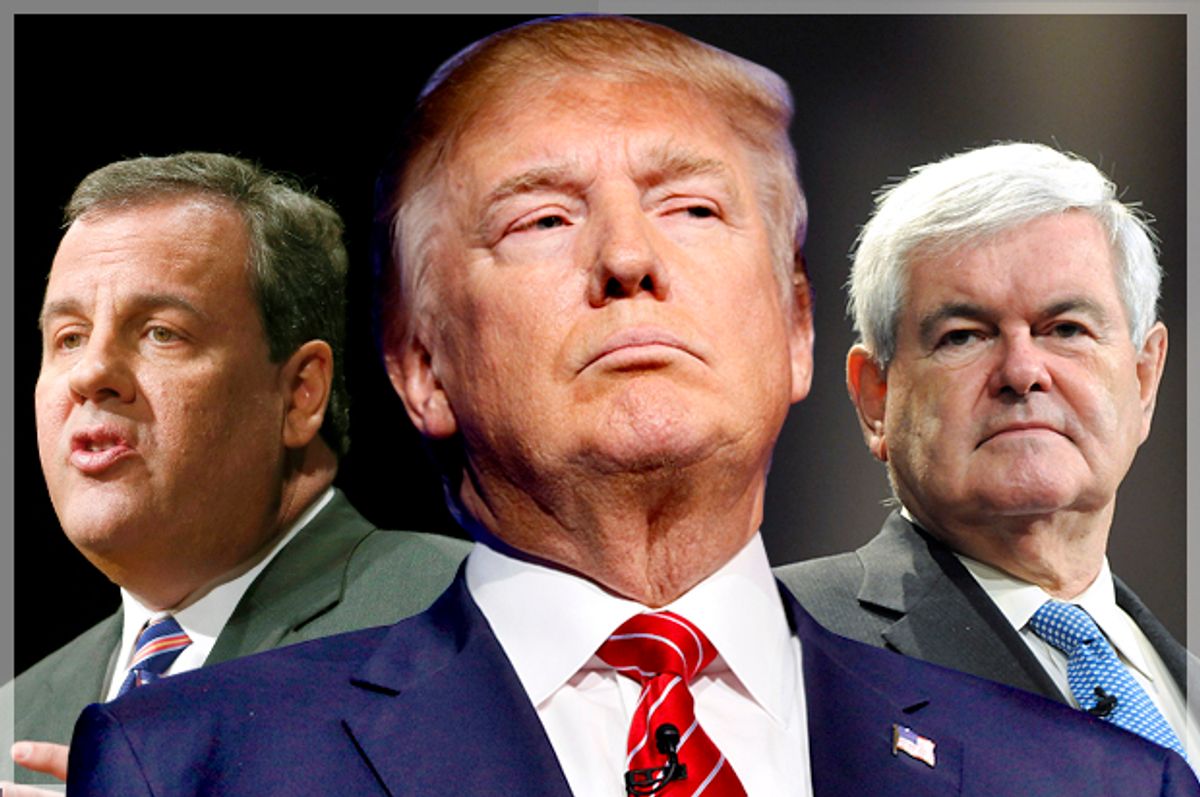 Perhaps the most interesting aspect of the Republican convention this year is the mystery surrounding the VP nomination. Republicans are reluctantly supporting Trump, but they know he's radioactive and don't want to be anywhere near him if possible. We know this because the list of Republicans either not attending the convention or refusing a speaking slot is long and growing. There's also the fact that Trump's campaign is a dumpster fire, with no campaign infrastructure, no material plan for the general election, no fundraising operation, and a barely competent skeletal staff in key battleground states.

So it makes sense that Trump's options for VP are narrower than we've come to expect.

Nevertheless, the Donald's vetting process is underway and Chris Christie and Newt Gingrich are the early leaders, according to a report in The Washington Post. The authors write that “with little more than two weeks before the start of the Republican National Convention, Gingrich and Christie have been asked to submit documents and are being cast as favorites for the post inside the campaign.” Trump confidants like Ben Carson, they add, are particularly enthralled by Gingrich, whose gaseous but silver-tongued style might help the ticket.

Trump has said he wants a seasoned running mate, someone who can work with the establishment. In a normal year, that would open the field to a number of veteran Republicans, safe picks who would add gravitas to the campaign. But this isn't a normal year, and no politician with dignity or something to lose wants to run alongside Donald Trump.

That leaves us with Gingrich and Christie.

Gingrich is a good fit for Trump. He's as shameless as the Republican nominee but considerably sharper. Gingrich has a gift for sounding smart without actually saying anything intelligent. He discovered in the 1990s that if you stick the words “profound” and “fundamentally” in a sentence, people assume you said something important. While he hasn't served in office since 1999, he's still active and clearly itching to be relevant again. Trump is the perfect vehicle.

Remember also that Trump wants to make the campaign ugly. We'll hear more about Bill Clinton's penis than we will about foreign policy or interest rates. As Robert Costa and Karen Tumulty note, Gingrich brings “with him a history of battling with presumptive Democratic nominee Hillary Clinton, going back to their public fights over health care and Bill Clinton's agenda and ultimate impeachment in the 1990s.” In other words, he's an experienced mudslinger.

There are risks involved with a Gingrich nomination, however. He brings a lot of baggage to the table. Even by Washington standards, he's character-challenged. Recall that Gingrich was the chief moralizer during Monica-gate despite being a notorious philanderer himself. He's a thrice-married hypocrite who cheated on his wife when she had cancer and then attributed his misbehavior to his love of America. “There's no question at times of my life,” he famously said, “partially driven by how passionately I felt about this country, that I worked far too hard and things happened in my life that were not appropriate.” It's hard to top that excuse in terms of raw shamelessness. And of course Gingrich's congressional career ended with a string of 84 ethics complaints that, as Mother Jones reported, “culminated in a $300,000 sanction.”

It's a similar story with Christie. Although he balances out the ticket in some respects, he's every bit as scandal-plagued as Gingrich. Most obviously, there's bridgegate, a shockingly sordid story in a state known for shockingly sordid stories. But there are also reports that Christie has abused taxpayer-subsidized expense accounts, used Hurricane Sandy relief money for political purposes, purposefully misallocated Port Authority funds, and privatized the state's public pension system in order to benefit corporate backers of his campaigns. New Jerseyans have rewarded Christie's improprieties with record low approval numbers. Since May, he's hovering around 26 percent. Most of his constituents would probably prefer he become vice president simply to be rid of him.

Ultimately, Gingrich and Christie make the most sense because they've already bottomed out as politicians. That means they have very little to lose by joining forces with Trump. Gingrich is 73 and well past his political prime. He's already disgraced himself in office and won't have another chance to run for national office. Christie is a pariah in his home state and lost whatever credibility he had when he bowed the knee for Trump in February. Trump may be embroiled in scandal, but so are Gingrich and Christie. Paired with Trump, either of them would produce a synergy of controversy, and that appears to be the one thing Trump thrives on.