The system really is rigged: Why “winner-take-all” voting is killing our democracy 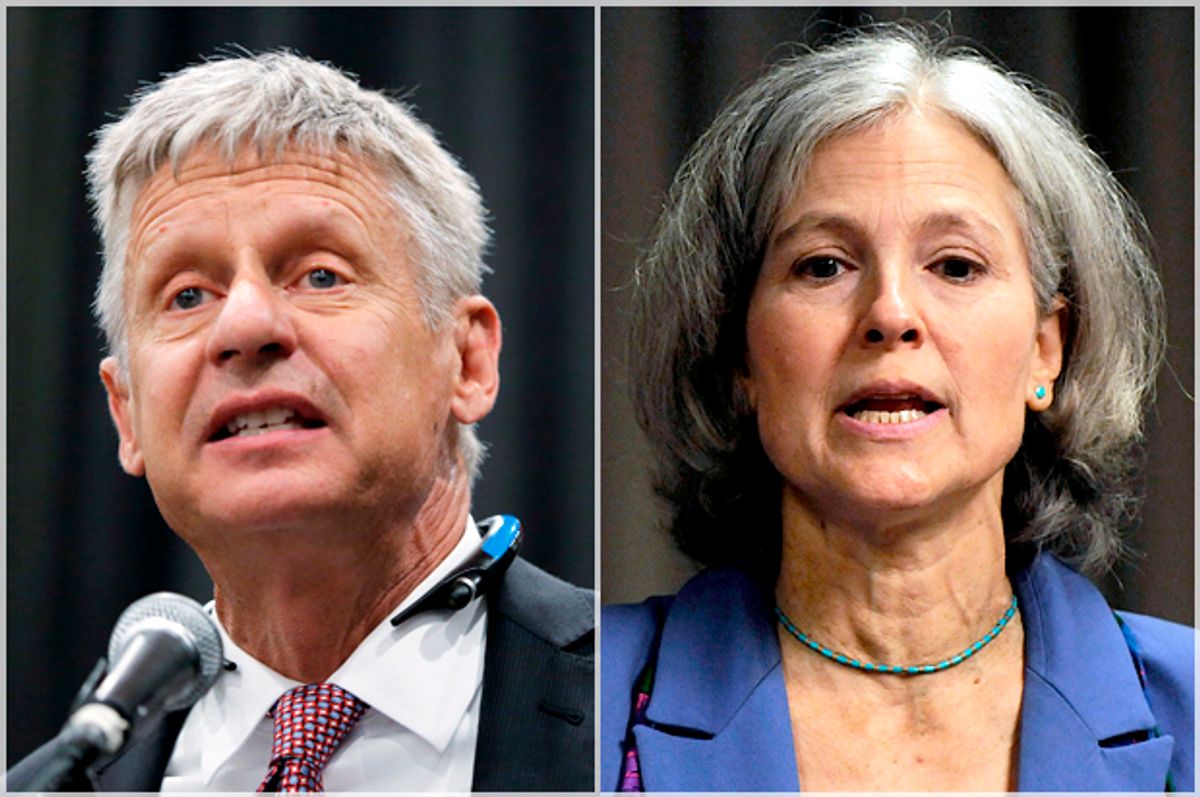 Ever since Hillary Clinton became the “presumptive nominee” for the Democratic Party, Bernie Sanders supporters have been faced with a seemingly impossible dilemma: Vote for someone you hate (Clinton) or vote for someone despicable (Trump). You either cast your vote toward someone you see as a shill for corporate interests or you vote for a bigoted monster. There is a real sense that there simply is no other choice.

If you lean left and you haven’t moved from feeling the Bern to being with “her,” then you have likely been suffering from what I call “vote shaming.” Vote shaming takes place when a Clinton supporter tells you that it will be your fault if Trump wins. Vote shaming, like fat shaming and its ilk, depends on assuming that there is only one way to be—get on board or get bullied. Even Sanders himself seems to have succumbed to vote shaming, having announced he will vote for Clinton in order to help defeat Trump.

But vote shaming seems to have caused unanticipated blowback. As mind boggling as it may be to consider, many Sanders supporters are actually suggesting they will  choose Trump over Clinton. A June 14 Bloomberg Politics national poll of likely voters in November’s election found that just over half of those who favored Sanders — 55 percent — plan to vote for Clinton.

According to Bloomberg, 22 percent of Sanders supporters say they’ll vote for Trump. They quote Laura Armes, a 43-year-old homemaker from Beeville, Texas, who participated in the poll and plans to vote Trump: “I’m a registered Democrat, but I cannot bring myself to vote for another establishment politician like Hillary. I don’t agree with a lot of what Trump says. But he won’t owe anybody. What you see is what you get.”

Stop and ponder how crazy that is for a moment. Frustration with establishment politics is so high that folks will vote for a misogynistic, racist, egomaniacal buffoon over a party insider. Anger over a sense that the primary season was rigged, that Clinton lacks integrity, and that the voting process was unjust has driven supporters of a progressive candidate toward one who has been repeatedly described as fascist. For some Sanders supporters, #NeverHillary can only mean Trump.

That false logic is a clear sign of how our democracy is rigged and our system is flawed: Voters frustrated with the system are planning to cast their votes within the same system.

Armes, like many other Sanders supporters, never considered a third option. It never occurred to her to vote for Green Party candidate Dr. Jill Stein, or Libertarian candidate Gary Johnson. Armes was thinking in the binary two-party logic that forces her to choose between either a Democrat or a Republican.

There is only one way to win an election for president in our country today and that is by being the nominee of one of the two principal parties. The reason for this is that we have “winner-take-all” system. In almost every state, the candidate with the majority of votes wins all of the Electoral College votes. So voting for a third party can really skew the outcome. Even worse, it usually skews it away from your likely second-choice candidate toward the person you fear winning the most.

In fact, as Harry Enten reports for Five Thirty Eight, “Clinton and Trump are both more strongly disliked than any nominee at this point in the past 10 presidential cycles.” So this really is the election between two evils. The only question, thus far, has been which of the two is the worst one.

Dissatisfaction with voting choices, though, may have opened a window for serious debate about an alternative voting system. In an interview with Green Party candidate Jill Stein for Redacted Tonight VIP, Lee Camp asked Stein how voters could justify “wasting” a vote on her. Stein said the answer was simple: change the system from winner take all to ranked choice voting.

As FairVote.org explains, ranked choice voting makes democracy more fair and functional. In ranked choice voting, alternatively known as instant-runoff voting, voters rank their votes. If your first choice does not win, then your vote goes to your second choice, and so on. So, under ranked voting, you could vote Stein first, then Clinton. That would guarantee that a vote for Stein could not actually help Trump. It would also guarantee that we could get a fair and accurate assessment of how many people really picked Clinton or Trump as their first choice. If it seems complicated, check out a sample ballot here.

Ranked choice voting is used in local elections throughout the country. It is also used in national elections in Ireland and New Zealand. It has a history of making elections more open and fair. Even more importantly, it encourages candidates to cultivate a broad, moderate base of support rather than intense, zealous supporters.

Proponents of the system also point out that if we had used it in the 2000 elections, Al Gore would have beaten George H. W. Bush in Florida, since most of the voters who chose Ralph Nader first would have chosen Gore second.

The mere idea that voting for Nader wrecked the election and skewed votes leading to a Bush Jr. presidency should be sign enough that we are due for change. Voters who wanted to support a splinter candidate were punished for exercising their rights. The problem is not just the anti-democratic nature of the Electoral College; it is the way the all-or-nothing system forces a two-party duopoly that can’t be challenged without grave consequences.

The reasons for considering an alternative voting system go beyond a desire to give third parties a chance for greater visibility and more votes. There is much more at stake. First of all, the winner-take-all system increases fear-based voting. Voters are more inclined to vote against a candidate than to vote for someone.

And second, our current system increases partisanship since candidates campaign more on their differences from other candidates than on their actual policies. Research by Pew shows a marked increase in political polarization. This is especially true in Congress, where “partisanship or non-cooperation … has been increasing exponentially for over 60 years with no sign of abating or reversing.”

In contrast, ranked choice voting has been proven to reduce political polarization because candidates are not simply fighting to be #1, they are also hoping to be considered as backup choices, which often means reaching across party lines. When San Francisco implemented it in 2004, observers noticed a direct decrease in hostility among rival candidates.

But the biggest reason to consider an alternative system is the health of our democracy. FairVote.org reports that according to domestic and international experts, “US elections are rated as the worst among all Western democracies.”

From the influence of big money in races to dysfunctional polling places to voters purged from rosters, this election cycle has been plagued by endless allegations of election flaws. As Matthew Cooke points out, when AP called the primary early for Clinton, that was just the frosting on a series of election disasters.

All of this points to an election cycle that offers new opportunities for a third party candidate. Johnson is polling at 10 percent nationally and appears to have about 18 percent of Sanders supporters. Stein, when she is included in polls, seems to be pulling about 5 percent of the vote. It is all very exciting for both Johnson and Stein, who have a chance to increase the visibility of their platforms, but without ranked choice voting those too afraid of Trump or Clinton will still likely vote out of fear.

So, as you ponder the two unappealing choices likely to head the November ballot, consider bucking the closed two-party system and voting a third way, but more importantly consider fighting to change the rigged system that got us into this mess.