Which is stupider: "The Purge: Election Year" or the total insanity of the real world? 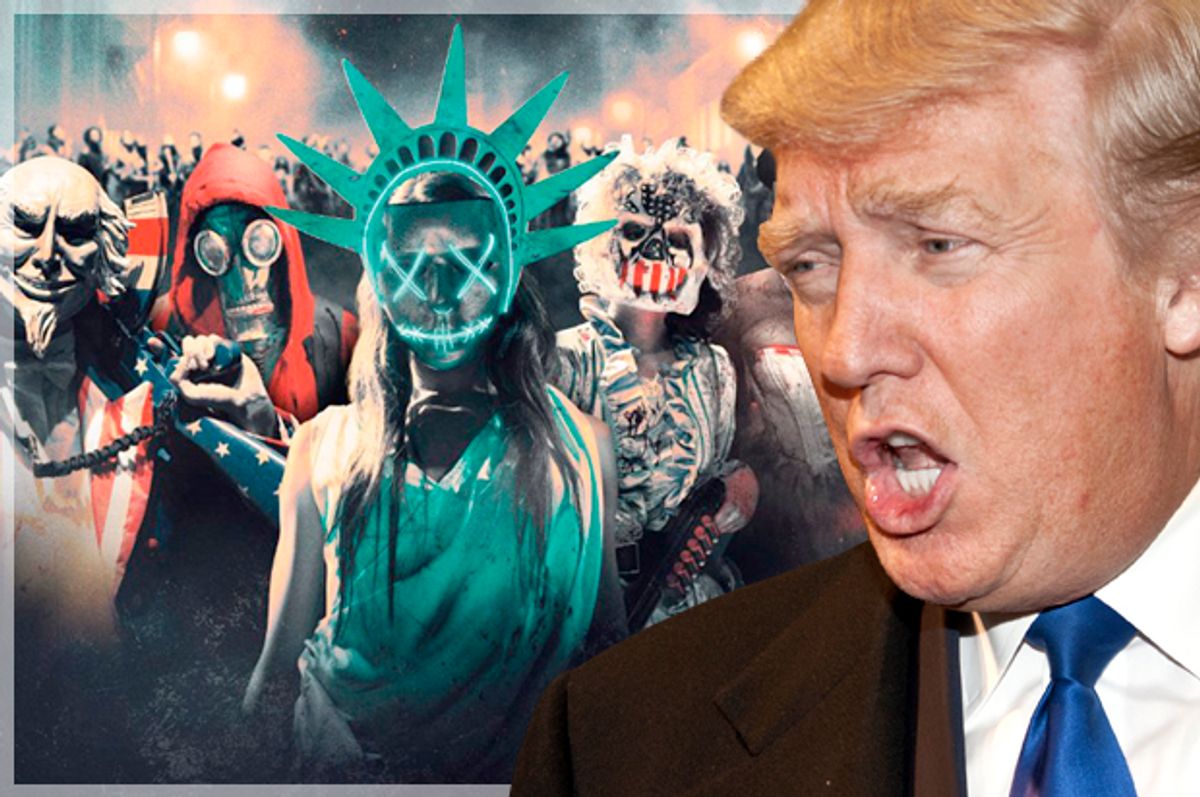 There are two versions of an election year available at the moment, one real and one fictional. One of them is a ludicrous and idiotic narrative about race and class in America, full of unbelievable characters and implausible plot twists, anchored in the naïve belief that popular revolt through the ballot box can bring down a corrupt oligarchy. The other one is a movie.

Yeah, that’s a joke and all — but this entire year has been a massive practical joke inflicted on America and the world by God or the Three Fates or the tumbling dice of the universe. I’m entirely serious when I say that “The Purge: Election Year,” which is both a violent action sequel and a mind-numbingly obvious political allegory, presents a more idealistic vision of democracy than any currently available in the so-called real world of Trump and Brexit and post-partisan meltdown. It’s a story of sacrifice and heroism, a story of redemption and renewal and cross-racial working-class solidarity. It’s a story about the American people finally reclaiming their destiny from the tiny clique of gated-community wealthocrats who run everything. Oh, and it’s also a story about psychotic Catholic schoolgirls with chainsaws and homicidal Russian tourists in Abe Lincoln costumes. I’m not saying that like it’s a bad thing.

It’s not quite accurate to say that the rise of Donald Trump, very shortly after writer-director James DeMonaco began churning out the “Purge” movies (the first one was released in the summer of 2013, and “The Purge: Anarchy” came a year later) is a case of life imitating art. First of all, that assumes that Trump represents “life” and that the “Purge” movies are “art.” No, hold on, because that’s not just a gag line. Close down your computer, drink a glass of cold water, look out the window for a minute and then ask yourself: How sure am I that any of this is really happening? A New York con man with a long history of business failures and bankruptcies, who has a weird comb-over and acid-washed skin, is about to become the Republican presidential nominee? It just doesn’t pass the smell test. Either I fell through a black hole into another universe or I ate those ’shrooms that have been in my best friend’s freezer since 1998 or we have entered a baleful new phase in widespread public confusion between reality and media spectacle.

One possibility we can’t rule out is that “The Purge: Election Year” and other things we perceive as fiction are actually reality. Are we like the prisoners in Plato’s cave, only able to see the shadows cast by people and things in the real world, but unable to see it directly? Neil deGrasse Tyson recently hosted a debate at the American Museum of Natural History on the proposition that our universe is actually a computer simulation designed by a vastly more intelligent species. Some scientists are willing to treat that idea seriously, largely because there is no way to disprove it but also because (like belief in divine creation) it explains away any number of real or possible anomalies. I kind of like that idea and kind of don’t, but if the alien engineers changed the parameters of the simulation to make Trump possible, then they are some cruel bastards.

Another way of putting it that avoids pinning the blame on “Matrix”-like overlords is that the computer simulation is one we created ourselves. As the English science fiction prophet J.G. Ballard once put it, the alien planet is Earth. We have turned the incomprehensible and endlessly complicated real world into a construct we can understand, like a cable drama or an offshoot of the Marvel universe. We have moved through progressive states of dissociation until we now relate to the real world as if it were not real, and as if we were not real either. It has been said that Trump resembles a Marvel supervillain (well, said by me, anyway), but he’s really more like a parody-president from a 1986 underground comic, or from Mike Judge’s “Idiocracy.” (Trump’s blustery goofus demeanor, where you’re never sure whether he’s really mad about something or just winding you up, would make him a great host for “Ow! My Balls!”)

We may have buyer’s remorse at the belated realization that the world is not just TV and the Internet and that our actions have consequences: In one recent survey, a majority of Republican voters said they wished someone other than Trump were the nominee. Barely a week after the Brexit referendum, 7 percent of those who voted “Leave” told pollsters they regretted their decision, which would have been more than enough to alter the outcome had they voted for vaguely grownup reasons instead of voting for “Ow! My Balls!” But any consciousness that the world is not a video game and reality is not a reality show is intermittent at best, and kind of a bummer. It goes away again after a while.

If for some inexplicable reason you missed DeMonaco’s first two “Purge” movies, I guess I just explained the premise. But it deserves some elaboration because all three movies are barely disguised fairytales about contemporary America. They’re about institutional racism and predatory financial practices and how a tiny, oligarchic elite can rule everyone else through the pretense of democracy and the illusion of freedom. This one is even about a sensible blonde lady whose presidential campaign depends on African-American support, although I’m going to guess that part is a hilarious accident.

If you do the math, “The Purge: Election Year” is presumably set in the year 2032, but DeMonaco doesn’t even bother to make it look like anybody’s idea of the future. Some years earlier — right now, basically — a bunch of rich white dudes who called themselves the New Founding Fathers staged a coup and replaced the old United States with a neo-fascist state that has ensured full employment and near-zero crime through the annual ritual of the Purge. Every year at the spring equinox (a nice touch!), all forms of crime and mayhem are legal for one night, from 7 p.m. until 7 a.m., and the cops, firefighters and paramedics won’t show up no matter what happens. If you’re about to crack a joke about how that’s every night in Detroit, skip it — we wore those out when the first movie was released in 2013.

There’s no doubt that DeMonaco has milked the sadistic and prurient possibilities of this premise pretty hard in all three installments: The Manhattan preview audience with whom I watched “Election Year” went nuts for the scene when the slutty prom queens get mowed down by a bad-ass black woman in an armor-plated ambulance. But like most “exploitation movies,” the “Purge” franchise is deeply moralistic at heart. Just below the surface, the Purge is a mechanism for culling the surplus population: If a few middle-class families are terrorized by home invasions (as in the first movie), those most likely to fall victim to goons or gangs or “murder tourists” are those too weak to defend themselves: the poorest of the poor, the homeless, the mentally ill, undocumented immigrants and the elderly.

So it’s basically Halloween meets the Holocaust, configured as a way to vent your frustration on whomever you hate — Muslims, Jews, gays, guys who wear Dockers; it’s all good — and ensure a harmonious and prosperous society the rest of the year. It’s about making America great again, pretty much. The only thing Donald Trump wouldn’t like about that idea is that he didn’t think of it first, and the thing DeMonaco must think, looking at the Trump campaign, is that the unctuous theocratic president played in the movie by Kyle Secor (onetime star of “Homicide: Life on the Street”) isn’t nearly as terrifying or as nonsensical as the real thing.

As my movie-reviewing guru Joe Bob Briggs — from whom I learned everything I know, except that I forgot it again — would say at this point, there’s an awful lot of plot in “The Purge: Election Year” cluttering up the story. The idealistic blonde senator running for president on a promise to end the Purge (played by Elizabeth Mitchell of TV’s “Lost” and “Revolution”) lost her family to a Purger lunatic years earlier, and has entrusted her Purge Night safety to former cop Leo Barnes (Frank Grillo), a returning character from “Anarchy.” Also returning is Edwin Hodge as an anti-Purge resistance fighter previously known as “the Stranger,” who now gets a name and a Black Panther-esque paramilitary movement.

Throw in the virtuous black small-business owner played by Mykelti Williamson, his Mexican immigrant sidekick (Joseph Julian Soria) and the aforementioned ambulance-driving, shotgun-wielding female badass (Betty Gabriel) and this whole movie is like a Coalition of the Willing — willing to kick Donald Trump’s ass. Even when you factor in the deranged porn girls and the episodes of pointless and gruesome violence, under normal circumstances I would say that “The Purge: Election Year” is stupider than real-world politics but somehow purer in spirit. Since nothing about this year is normal and nothing could possibly be stupider than the 2016 election, I’ll stick with the premise that this B-minus dystopian action flick portrays a better world, and we can only wish we lived there instead of here.