Behold, Brexit: The greatest political satire of all time 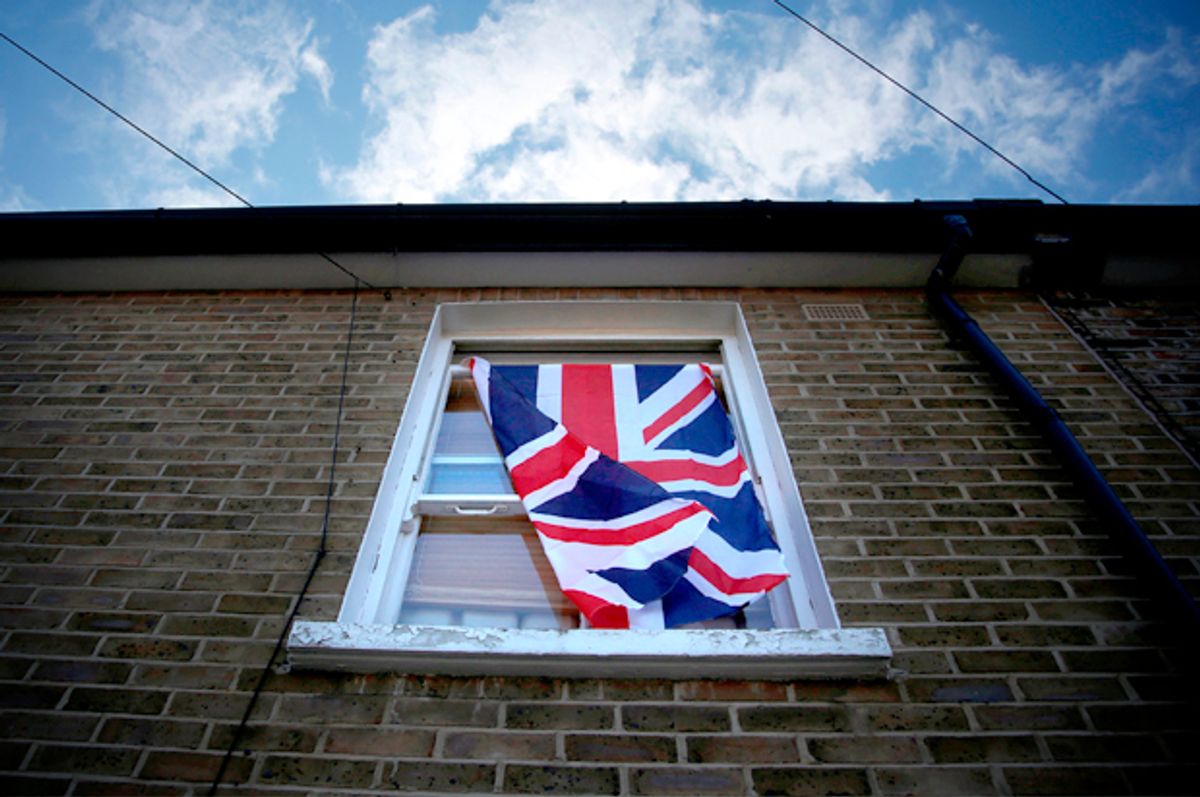 Forget "In the Loop." Forget Michael Ritchie’s "The Candidate," or Kubrick’s "Dr. Strangelove." Brexit is the greatest political satire of all time. A jaw-dropping tale of how a powerful few convinced an angry electorate to shoot itself twice in each foot before asking whether or not that was a good idea, Brexit is the ultimate in political farce. And what’s astounding is that nobody seems to be taking credit for it, even though its satirical conceit is so complete. Just who is responsible for Brexit?

We can look to nicotine-fried hard-right fear goblin Nigel Farage as the man who instigated the EU referendum and got the anti-immigrant vote out with some glorious Nazi-inspired propaganda; to (soon to be ex-) Prime Minister David Cameron, who confidently agreed to the referendum to see off Farage’s Eurosceptic UK Independence Party only because he thought he’d win; and to cuddly yet violent former Mayor of London Boris Johnson, who elected to lead the campaign for Britain to leave the EU only because he thought he’d lose, albeit come close enough to a win that he could challenge Cameron for the PM role (when we Brits gamble, only whole nations will do as the wager).

Then there’s Jeremy Corbyn, the leader of the officially pro-EU Labour Party, who – a long-time Eurosceptic himself – deliberately sabotaged the Remain campaign; and apparent malfunctioning android Michael Gove, the Vote Leave campaigner who assured voters there was no need to listen to the experts who accurately predicted the economic crisis Britain now finds itself in. It was Gove who appeared before the press alongside Boris to claim ‘victory’ last Friday. Far from seeming like they’d just won the Westminster lottery, the pair rather looked like two hostages forced at gunpoint to assure their loved ones that everything was going to be fine. Now we know why, as we hear their campaign never even planned for the eventuality of a Brexit. Truly, this is a gallery of incompetents, caricatures that could only exist in comedy, none of whom will now lay claim to the financial and political firestorm that Brexit has left in its wake.

It’s probably difficult for anyone outside of the UK to understand why British voters would trust ones such as Boris and Gove to tear up a glorified trade agreement decades in the making. You really had to be in Britain prior to the vote to get a feel of the anti-immigrant, anti-fact atmosphere created by the most right-wing press in Europe. The likes of the Sun and the Daily Mail – the UK’s two biggest dailies – led the British media’s pro-Brexit charge, forever encouraging anti-EU sentiment and suggesting a barbarian horde of Europeans was coming to Britain to claim financial handouts and have a go on our National Health Service.

Now, having gotten exactly what they wanted, both papers are finally admitting to readers that Brexit isn’t necessarily going to make things better after all. Although, perhaps it’s this very chaos that many Leave voters really wanted. When he agreed to a referendum, David Cameron didn’t get that the British electorate were so disdainful of the powers-that-be that they were willing to explode a system they didn’t feel was working for them. Brexit is the people's Gunpowder Plot, only this time the perpetrators have succeeded, not just in leaving Parliament in ruins, but in delivering a violent shock to the economy as well.

Not all Leavers are happy with the result. Already, many of those who voted Out are expressing heavy Regrexit, with some admitting they only cast a ballot for Leave in protest. Even those Leavers who felt confident in their decision were soon left wondering what the hell they'd just voted for, as the head Leave campaigners immediately began admitting every one of their key pledges was a lie. Lower immigration? Not really. A radical overhaul of Britain’s relationship with the European Union? Unlikely. More money for the NHS? Nah. By Monday, it seemed that all Leavers had voted for was an economic downturn. The Leave team have now wiped their website of any promises made, hopeful voters are forgetful enough that they don’t now turn to rioting in the streets.

Brexit will no doubt continue to provide apocalyptic entertainment for years to come. Britain’s vote to leave the EU will most likely shrink the nation (goodbye, Scotland! Et tu, Northern Ireland and Wales?), diminish its influence on the world stage and cancel London as a financial centre of the world. With the pound plummeting and $2 trillion in stock value wiped out in a single day, Leave-backing businessmen were regretting their decision from the get-go – like stockbroker Peter Hargreaves, who donated £3.2 million to the Out campaign, only to see his fortune shrunk by 19 percent as a direct result of Brexit by Monday, in what may prove to be one of the poorer investments of the year. More seriously, with many on the far right feeling suddenly legitimised by a vote to flip off Europe, xenophobic and racial abuse in the UK has risen by 57 percent since last Thursday, with US army vets and British-born BBC hosts now being subject to abuse unheard “since the '80s.” In short, though Brexit may look like a glorious mash-up of "House of Cards" and "The Thick of It" from the outside, for those living through it it’s slightly more unsettling.

But, British as we are, it seems – having deliberately driven it into an iceberg – rather than putting a stop to this madness we're electing to just go down with the ship instead. There are perfectly good lifeboats offering us a way off, but it seems our captains won't allow it; it's too late for that, because David Cameron, Boris Johnson and Michael Gove made promises – even if today they are cursing themselves for ever making them (especially Boris, who was just out-Frank Underwooded by Gove and lost his chance of becoming PM). It's an absurd carnival. You still suspect that, one day soon, Johnson is going to take to a stage in full view of the British people and, with financial workers fleeing to the continent behind him, he's going to exclaim: "The Aristocrats!" It would be an apt climax. At least then it will feel like there has been some point to all this.