Girl on girl crimes: “The Neon Demon” makes women look like the real predators in the modeling world 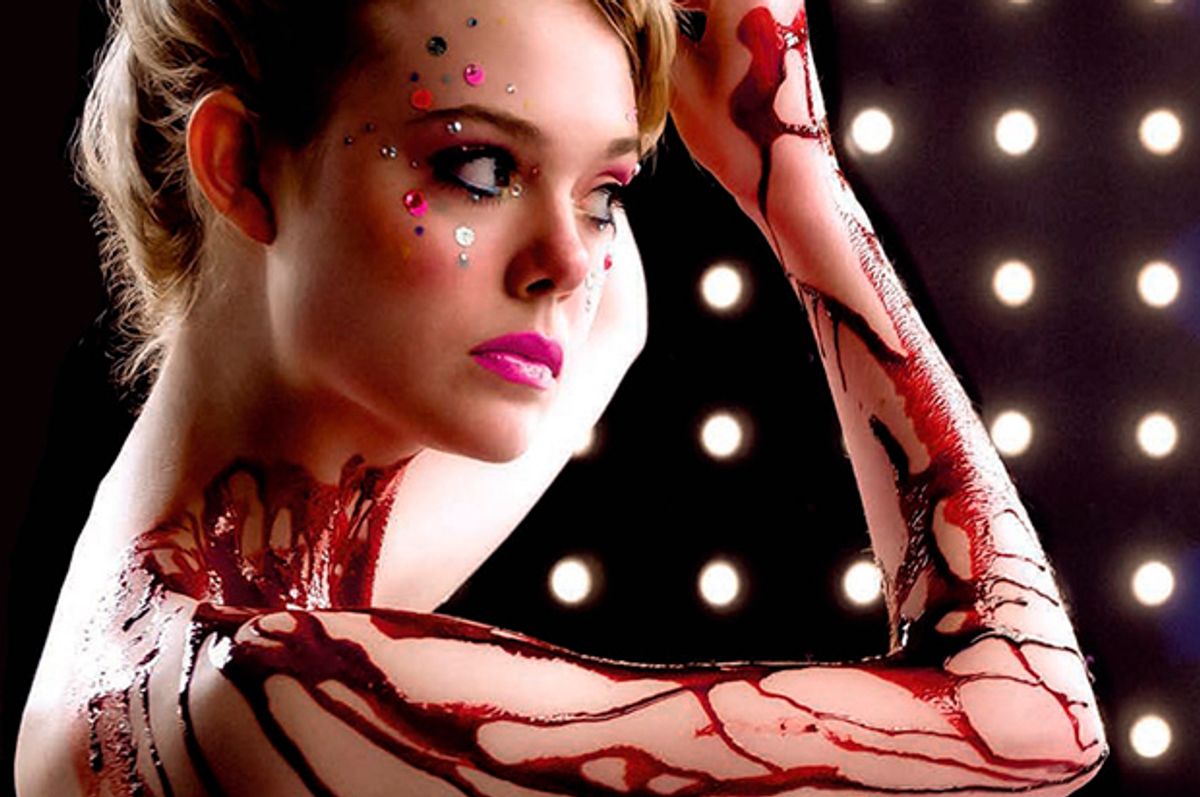 Warning: Some spoilers ahead for "The Neon Demon."

But what’s most surprising is how literal his avant-garde satire, which takes its cues from Aronofsky, DePalma, and Lynch, really is. “The Neon Demon” presents a Los Angeles that eats its young. Jesse (Elle Fanning), a 16-year-old girl straight off the bus from Georgia, is an aspiring model who finds herself the intense object of carnivorous desire. An uncredited Alessandro Nivola plays a male fashion designer who is pointedly bored with the usual suspects at a casting call when he looks up and sees Jesse walking toward him. He’s spellbound by her presence. Guileless and fresh-faced, she exudes that most ineffable of qualities: Jesse has “It.”

As she rises through the ranks of the modeling industry (think more “Black Swan” than “Showgirls”), she is stalked by her competition. Abbey Lee (“Mad Max: Fury Road”) is a standout as Sarah, who worries that she’s aging out of the system; as colleagues remind her, you’re “washed up” as a model after you turn 21. (Lee is 29.) Sarah looks at Jesse like a mountain lion eyeing its prey, and after the up-and-comer lands a gig Sarah badly wanted, she pounces. Sarah slices Jesse’s hand open and begins to drink her blood.

“The Neon Demon,” which Refn co-wrote with playwrights Mary Laws and Polly Stenham, presents a portrait of female competition in a savage industry, in which women feed off each other to stay young. Sarah, who eyes appear perpetually sunken in with hunger, craves what Jesse has to offer: fame, beauty, and desirability, that thing when you walk into a room and you know everyone is looking at you. “It’s the middle of winter and you’re the sun,” says Ruby (Jena Malone), a makeup artist who frequently works with Jesse. Ruby’s overt sexual interest in the young model is treated as more predatory than anything else in the movie.

With “The Neon Demon,” Refn traded his prior portraits of masculine ultraviolence (“Drive,” “Only God Forgives”) for a movie that centers female perspectives. “I always wanted to make a film about the 16-year-old girl inside of me,” Refn has said. To realize that vision, he enlisted Natasha Braier, the gifted cinematographer who worked on David Michôd’s “The Rover.” He also reduces the male roles to afterthoughts. Karl Glusman (“Stonewall”) plays Dean, a mumble-mouthed photographer who quickly is cast aside by Jesse’s career ambitions.

To treat men the way women are historically treated in film—as props and plot devices—is a noble quest. But what reducing the male characters to set dressing does is obscure the very real sexual violence that takes place in the modeling industry, in which men with power and influence can use their positions of authority to manipulate and abuse young women, often underage. In its rush to blame the problems of the fashion world on women, “The Neon Demon” has a way of excusing and ignoring the sexual violence that is an unfortunate staple of an unregulated workplace.

Shortly after arriving in Los Angeles, Jesse poses for Jack (Desmond Harrington), a Terry Richardson-like photographer who has a “reputation.” Ruby warns her to not to be alone with him. Refn sets their shoot with thriller-like tension: After instructing Jesse to remove her clothes, Jack turns out the lights. He approaches her and pulls her neck to the side—the savage Nosferatu ready for a taste. The scene, though, envelops more insidiously and ambiguously than expected. Jack instead covers her entire body with gold paint, slightly off camera.

Curiously, “The Neon Demon” views this encounter as a crisis averted instead of a case of sexual abuse. Because Refn isn’t interested in Jack’s behavior, he doesn’t examine what it means for a wealthy, successful photographer to personally apply paint with his hands to every surface of an underage girl’s body. (For the record, Jesse lies about how old she is, saying she’s 19.) Instead the scene is a bait and switch: It’s Ruby who Jesse needs to steer clear of. Driven by same-sex desires, her coworker attempts to coerce the teen girl into sex. When her plans are thwarted, Ruby unleashes that sexual energy on a corpse at the morgue where she works part-time. The sequence, which must be seen to be believed, is straight out of a David Cronenberg movie.

That obfuscation isn’t just homophobic. It’s an affront to an industry where scenes like the one that transpires between Jack and Jesse occur with absurd regularity. The Model Alliance is a nonprofit founded in 2012 by Sara Ziff, whose goal is to advocate for “fair treatment in the workplace… and establish ethical standards that bring real and lasting change to the fashion industry.” According to the group, 30 percent of models claim to have been touched inappropriately during a photoshoot, while 28 percent say they’ve been “pressured to have sex with someone at work.”

Ziff was inspired to start advocating for industry reform after working with Richardson, the aforementioned photographer whose career has been unharmed despite numerous allegations of sexual harassment on his shoots. Richardson has shot everyone from Lindsay Lohan and Miley Cyrus to Lady Gaga and Barack Obama. That’s precisely why Ziff went along with it when she claims Richardson suddenly told her to undress. “I felt pressure to comply,” Ziff told Salon back in 2014, “because my agent had told me to make a good impression because he was an important photographer who shot for all the major magazines and brands.”

More than 86 percent of models have reportedly found themselves in the same situation—of being instructed to disrobe without prior warning. With Richardson, others who have worked with him say that this is the norm. Jamie Peck, who was just 19 when she sat for the photographer, wrote in The Gloss that he asked her to remove her panties. When she informed him it was that time of the month, Richardson reportedly kept insisting, saying that she should take out her feminine hygiene product so he could make “tea.” “I love tampons!” she says he squealed.

Other complaints have been lodged against Richardson, including similar claims from models Rie Rasmussen and Charlotte Waters. Richardson, though, is hardly an isolated case. There’s Anand Jon, the fashion designer once hailed as one of the industry’s future power players, who was convicted of 15 counts of sexual assault in 2008, after seven young women claimed he raped them. Jon will spend the rest of his life behind bars, sentenced to 59 years in prison. But many abusers won’t be caught or even reported in an industry that encourages silence. “As a model, you’re meant to have a face and not an opinion,” model Yomi Abiola told Mashable.

Many of these girls are like Jesse, women who start out in the industry at very young ages. According to the Alliance, the average model makes her debut when she’s between the ages of 13 and 16, and “The Neon Demon” seems to be aware of what a precarious situation Jesse is in. Keanu Reeves (“The Matrix”) briefly appears as a seedy motel manager who offers her boyfriend the chance to sleep with a 13-year-old prostitute. “Real Lolita shit,” he promises. This theme, though, is quickly dropped in pursuit of Refn’s exploration of female jealousy and Sapphic necrophilia.

Nearly two decades into his career, it’s admirable that Nicolas Winding Refn would want to make a movie about his inner teenager and the pressures she might face in an industry where there are a thousand girls that would literally kill for her spot. (In “The Neon Demon,” they do.) It’s meaningless, however, if Refn isn’t willing to hold men accountable for their role in furthering a system where young girls are abused and torn apart. Women might be hungry for youth, but it’s powerful men who are getting away with feeding off it every day.