No justice for Pennsatucky: Watching "Orange Is the New Black" in the wake of Brock Turner

"Orange Is the New Black’s" exploration of the aftermath of Doggett's rape is nuanced, relevant — and hard to watch 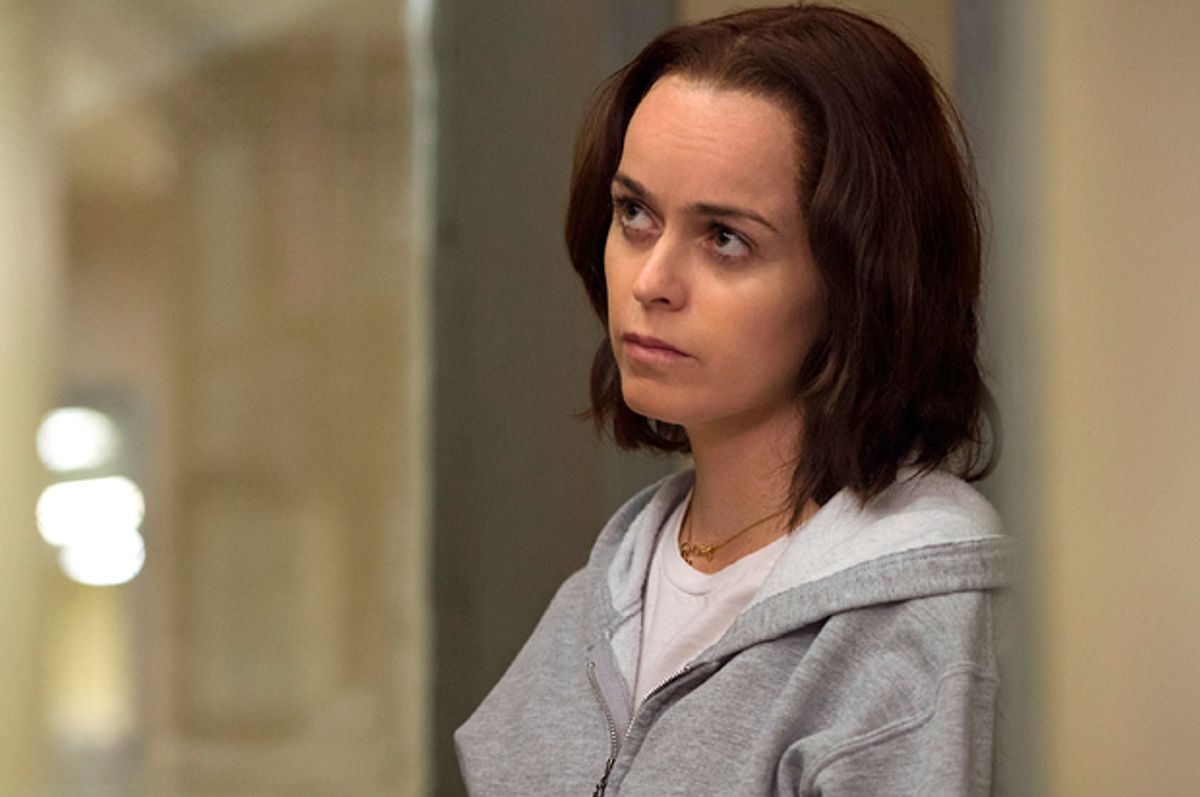 Plot details ahead for season 4 of "Orange Is the New Black."

Out of all the characters featured in Netflix’s “Orange is the New Black,” Tiffany “Pennsatucky” Doggett (played by Taryn Manning) may be the most challenging to consider. Not at first; Jenji Kohan and the rest of the writers molded her to suit the average viewer’s biased notions of how a poor, white criminal is supposed to look and act.

Finding out that Pennsatucky grew up trading sex for off-brand soda and had five abortions before she came to Litchfield was not at all surprising. That the kind of thing a girl like her does, right? An abortion clinic nurse’s disgusted reaction to her fifth procedure, a remark that led to Pennsatucky returning to the place with a shotgun, was just an example of someone saying out loud what a lot of viewers may have been thinking.

It was so simple to both adore and dismiss Pennsatucky in season one. But that was before she was sexually assaulted by a guard, Charlie Coates (James McMenamin), someone with whom she had cultivated a friendship riddled with troubling power dynamics.

The recently released season of “Orange Is the New Black” takes on an assortment of social and politically charged issues currently swirling in the zeitgeist – white privilege, transgender visibility, and racial discrimination in the legal system. But Pennsatucky’s tale combines the personal and political.

Pennsatucky has a deep Appalachian accent infusing every crumb of bad grammar that spills out of her mouth; her capability for comprehending nuance and metaphor is limited. She is a woman born into an awful family situation and to whom a number of us would therefore expect bad things to happen.

Her rape was one of season three’s most significant shockers and particularly difficult to process in its aftermath. It was the climactic act of one of the series’ most disturbing season three episodes “A Tittin’ and a Hairin’,” which began with a flashback to her mother greeting the onset of her first menstrual period with annoyance. Boys would start to see her differently, explained neglectful Pennsatucky’s mom, and soon after, they would “do” her differently.

“Best thing is to go on and let ‘em do their business, baby,” Pennsatucky’s mother tells her as casually as she serves her an ice cream treat. “If you’re real lucky, most of them’ll be quick, like your daddy. It’s like a bee sting, in and out, over before you knew it was happening.”

The act itself occupied a few violent seconds before the end credits rolled, occurring in a flare of Coates’ anger and ending with a close shot of a single tear rolling down Pennsatucky’s blank face. Coates, still thrusting into her, declared that he loved her.

The season three episode debuted in 2015, as the growing number of rape accusations leveled at Bill Cosby sparked renewed discussions about rape culture and the system’s blatant disregard for victims of assault.

With the fallout of 20-year-old Brock Turner’s light sentencing after being found guilty on three counts of sexual assault still being parsed, Tiffany Doggett’s season four storyline remains just as relevant for different reasons. Turner faced a maximum of 14 years in prison but instead received merely six months in jail, and could end up only serving three.

This, after the shattering letter Turner’s victim read out loud to him was released to the press and after his father wrote a plea to the judge not to ruin his son’s life over what he called “20 minutes of action.”

Our collective rage at a rich kid getting little more than a slap on the wrist after raping a woman by a dumpster, and still failing to take responsibility for doing so, adds a bizarre coloring to Pennsatucky’s journey in her rape’s aftermath.

Coming to terms with what happened and after choosing to halt an act of payback facilitated by close friend Boo (Lea DeLaria), in the current season of “Orange” Pennsatucky embarks on a healing quest that ends with her forgiving Coates.

Our growing acknowledgment of the pervasiveness of rape culture has not left many people in a forgiving mood when it comes to rapists. Women still face a system that erects barriers to receiving justice, starting from the moment that a woman chooses to report an assault, on through the struggle to get physical evidence analyzed and considered, and ending in the all-too-likely scenario that her rapist will escape conviction — or, as is the case with Turner, meaningful justice.

This is not an environment that makes it simple, or palatable, to consider forgiving Charlie Coates, one of Litchfield’s array of misguided “Nice Guys,” a man so clueless that he has to have his crime spelled out to him.

“You think I raped you?” Coates asks Pennsatucky, when she flat-out asks him if he’s similarly assaulting the woman who took over her van driving job, which she abandoned to avoid him.“…But I love you. I told you that. And I said it when… when… I said it.” That, he explains, makes the situation different.

“But that didn’t feel any different,” she tells him, before walking away.

This exchange actually represents character growth for Pennsatucky, a woman who, in the immediate wake of her assault, attempted to take the blame for Coates’s actions on her flirtatiousness.

It’s also the second significant confrontation between a victim of assault and the person responsible that we’ve seen on a recent episode of television. “That didn’t feel any different” is an economic version of the speech Sansa Stark gave to Littlefinger in earlier this season in “Game of Thrones,” when she threw the many abuses she suffered at the hands of Ramsay Bolton back in the face of the man who handed her over to him.

“I can still feel it,” Sansa said harshly. “I don’t mean, ‘in my tender heart, it still pains me so’… I can still feel what he did, in my body, standing here right now.”

The Pennsatucky who confronted Coates is likewise is a character embracing her own power – queasily, and troublingly, but taking the reins nevertheless. Her decision to forgive Coates, she explains to Boo (and the viewer, by proxy) is out of a refusal to continue suffering. “It ain’t about him,” she tells Boo. “I forgave him for me.”

That’s far easier to portray and explore than Coates’ perspective, part of season four’s uncomfortable humanizing of the men in Litchfield who commit terrible acts. Granted, the other guy received the expositional flashback treatment to show viewers that he wasn’t just a jerk. In contrast, all that we know of Coates’s life beyond the prison walls is that he enjoys heavy metal and has a second job at a donut shop.

From there a viewer can fill in the blanks of his psychological profile, if one so chooses. Half of his work life has him interacting with people in ways that are purely transactional. The other half, the one spent in Litchfield, grants him total power over women, including Pennsatucky.

It takes a few more conversations with Pennsatucky before Coates, haltingly, can admit that he raped her and actually say “I’m sorry.” Those words hold meaning for her. But as we witness in the pair’s final interaction, “I’m sorry” doesn’t mean he’s learned his lesson and gives no clues as to what he’ll do in the future.

Just before announcing his intention to quit his job, he admits that it’s taking everything in his power not to force himself on her again…except for one fact: “I don’t want to be what I was to you.”

None of this is easy to digest by any means. But they’re interesting additions to “Orange Is the New Black’s” exploration of sexuality and gender politics.

Pennsatucky’s evolution from a stereotypical cartoon who once sported a mouthful of yellow and black nuggets passing for teeth, into a figure of tragic complexity and relative calm, remains flawed. This is especially true of her womanhood’s origin tale, which stands in stark contrast to some of the most memorable mother-daughter discussions on television, notably a scene in a 1989 episode of “Roseanne.”

And it’s deeply different from the 1990 episode of “The Cosby Show” where it’s revealed that a Huxtable woman’s first period is marked by an event known as Woman’s Day, where Clair takes said daughter out for an elegant celebration that may include brunch at the Plaza Hotel and a carriage ride through the city. (Yes, that feminist moment happened on “The Cosby Show.”)

Comparing her mother’s “a tittin’ and a hairin’” speech to these experiences, Pennsatucky’s story implies that she was doomed to gravitate to a man like Coates from the start. Worse, it places a share of the blame for what happened to her on her mother.

But Pennsatucky’s transformation into a person who acknowledges her own worth, in spite of her history, belongs solely to her. That’s meaningfully highlighted by her attempt to move on, and to live for the life that waits ahead of her, in ways yet to be written.