"We have a right to engage in non-violent action": Christian leaders refuse to be silenced in struggle for Palestinian rights 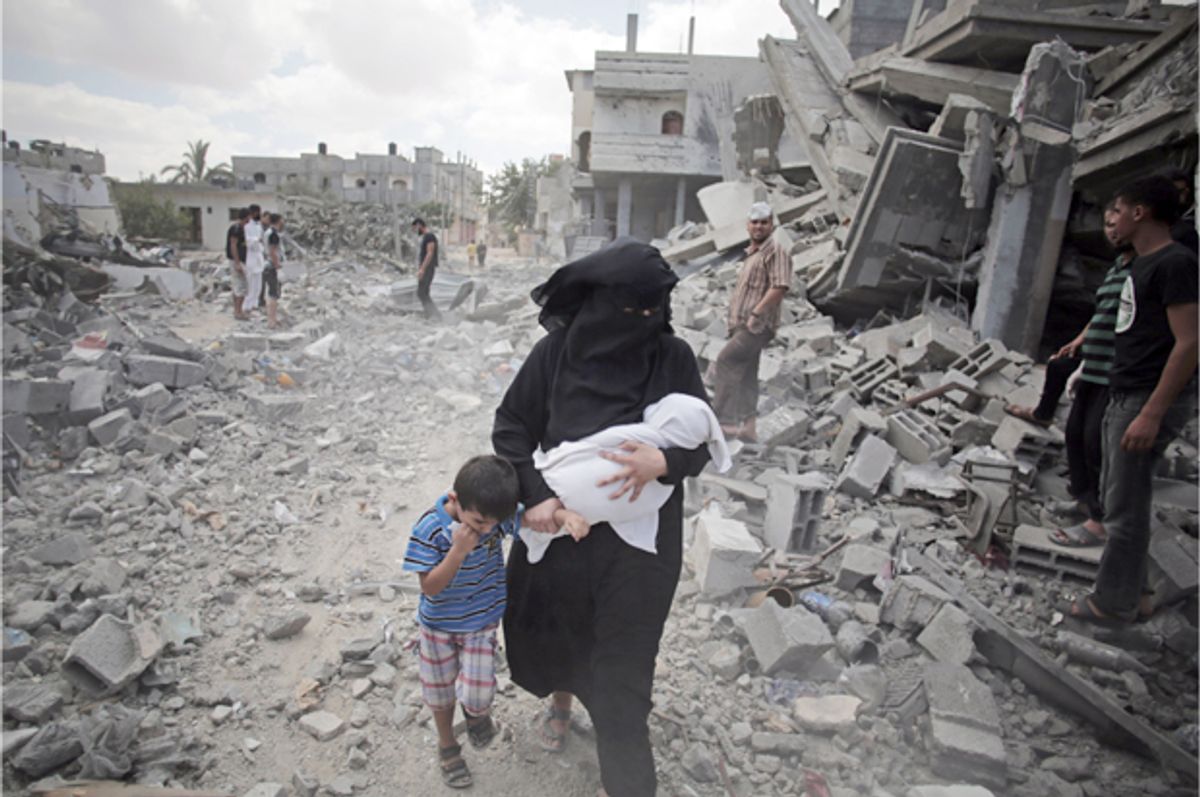 As is well-known by now, the unilateral decision of New York governor Andrew Cuomo to create a blacklist of businesses and organizations abiding by divestment and boycott campaigns related to Israeli human rights abuses has drawn widespread criticism for both its high-handedness and for its violation of constitutionally guaranteed freedoms.  As might be expected, the response from civil liberties groups and groups advocating for Palestinian rights was swift and pointed.   However, opposition also took the form of a letter drafted by the Reverend David Gaewski, New York Conference Minister, writing on behalf of the New York Conference of the United Church of Christ, a judicatory with 260 churches in the state of New York.

Noting the Church’s resolution to divest from “companies that profit from or that are complicit in violations of human rights arising from the occupation of the Palestinian Territories by the state of Israel,” and to “boycott goods produced in or using the facilities of illegal settlements located in the West Bank,” the letter actually asks that the church be put on the blacklist:

As a church, we have a right to engage in non-violent action to bring about change, including using economic leverage. All people and organizations have that right, and it is a right we must defend.  For this reason, with the full support of the Board of Directors of the New York Conference of the United Church of Christ, I respectfully request that the New York Conference, United Church of Christ be placed on the top of your list of organizations you would like the state of the New York to boycott.  Gov. Cuomo - stop denying our rights. Rescind your executive order now!

Gaewski told Salon that he wrote Cuomo because he felt “the executive order limits the rights and freedom of people of faith to enact faith-motivated actions toward peace. I am most concerned that the Governor is diminishing our freedom of expression.”  He explained that what drives the Church’s commitment to Palestinian rights is the belief that “a separate society where Palestinians do not enjoy the same rights as any other person living in the region can not result in peace.”  Gaewski added, “I think people of all faiths want to see peace in the birthplace of Judaism, Christianity and Islam.”

In fact, the discussion about what position to take with regard to Palestinian rights is taking place in several religious organizations, often as a continuation of many years’ discussion and action.  In May the United Methodist General Conference, despite pressure from the State of Israel and even the admonishment of church member Hillary Clinton, passed a number of resolutions for justice of Palestinians. Also, as the New York Times reported in January:

The pension board of the United Methodist Church — one of the largest Protestant denominations in the United States, with more than seven million members — has placed five Israeli banks on a list of companies that it will not invest in for human rights reasons… It appeared to be the first time that a pension fund of a large American church had taken such a step regarding the Israeli banks, which help finance settlement construction in occupied Palestinian territories.

And in April the Alliance of Baptists “affirmed the use of nonviolent boycott, divestment, and sanctions (BDS) strategies and comprehensive education and advocacy programs to end the 49-year Israeli occupation of Palestinian land.”

Most recently, at its General Assembly in Portland last week the Presbyterian Church (USA) debated several measures to address the injustices taking place in Israel-Palestine.  This is a continuation of a discussion from the June 2014 meeting, when it narrowly passed a divestment resolution. As the New York Times put it, “The vote, by a count of 310 to 303, was watched closely in Washington and Jerusalem and by Palestinians as a sign of momentum for a movement to pressure Israel to stop building settlements in the West Bank and East Jerusalem and to end the occupation, with a campaign known as B.D.S., for Boycott, Divestment and Sanctions.”  What we are seeing now is that that momentum has grown even stronger, and not only amongst Presbyterians.

Several overtures (resolutions) sponsored by the Israel/Palestine Mission Network of the Presbyterian Church were passed, including  “Advocating for the Safety and Well-Being of Children of Palestine and Israel,” “Calling for the RE/MAX Corporation to Cease Selling Property in West Bank Settlements,” “On Prayerfully Studying the Palestinian Civil Society Call for Boycott, Divestment, and Sanctions (BDS)” and “For Human Values in the Absence of a Just Peace in Israel-Palestine.”  It also urged Congress to hold hearings into the use of US military and police equipment by the government of Israel.

One other overture worth noting is “On Affirming Nonviolent Means of Resistance Against Human Oppression,” which points out that the PCUSA has a long history of using boycott and divestment as a way to side with those who are oppressed as well as to insure the integrity of its values and investments--the overture passed overwhelmingly in committee and in the plenary.

In its press release, IPMN noted two important aspects of the Assembly’s discussion.  First, that CEO and co-founder of RE/MAX sent in a letter declaring, “RE/MAX, LLC will no longer receive any income from the sale of Jewish settlement properties in the West Bank."  Marita A. Mayer, who advocated for the overture, stated, "We're pleased that RE/MAX is acknowledging that its operations in the occupied territories are problematic from a legal and moral point of view, but we're waiting to see what this means in practical terms."  And with regard to BDS, IPMN notes, “the plenary of the General Assembly supported by over 70% a continuing study of the global grassroots BDS (Boycott, Divest and Sanctions) movement for Palestinian rights and freedom. Rejecting attempts to categorically reject BDS and choosing instead to engage in prayerful study, the General Assembly recognized the historic commitment of the Presbyterian Church (USA) to nonviolent strategies for social change.”

We have made tremendous progress.  We are working to educate the church about the suffering and injustice that is taking place, sometimes with our complicity of silence.  I really believe that in order to advance the goal of divestment, we (the church, universities, etc.) are best served by asking our communities whether we want to profit from the harm caused to others.  I sometimes hear opponents say something like, ‘Well, this is a complicated issue and we have no business taking sides or trying to resolve it. Our divestment won’t do anything to advance the cause of peace.’ Rather than trying to explain 60 years of occupation, I have found that it is much easier to simply say, ‘I agree that it’s complex, but can we agree not to profit from the suffering of others?’

The UUA has adopted a human rights screen focusing on conflict zones that includes human rights violations in the occupied Palestinian territories. The UUA subsequently divested from Hewlett Packard Enterprise, HP Inc., and Motorola Solutions. The UUA has also divested from Caterpillar Inc., due to concerns over its environmental and social practices. These four companies have been the target of boycott and divestment campaigns due to their complicity in violations of Palestinian human rights.

At a time when politicians like Andrew Cuomo are not only not offering moral leadership on this issue, but rather exploiting it to carry out grandstanding (and illegal) acts, it is not surprising that these and other religious organizations are stepping up to fill that void.  This is precisely what happened during the Civil Rights movement in the United States and the anti-apartheid struggle in South Africa.

In 2014, Archbishop Desmond Tutu made this plea at a demonstration for Palestinian rights in Capetown:

… I appealed to Israeli sisters and brothers present at the conference to actively disassociate themselves and their profession from the design and construction of infrastructure related to perpetuating injustice, including the separation barrier, the security terminals and checkpoints, and the settlements built on occupied Palestinian land.

“I implore you to take this message home: Please turn the tide against violence and hatred by joining the nonviolent movement for justice for all people of the region,” I said.

This act of refusing to be complicit with injustice, of breaking one’s ties to an oppressive regime, is what these religious organizations, and people of faith, are undertaking.  And they are part of a much larger coalition of intellectuals, artists, writers, activists, trade unions, and organizations worldwide, appalled by the unfettered violence of the Occupation.