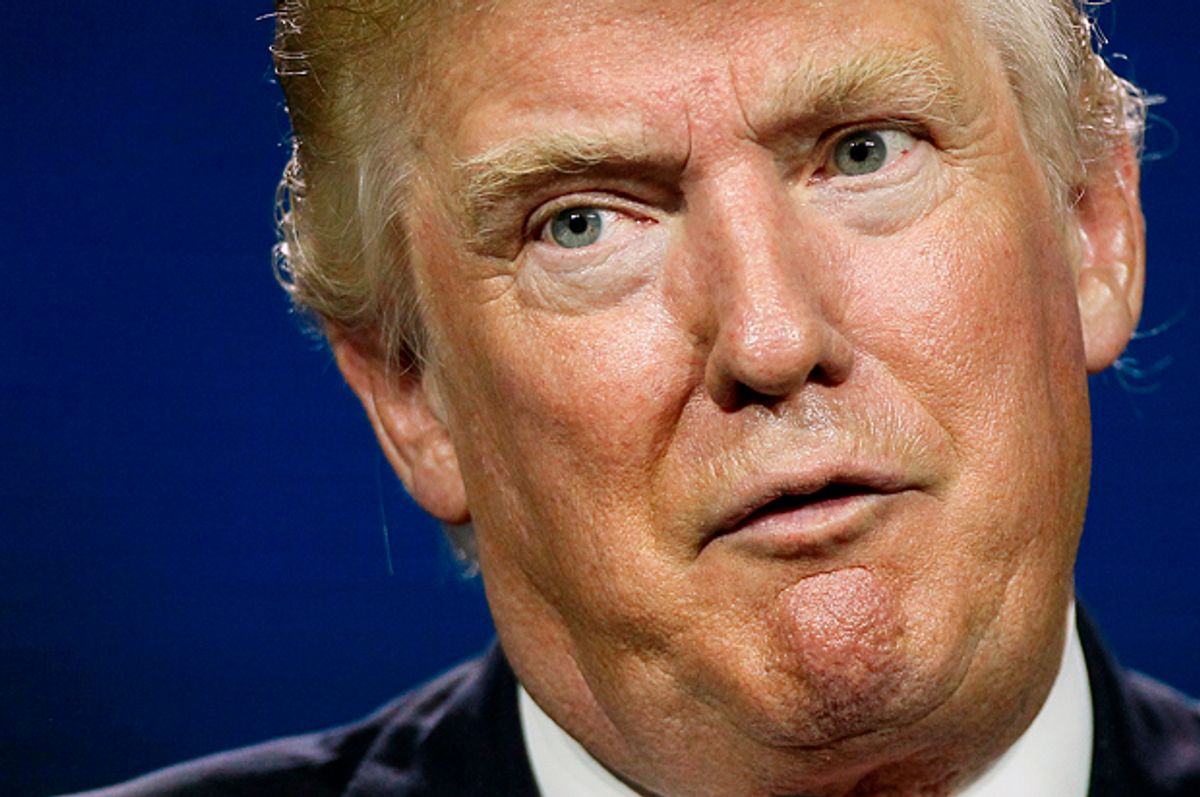 The mainstream news media and the pundit classes have framed Donald Trump’s rise to power in the Republican Party as something unpredictable and incomprehensible. In reality, Trump’s domination of the 2016 GOP presidential primary field is a function of larger trends in Right-wing American politics.

One of the most important—and little discussed—aspects of Donald Trump’s political ascendance is his borrowing from the military concept known as “4th Generation Warfare."

I recently spoke with sociologist and former United States Army civilian senior intelligence analyst Dr. James Scaminaci III about this strategy and what it reveals about Donald Trump’s connections to the most extreme elements of the American right-wing.

You have observed and studied right-wing American politics for many years. What is your take on this year's election?

The mainstream media wanted this mud wrestling spectacle between Trump and Clinton because of ratings and profits.  They now have their dream matchup.

I have supported Bernie Sanders from day one. I still support Bernie 100 percent.  Trump needs to be defeated, as does the neoliberal economic model and neoconservative national security model.  We need a more robust progressive movement and politics.  We need to keep organizing and we need to replace corporate Democrats with progressive Democrats.  The Democratic Party needs to be transformed into a party that represents the needs and aspirations of the 99 percent.

One of the dominant frames in the mainstream news media is that Donald Trump is some type of surprise, an aberration of sorts, that has come out of nowhere to bulldoze the 2016 Republican presidential field. Is this narrative accurate?

Trump is the logical outcome and expression of what has always been present in the Republican Party.

We also know from George Lakoff that the family model of the right-wing is the strict father model which is based on authority, obedience, discipline, and punishment.  This is consistent with the extreme rightward turn of the Republican Party.

Trump’s right-wing populism is also consistent with academic studies of the Tea Party movement in which supporters favored Social Security, Medicare, and Medicaid for people like themselves and opposed all types of social welfare programs for non-whites, people they thought were undeserving.

If you look at these deep, swirling undercurrents, why should it be a surprise that Donald Trump has triumphed?

In my writings here at Salon and elsewhere I have described Donald Trump as a proto-fascist. Do you think this description is accurate?

I defer to Chip Berlet, arguably one of the progressive movement’s leading researchers on the right-wing.  Berlet argues that while it is tempting to label Trump a fascist or neo-fascist, that he is in reality a “right-wing populist bully.”  Berlet has written that right-wing populism is based upon prejudice, bigotry, racism, demonization, scapegoating, and conspiracy theories aimed at the governing elite. Trump has used all of these devices and psychological weapons to vanquish his political rivals for the nomination and now to arouse rage in his supporters directed at very specific social categories.

I do not think we should get into a circular firing squad and squabble over terminology.  Berlet suggests that the strategy needed is to organize at the community level to protect the most vulnerable targets of Trump and his movement’s wrath.

In your writing and research, you have suggested that Trump's policy goals are not something cobbled together, random, or a product of his political naïveté and pandering to the GOP base, but rather, an example of what has been described as "4th generation warfare" (4GW) applied to American domestic politics. Can you explain this concept and how it helps us to understand contemporary movement conservatism, more generally, and Trump's rise, specifically?

A sub-component of 4GW is William Lind’s conspiracy theory of the internal war for supremacy between what he called “cultural Marxists” and their ideology of “Political Correctness” or “multiculturalism” and the “traditional American culture” or “Judeo-Christian culture.”  Lind argued that “cultural Marxists” hate America’s “Judeo-Christian culture” and were seeking to destroy it.  The losers were to be rich, white, conservative, Christian, heterosexual men.

This is where religious supremacy and white supremacy link up, and where Trump is attempting to fuse in his own person.

Internally, this clash of cultures is weaponized as propaganda campaigns designed to delegitimize whole classes of peoples:  Blacks and civil rights and voting rights; women and reproductive rights; the LGBTQ and gay rights; workers and labor rights; environmentalists and environmental laws and science.

Trump’s core policies are all consistent with Lind’s writings since 2005.  Lind called for a Berlin-style wall on the U.S.-Mexican border, supported the Minutemen militia on the border, likened Latino and Muslim immigrants to invaders that had to be stopped, considered Muslim immigrants an imported cultural disease, and, if good immigrants came in, it was the destructive Black culture that turned them bad, and opposed Wall Street conservatives.

Lind’s ideas have circulated throughout the right-wing for just over a decade.  Trump is just telling the Republican base what they have already heard or read.

Can you provide some more details about William Lind and Paul Weyrich? How influential are they for conservative elites?

The late Paul Weyrich was one of the four horsemen of the Christian Right who created that movement with the help of money from Coors and other billionaires.  Lind is an acknowledged expert on military strategy and is a formidable opponent.  Lind was his director of cultural conservatism at the Free Congress Foundation.

Weyrich was the strategic genius of the Christian Right.  His first master stroke was to convince the mainstream media that he and others had created a secular “New Right.” Weyrich created the Free Congress Foundation, the Heritage Foundation, the American Legislative Exchange Council, the Council for National Policy, and the Moral Majority.  The secretive Council for National Policy brought together conservative funding sources, political operators and strategists, and Christians to put financial resources into culture war campaigns.  Weyrich created the ad hoc Arlington Group to bring together political operators from inside and outside D.C. in order to have a centralized strategy with decentralized operations.

Weyrich and Lind allowed the racist Council of Conservative Citizens to take their video on “Political Correctness”, i.e. “multiculturalism,” and spread that into the white nationalist and white supremacist segments of the right-wing.

Mike Vanderboegh, the militia strategist and founder of the Three Percenters, is an avid promoter of Fourth Generation Warfare.

Of note, in 2001, Karen Yurica uncovered a Paul Weyrich-commissioned strategy document on the “New Traditionalist Movement.”  Weyrich and Lind endorsed the following 4GW operational strategy:  “Our strategy will be to bleed this corrupt culture dry. We will pick off the most intelligent and creative individuals in our society, the individuals who help give credibility to the current regime…. Our movement will be entirely destructive, and entirely constructive.  We will not try to reform the existing institutions.  We only intend to weaken them, and eventually destroy them…. We will maintain a constant barrage of criticism against the Left.  We will attack the very legitimacy of the Left…. We will use guerrilla tactics to undermine the legitimacy of the dominant regime….Sympathy from the American people will increase as our opponents try to persecute us, which means our strength will increase at an accelerating rate due to more defections—and the enemy will collapse as a result.”

Lind’s and Weyrich’s strategic documents are the writings of radical revolutionaries out to destroy an entire society and an entire belief system.  This strategy, however flawed the execution and the candidate, is now in the hands of Donald Trump.

Why hasn't the mainstream media spent more time discussing the hold that Lind's strategies have over the GOP?

Well, the mainstream media is not interested in ideas or policies or anything other than he-said, she-said journalism, horse race journalism, or stenography.

We need to move beyond the prevailing progressive model of preventing “hate speech” crossing the imaginary Maginot Line between the fringe and the mainstream.  As David Neiwert so persuasively argued in his brilliant book The Eliminationists, there is a conveyer belt that takes the most noxious, toxic ideas from the fringe, sanitizes them, and then spreads them into the mainstream media and the right-wing blogosphere.  The imaginary Maginot Line has already been breached and is hemorrhaging hate and bile.  There is a real need for progressive analysts to come together and understand the strategy, organization, networks, campaigns, and tactics of this right-wing movement. We cannot continue to do business as usual.

Apparently, a photo of Donald Trump with William Lind was posted on the latter's official website. Lind also wrote a white supremacist novel that is considered by many to be the spiritual successor to the infamous Turner Diaries. This is not the first time that Donald Trump has been linked to white supremacists. Is this just one more sign of how today's Republican Party is the country's largest white identity organization? Alternatively, even by those low standards, does Donald Trump's association with Lind represent something even more problematic and sinister?

I think the linkage between Donald Trump and William S. Lind should alert progressives and Democratic Party operatives that we are no longer in an era of normal politics.

Everything the Christian Right has been doing since 1980 was designed to delegitimize an entire society—its governing philosophy (liberalism), its mainstream political parties, its main institutions, the secular version of the Constitution, science (creationism, climate change hoax), and broad classes of people.  The Christian Right incorporated white supremacy and religious supremacy.  We did not appreciate the 4GW “cosmic war” coming with a growing gale force into our politics.

Trump is reaping what the Christian Right, Fox News, conservative talk radio, Christian radio and television, and the blogosphere has sown.

There has been much discussion of the "horse race" aspect of the 2016 election and how Trump was able to win the GOP presidential nomination. I do not think that he will win the general election. I am actually more concerned about what happens when Trump loses and where his racist, authoritarian supporters go next. Given the rise of the White Right in the Age of Obama, and Trump's fascist leanings, how do you think the militia movement and other violent Right-wing extremists will exploit Trump's defeat? In short, what happens next?

I think there is a need to worry about what happens when Trump loses.  The base may conclude that the establishment and/or the mainstream media defeated him.  There will still be hard core believers in his message.  There will be another Trump.  I do not know how someone could not see how relatively easily Trump destroyed his political rivals with a mixture of economic populism—saving Social Security, Medicare, and Medicaid, and maybe even supporting universal health care—with racism, nativism, xenophobia, religious intolerance, and authoritarianism.

As neoliberalism fails and the Democratic Party does not address its destructive consequences for ordinary people, the more likely the next Trump will be more successful.

The key strategists of the Christian Right—William S. Lind, Gary North, and Edwin Vieira—have written strategic assessments that the financial system will collapse.

The Patriot militia and other paramilitary groups are simply waiting for their turn to have fun.