Is it "sexist" to talk about Renee Zellweger's face?

A Variety critic gets slammed -- so how do we talk about actresses and aging? 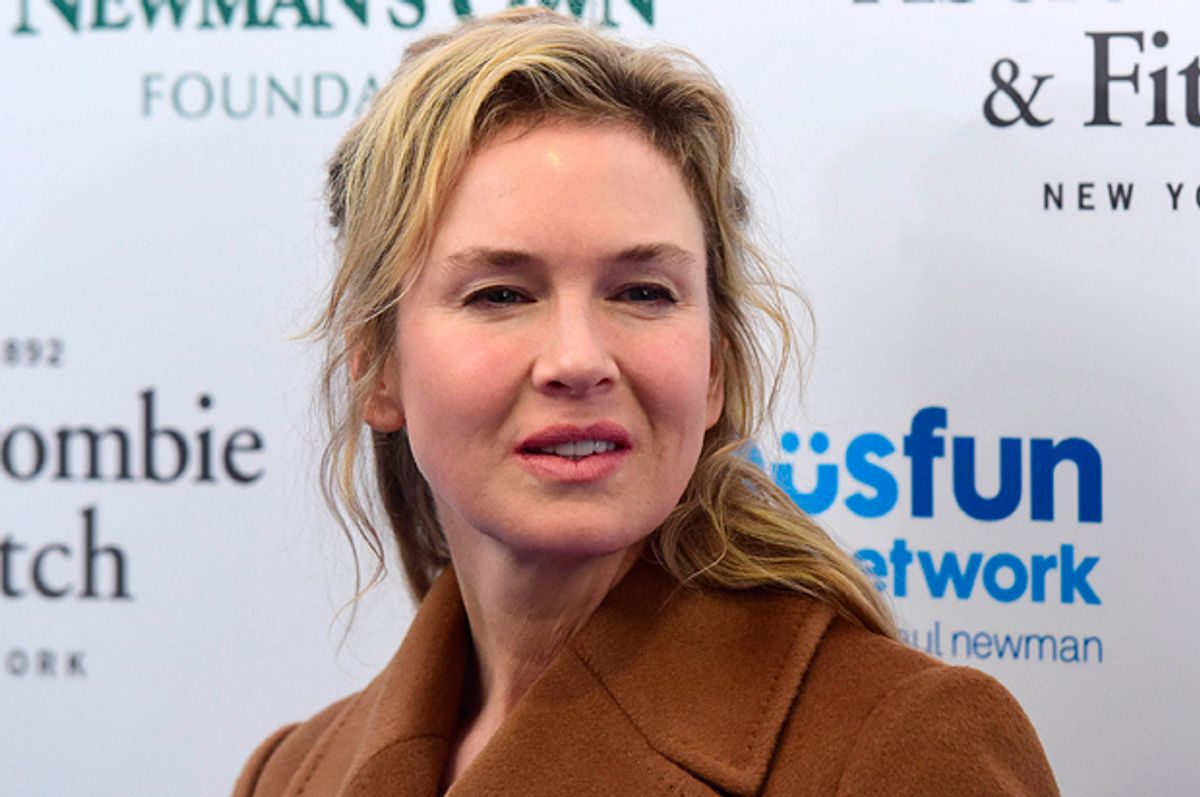 Colin Firth looks different now. In the trailer for "Bridget Jones's Baby," he is not the wet shirt-wearing Mr. Darcy of 1995's "Pride and Prejudice." Nor is he, for that matter, the loveably stuffy Mark Darcy of 2001's "Bridget Jones's Diary." That's because time has passed. The 55 year-old Firth now sports a few more lines and a touch of distinguished gray at his temples. Yet now that the promotion for the September release of the new installment in the "Bridget Jones" series has begun in earnest, you likely won't be subjected to a flurry of hand-wringing about whether that Oscar-winning actor is aging appropriately. But you might as well buckle up now, because the flurry of attention for his female costar is just getting started. And once again, nobody quite knows how to talk about Renee Zellweger's face.

Like plenty of female performers, Zellweger has spent the better part of her career under intense scrutiny/concern trolling over her looks. As Vulture adeptly pointed out Monday, the heated debate about Zellweger began first with her body, when she famously she put on weight (and looked, by the way, still entirely normal-sized) for the original "Bridget Jones" films and, in between them, slimmed down considerably for the musical "Chicago." But in 2014, after spending a few quiet years off the grid, she sparked a full-blown media freakout when she appeared at the Elle Women in Hollywood Awards bearing what some gossip sites tactfully called "A Stunning New… Fresh-Faced Appearance!" Others, less prone to equivocation, couldn't ignore that her new fresh face seemed to belong to someone else entirely. Her trademark squint was gone. Her skin was shiny and taut. But Zellweger steadfastly refused to acknowledge any outside intervention at the root of her drastically altered appearance, saying, "I’m glad folks think I look different! I’m living a different, happy, more fulfilling life, and I’m thrilled that perhaps it shows. It seems the folks who come digging around for some nefarious truth which doesn’t exist won’t get off my porch until I answer the door." But wait, why would truth ever be assumed to be "nefarious"? After all, a few years ago, after insisting that her occasionally immobile face was "completely natural," Nicole Kidman finally copped to having used Botox, to the shock of none. Gwyneth Paltrow has admitted she's Botoxed too, but the effects made her look "crazy."

But in the July issue of British Vogue, Zellweger continued to hold the line, describing her refreshed state by noting, "I was fatigued and wasn't taking the time I needed to recover between projects, and it caught up with me I got sick of the sound of my own voice: it was time to go away and grow up a bit." A healthy hiatus and the passage of a few years will no doubt leave a woman looking a little altered from her earlier incarnations, and if Zellweger is loving her life right now, that's terrific. And it should be noted that watching the 47 year-old in the "Bridget Jones's Baby" trailer, you can see evidence of some crinkles around her eyes. But as Owen Gleiberman pointed out in Variety last week, it's also nearly impossible not to feel a strong sense of "Did she or didn’t she?"

Gleiberman touched off a firestorm after writing that seeing the trailer, "I didn’t stare at the actress and think: She doesn’t look like Renée Zellweger. I thought: She doesn’t look like Bridget Jones! Oddly, that made it matter more. Celebrities, like anyone else, have the right to look however they want, but the characters they play become part of us. I suddenly felt like something had been taken away." But then, a perhaps well-meaning examination of character actors whose character seems blasted away went astray when Gleiberman pitched his case by saying, "The redemptive comic spirit of the 'Bridget Jones' films is the passionate drunk-girl-next-door everydayness of Bridget, the way that she’s no better than any of us — a spirit reflected, at least in the first two movies, in the slightly slovenly doughy-cuddly perfection of Renée Zellweger’s face." Sorry, man, but Bridget at her worst was still exponentially more beautiful than a great number of those of us inhabiting the non-Hollywood version of reality. And by couching the conversation of what happens in general when performers diverge from their trademark roles in such damning praise for the early-era Zellweger, Gleiberman only fueled the fire.

Christina Applegate promptly tweeted that "I'm sorry. But this is highly offensive. Our faces change. My eyes are smaller. My nose is bigger. I have jowls. But if I decided to play Kelly Bundy again, I would be her. Just different. Older, and wiser. Well, maybe not that." And Rose McGowan angrily declared, "I fully hope and expect every movie I direct to get a terrible review from your archaic out of date white male dominated rag." The pressure on public figures to not betray an inkling of human imperfection is real and it's stupid.

Okay but, are we just supposed to ignore it when an actor looks so drastically different? It's now been twenty years since the heyday of "Roseanne," when the actress who played its titular hero steadily diverged dramatically in appearance from what would be considered realistic for her working class character.  Twenty years since Roseanne publicly morphed herself away from Roseanne Connor. You couldn't not notice it. That's not ageism or sexism, that's a performer making choices that affected the credibility of a beloved role. How has so little changed in show business since -- except more actresses' faces? As Frances McDormand declared in 2014, "Something happened culturally: No one is supposed to age past 45 — sartorially, cosmetically, attitudinally. Everybody dresses like a teenager. Everybody dyes their hair. Everybody is concerned about a smooth face." Yet when Carrie Fisher reprised her role as Leia in the "Star Wars" series last year, fans rejoiced over her believably aged character. And while Zellweger can do whatever she wants with herself, it's entirely fair to point out that Bridget Jones belongs to everyone. It's not that Bridget has gotten older. It's that Renée Zellweger -- with her distracting new appearance -- isn't believable as Bridget any more.