Life of an author on the internet: "Someone on Goodreads took the time to write out 'Meh' as their whole review" 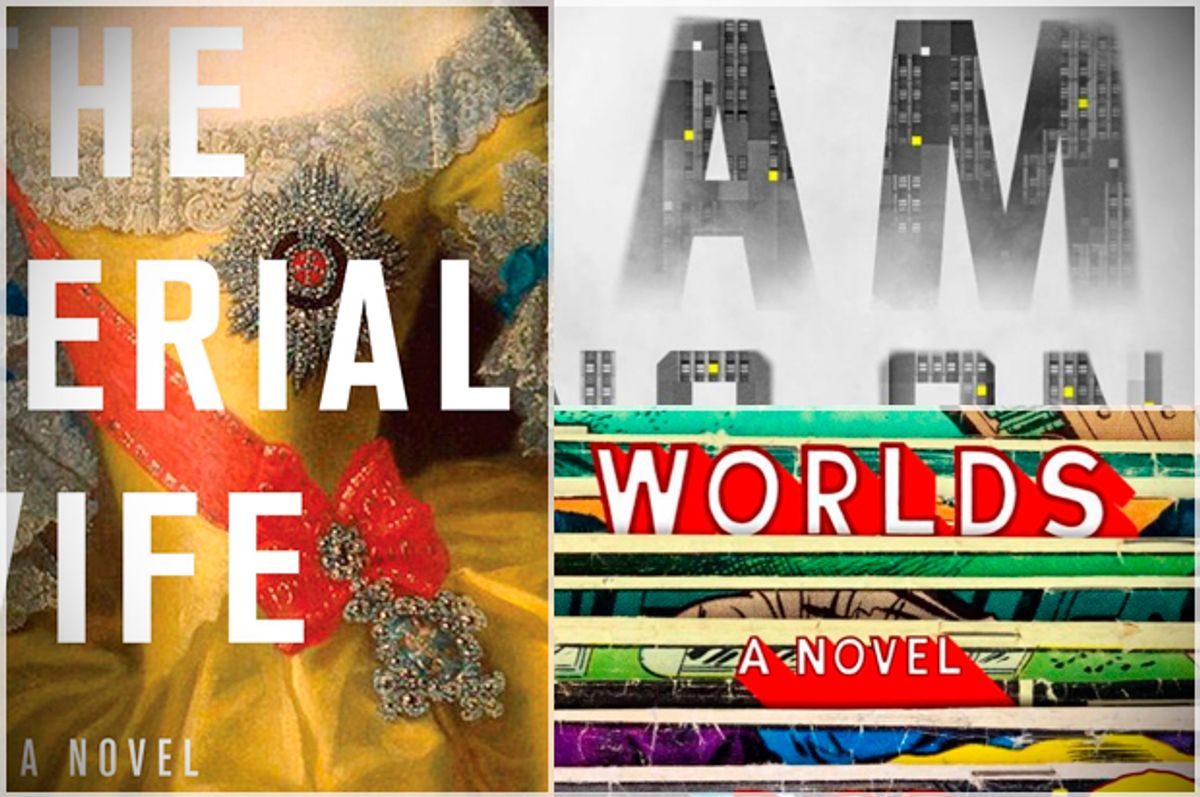 For July, I posed a series of questions — with, as always, a few verbal restrictions — to five authors with new books: Jennifer Armstrong ("Seinfeldia"), Patrick Flanery ("I Am No One"), Hannah Pittard ("Listen to Me"), Bob Proehl ("A Hundred Thousand Worlds"), and Irina Reyn ("The Imperial Wife").

ARMSTRONG: The impossibility of predicting success in mass culture, how a show can continue to infiltrate culture, and how that plays out in everyday real life.

REYN: What happens in a marriage when a wife is more powerful than her husband? In order to answer this question, it seems that immigrants in Queens and New Jersey, Catherine the Great, Russian oligarchs, Imperial relics and top auction houses had to all get involved.

PROEHL: How the fictions we share with each other define who we are and who we want to be. The intensity of the love between parents and kids, and the surprising emotional savvy of those kids. Being a parent who is also a person. Unabashedly loving things that are weird or uncool.

FLANERY: It’s about a man whose life is catching up with him, about troubled relationships between parents and children, the pain of leaving home and coming back to find that nothing is quite how you remember it. It’s about memory and desire, about film and other kinds of watching: voyeurism, surveillance, and the death of privacy. It’s about realizing that one mistake can ripple through life until it threatens to sink the whole ship. And it’s about transcending all of the dirt of the past and imagining, in the end, a new way of living.

PROEHL: Watching the end of Richard Donner’s "Superman" with my then eight-year-old stepson. Ziggy Stardust-era Bowie and Jim Starlin’s "Warlock" comics. The twenty-minute walk from Times Square up to New York City Comic Con. My wife’s time in a doctoral program while raising a small child. Schlepping longboxes of comics to suburban malls for a comic book dealer in the summer when I was a kid.

FLANERY: Miles Davis, walking the High Line in New York and looking into people’s apartments, drinking bad coffee on MacDougal Street in Greenwich Village, the Arab Spring, Edward Snowden, Florian Henckel von Donnersmarck’s "The Lives of Others," listening to an academic paper at NYU on Joshua Oppenheimer’s "The Act of Killing," ordering vegetarian pho from a grungy takeout place in Vancouver and eating it in an overpriced hotel staffed entirely by Russians, dreaming about David Hemmings’s white jeans in Antonioni’s "Blow-up."

PITTARD: On the RHETI, to an unhealthy degree, I am an Achiever. At work, we have been asked to stop using the copier. I worry that the internet is dulling our brains, our capacity to make important distinctions, our ability to be in awe of the world. Marriage is a terrifying institution. Is it possible ever to know another person?

REYN: The great adventure that is marriage, my dear friend’s job, Hillary Clinton, an eternal tussle with ambition, the beautiful and ominous city that is Moscow.

ARMSTRONG: Gratitude, luck, freelance writing, debt, almost feeling like I've figured out how to write a book, lots of interviews with very funny and intimidating people, trips to Los Angeles, and lots of TV.

FLANERY: Teaching; commuting on four different forms of public transport; a growing sense of alienation from London, where I’ve lived since 2010; trying to start a family with my partner; wanting to move back to New York, which I left in 2001; fearing that I’ll never own property; worrying about aging parents who live across an ocean.

FLANERY: “Thriller.” I don’t have a gripe with thrillers, but I don’t think anything I’ve written could be mistaken for one, at least not in strict genre terms. A student in South Africa who was studying my first novel, "Absolution", wrote to tell me it was “monotonous” and implored me to “make a YouTube Channel” to explain it. Not just a video. A whole channel.

PROEHL: Kirkus said the book occasionally “lurches into overwrought, look-at-my-MFA-style writing.” I don’t have an MFA to look at, so that hurt. Someone on Goodreads took the time to write out “Meh” as their whole review. I admire that dedication to sharing your indifference with the whole Internet forever.

REYN: Unlikeable protagonist. This has to do with reading fiction through the lens of life rather than the lens of fiction.

PITTARD: Accessible, inaccessible, baffling, shoddy, and my all-time favorite complaint (courtesy of an Amazon review): “She writes a little too well, and that is what bothered me some about this novel.”

ARMSTRONG: Ugh, you're trying to get me to read my bad reviews, aren't you? How about "bogs her story down a bit with too much detail?" Probably not the worst thing anyone's ever said, but infuriating as a journalist and nonfiction writer who worked hard to get that detail.

If you could choose a career besides writing (irrespective of schooling requirements and/or talent), what would it be?

REYN: The busy magazine editor as portrayed on film. I want the whole mise-en-scène: the oversized coffee cup, the rush to important meetings, the white architect’s desk before a soaring midtown Manhattan view, the pencil skirt, the wise-cracking assistant.

PITTARD: In my heart, I’m a comedian—not a successful comedian, but one who is both sad and deeply committed to the art.

FLANERY: Architect, or visual artist (painter), or film director, or psychoanalyst. A job that somehow combined all four careers would be ideal. In other words, Werner Herzog, except I’ve heard he doesn’t believe in psychoanalysis.

PROEHL: If money were also no object, I’d go back to bookselling or working in a record store. Being around people who are excited about completely non-essential things.

PROEHL: Dialogue and description are probably my strong suits, and I’m good, or maybe just obsessive, about structure. I like doing little moments and quiet bits. I’d like to be a better plotter, or the kind of writer who has massive emotional moments where if it were a musical, it’d be the scene where everyone is singing interconnected songs as loudly as they can at the same time. Or chase scenes or something. I didn’t for this book, but I also write excellent cats.

FLANERY: I’m not convinced it’s possible to be objective about this. I feel confident about structure, I think I have a good ear for dialogue, and I tend to trust in my instincts about the balancing and rhythm of a sentence, letting it unwind over a series of sometimes unlikely sub-clauses. I sometimes wish I could write radically compressed prose, but I’m coming to accept that minimalism is not my mode, at least for now.

REYN: Because of my nostalgic sensibility, I’m best with setting and observation, bringing a particular period to life in a fully immersive way. I have this paranoia that every character sounds like me so I take it easy on the dialogue.

PITTARD: I hate my vocabulary. I love my understanding of grammar and punctuation. I should have read less Faulkner when I was younger.

ARMSTRONG: I'm a good reporter thanks to a few years of torture at local newspapers, and I know my subject matter, TV business and history. I'd like to be better at the poetry of writing—metaphors, that kind of thing.

ARMSTRONG: Easy! I write about television shows with a proven audience. As a nonfiction writer, I'm forced to take care of this at the proposal stage. Then I do lots of work to research my topics. By the time the book is out, I'm pretty confident. I embrace my hubris. I earned it.

PROEHL: It wasn’t something I worried about writing this one, because I was still writing for myself and friends who were socially obligated to feign interest. I was getting affirmation here and there in the form of fellowships and residencies, which kept the hubris fed. Now I’m writing a second book in the shadow of a first one that hasn’t even come out, and I’m freaking out all the time. It can get paralyzing, but I’m still enjoying the work enough to keep moving forward on it.

FLANERY: I’m in a constant battle against self-doubt. It doesn’t help having a father who said, after I’d been unemployed for more years than I want to recall and my first book finally sold to publishers, ‘How will you stay humble?’ Family sometimes works overtime to keep the ego in check, but it doesn’t make writing fiction any easier.

REYN: For me, writing flows best when I convince myself I’m the book’s only reader. Now that it’s out, let’s just hope that doesn’t turn out to be true!

PITTARD: I’m writing to make sense of the world. I’m doing this for me and, to a certain extent, also for you, if you’re interested. If you’re not interested, I get it. After all, Faulkner exists, Spark exists, Maxwell and Lessing and Roth and James and Hawthorne and Barthelme and Beattie exist. As long as you’re checking in with one of them from time to time, you’ll probably be all right. If you want to check with me every now and then, I’ll be flattered. At the end of the day, though, I’m doing this in order to sleep better at night and to be slightly less burdened during the day.