Pay attention, America: Donald Trump and the lessons of Brexit

Brexit supporters led their country into an abyss and now have no clue what to do. Trump will do the same thing 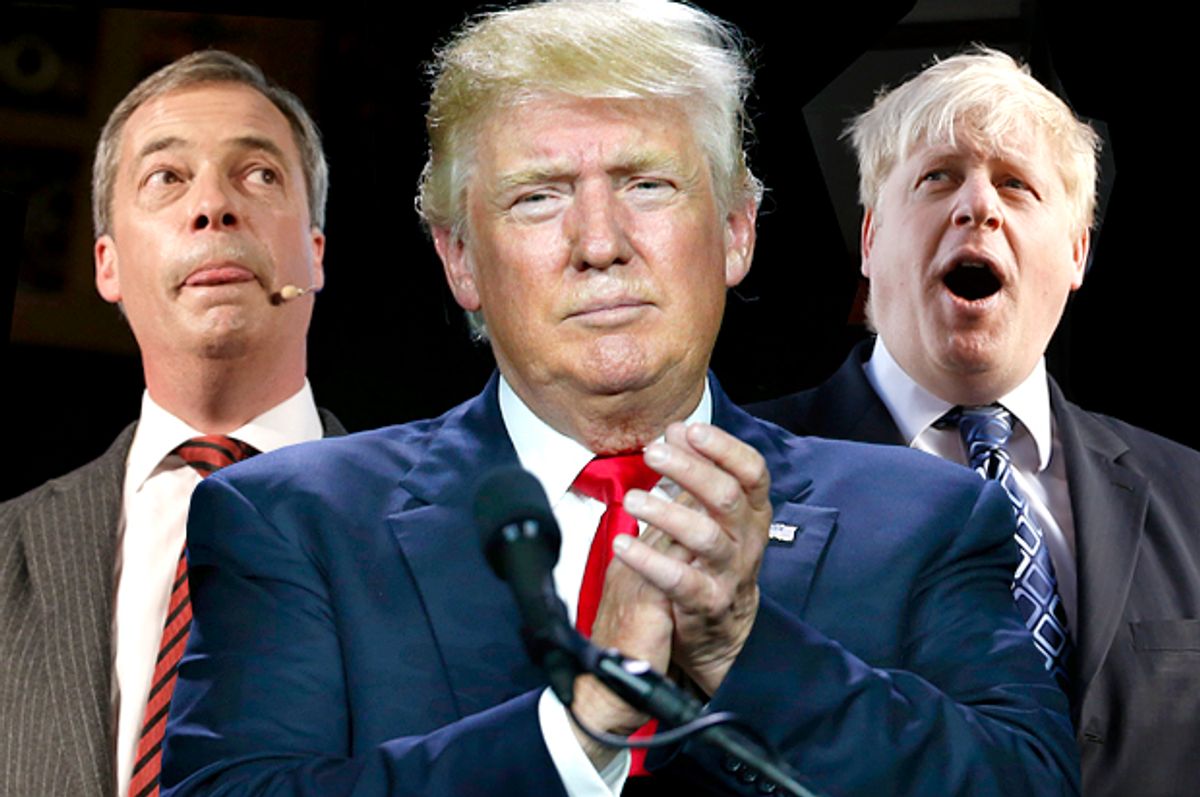 It all happened so fast. Less than five months ago, British Prime Minister David Cameron announced that the UK would hold a referendum on whether to remain in the European Union. Cameron was a weak leader who was ensnared by his right-wing antagonists. He had a persuasive case to make but failed to do so. Rather than win the argument, he agreed to hold a referendum without considering the full implications of that vote. Now Britain's political future is as uncertain as its been since the WWII period.

There were many forces behind Britain's Leave campaign, but two leaders stand out: Boris Johnson, the former mayor of London, and Nigel Farage, the former leader of the UK Independence Party. Expert demagogues, they whipped working class voters into a frenzy, stoking racial resentment and inventing crises at every turn. They exaggerated the threats, misrepresented the facts, and exploited economic angst.

Confused and angry, British voters took the bait. They opted to leave the European Union, believing they were “taking their country back.” But no one really explained what that meant. Amid the paroxysms of rage, voters forgot to ask tough questions like “What is the European Union?” or “What are the implications of leaving it for England?” Indeed, Google reported that these were two of the most popular search phrases in Britain after the polls closed. Only now are voters learning that their financial markets are in turmoil, their pound is plummeting, and that most of the claims made by Brexit proponents were spurious. As The New York Times reported, pro-Leave politicians are already backtracking on the many false promises made during campaign. “A lot of things were said in advance of this referendum that we might want to think about again,” said Liam Fox, a former cabinet minister. Translation: we lied about the problems and therefore the solutions we proposed aren't applicable.

Now the ship has sailed and people are scrambling to make sense of it.

If they're looking for help on that front, they won't get it from Johnson or Farage. Both men have promptly abandoned their posts. Johnson pulled out of the race to become Britain's prime minister. He bowed to fellow conservative, Michael Grove, who saw no use for Johnson's substance-free demagoguery now that the referendum has concluded. As for Farage, he has slithered back into retirement following the Brexit campaign. “During the referendum, I said I wanted my country back,” he remarked on Monday, “now I want my life back.” Having achieved his ambition of destroying Britain's ties to the rest of Europe, his work is done. But the disaster he and Johnson helped create is just beginning. It falls to others to pick up the pieces, to navigate the enormous economic challenges ahead.

The Brexit supporters followed their “leaders” into an abyss. They were sold a bill of goods and once the checks were cashed, there was no one on the other line to greet them. This ought to sound familiar to American voters. What happened in Britain can – and in many ways is – happening here. Trump is following the same playbook as Johnson and Farage. Unlike Johnson and Farage, who at least have meaningful political experience, Trump is merely a brand, applying his marketing techniques to a political process long governed by the laws of public relations. Tactically, though, he's playing upon the same grievances.

A campaign built purely on nativism can go a long way in American politics, but not this far. Trump understands that people have lost faith in governing authorities. The “establishment” is just a catch-all term for the elites and technocrats running the country. This is a system in which people no longer feel invested. It's an inert system, born of greed and divorced from the citizenry. The role of a firebrand like Trump is to issue vague promises while giving the discontents a bogeyman to blame (immigrants, refugees, Muslims, etc.). This is what Johnson and Farage did in Britain and it's what Trump has been doing since he launched his presidential campaign. It probably won't win him the White House, but it has ruined a major political party and brought the country to a precipice.

The crucial lesson to draw from the Brexit vote is that a democracy can drive itself off a cliff given the right stew of propaganda, resentment, economic uncertainty, and political corruption. It's terrifying that millions of Americans are so blinkered by bigotry and hate that they don't even care that Trump is openly conning them. At this point it's about blowing up a broken system, not about the candidate himself.

But the critical question to ask is, “What comes next?” British voters failed to ask this question, and millions of Trump supporters have as well. Were Trump to win in November, his response would likely mirror his British counterparts. Beyond the bottled up rage and the rhetorical excesses, there's nothing there – no plan, no solutions, no vision. He's an agitator, not a leader. Given his willful ignorance on nearly every issue of consequence, there's no reason to suppose he even wants the job. In fact, the best thing that could happen to him would be to lose the election, blame it on a rigged process, and then create a new media business with the audience he's cultivated, a move he's already considering according to this and other reports.

Johnson and Farage disappeared once their country was forced to reckon with the choice it made. They pulled the grenade pin and fled before the blast. What happens next is anyone's guess. Perhaps they didn't think they'd win. Perhaps Trump believes the same. But if he does win, his sham campaign will be exposed and the country will be stuck with the bill.

If you want to know what looks like, ask a British friend.