Dana and Donald: The California rep would be a match made in twisted-politics heaven for Trump

Putin-defender Dana Rohrabacher shares many of the backward ideas of Trump, making him a perfect running mate 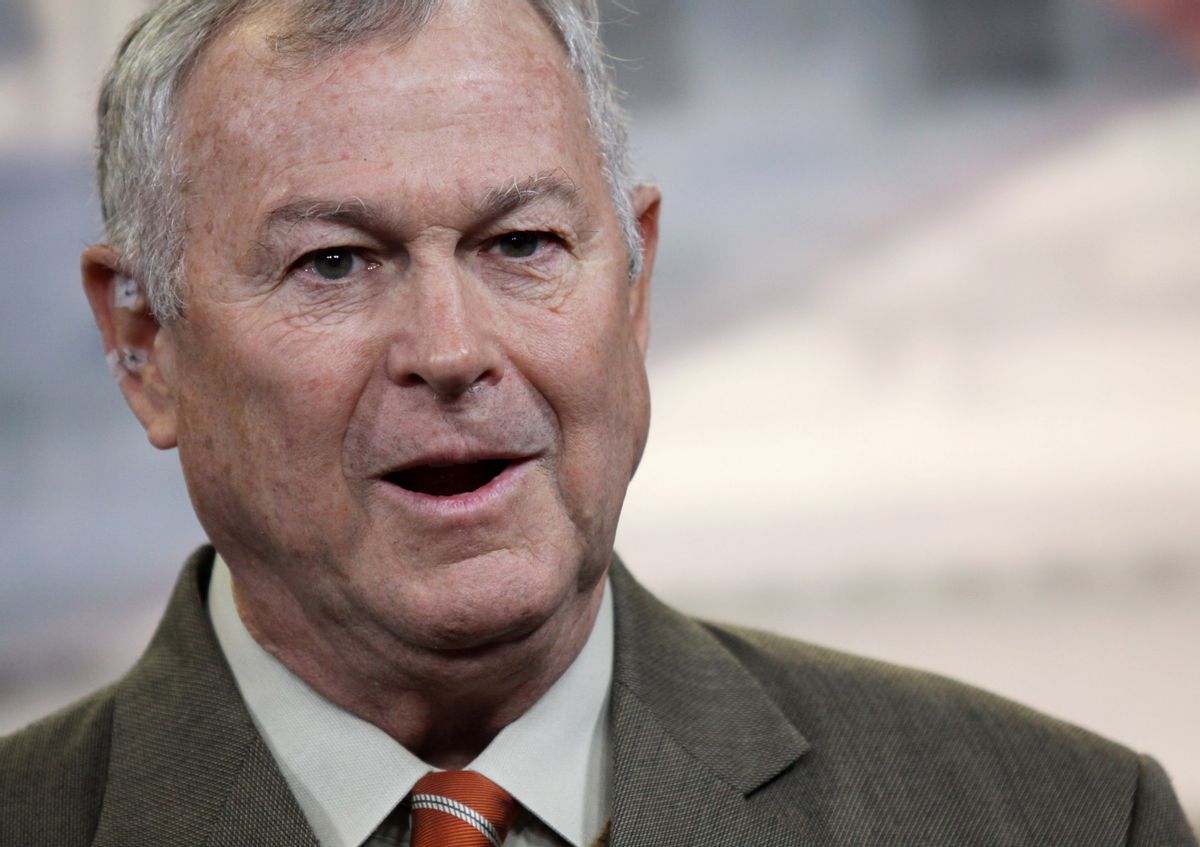 Rep. Dana Rohrabacher, R-Calif. speaks during a news conference on Capitol Hill in Washington, Thursday, Nov. 13, 2013 to discuss marijuana laws. Members of Congress from states with legal pot are banding together to tell their colleagues on Capitol Hill not to interfere with state drug laws. (AP Photo/Lauren Victoria Burke) (AP)
--

Facebook
Twitter
Reddit
Email
view in app
Watching Trump VP short-lister Bob Corker unable to come up with anything more positive to say about the presumptive nominee at Tuesday night's rally in North Carolina than "he has nice kids" and "the reason you love him is because he loves you" shows just how difficult it's going to be for anyone with even the slightest interest in a political career beyond Fox News pundit to fulfill that job. Nonetheless, it appears that there are quite a few Republicans willing to be considered. Trump's been "vetting" them like crazy and the list even reportedly includes the hot GOP stars of tomorrow, first term Senators Arkansas' Tom Cotton and Iowa's Joni "the crown jewel" Ernst.

But after reading this fascinating story by Maria Danilova of the AP over the week-end you might wonder why one of them isn't Rep. Dana Rohrabacher of California. They would seem to be a perfect match. Rohrabacher is a quirky individualist who, like Trump, marches to his own drummer. He's been in Washington since the 80's and knows his way around congress which is something Trump has said he wants in a VP. And they share an admiration for certain big strong manly man:

A former speechwriter for President Ronald Reagan, the 14-term Rohrabacher takes pride in having worked to weaken "our major global enemy at that time, the Soviet Union." A large photo in his office shows him in the hills of Afghanistan in the 1980s, where, he told The Associated Press in an interview, he launched rockets at Soviet positions as a volunteer fighter.

Rohrabacher's view changed when the Soviet Union collapsed in 1991, and Russia emerged as a different country. Although he acknowledges that opposition leaders face repression in Russia, he also says the country allows religious freedom and is generally more open than its predecessor.

In the mid-1990s, Rohrabacher got a taste of Russian politics, he says, when he welcomed a delegation of young Russian political leaders, which included Putin, who then worked for the mayor of St. Petersburg. After a friendly football match, the group went to a nearby pub and started arguing over whether the Soviet Union lost the Cold War. The debate turned into an arm-wrestling match between Putin and Rohrabacher, which Putin won.

"I ended up with Putin, and he beat me just like that," Rohrabacher said, snapping his fingers.

One suspects that Trump would never be so humble. But his appreciation for Putin runs along the same lines. Rohrabacher is a major defender of Putin and the Russian government in the congress and a lot of people think it's a little bit obsessive, particularly his willingness to take the part of some Russian officials on whom the US government has imposed sanctions for the jailhouse death of a Russian whistleblower. Rohrabacher intervened, meeting with these officials privately and with officers of another Russian firm associated with the crime under investigation in the US. He then tried to get the House Foreign Affairs Committee to drop this case from a bill imposing sanctions on human rights abusers from other countries, even trying to implicate the victims of the crimes as the real perpetrators despite all evidence to the contrary.

This would be a mildly interesting story about a minor Russophile congressman, except for that passing reference in the AP story to the picture of Rohrabacher in the hills of Afghanistan in 1980s. You see, before he entered into his bromance with Putin, there was his affection for the strongmen of Afghanistan, the Taliban and the Mujahideen, some of whom later became al-Qaeda. And his comrade in arms in that was none other than Grover "drown government in the bathtub" Norquist, conservative movement activist and head of the group Americans for Tax Fairness which makes Republicans sign the "no new taxes" pledge that ties the government up in knots.  There's a fascinating story about the two of them in the early Bush era from the Orange Country Weekly.

After 9/11, Roharabacher was a loud and angry critic of the government for failing to anticipate the attacks and he got a lot of press attention for it. But to the OC Weekly, it looked like a massive misdirection from his own activities. They had documents showing that Rohrabacher had been lobbying on behalf of the Taliban throughout the '90s  and had "maintained a cordial, behind-the-scenes relationship with Osama bin Laden's associates in the Middle East — even while he mouthed his most severe anti-Taliban comments at public forums across the U.S."

There's worse: despite the federal Logan Act ban on unauthorized individual attempts to conduct American foreign policy, the congressman dangerously acted as a self-appointed secretary of state, constructing what foreign-affairs experts call a "dual tract" policy with the Taliban...

Evidence of Rohrabacher's attempts to conduct his own foreign policy became public on April 10, 2001, not in the U.S., but in the Middle East. On that day, ignoring his own lack of official authority, Rohrabacher opened negotiations with the Taliban at the Sheraton Hotel in Doha, Qatar, ostensibly for a "Free Markets and Democracy" conference. There, Rohrabacher secretly met with Taliban Foreign Minister Mullah Wakil Ahmed Muttawakil, an advisor to Mullah Omar. Diplomatic sources claim Muttawakil sought the congressman's assistance in increasing U.S. aid—already more than $100 million annually—to Afghanistan and indicated that the Taliban would not hand over bin Laden, wanted by the Clinton administration for the fatal bombings of two American embassies in Africa and the USS Cole. For his part, Rohrabacher handed Muttawakil his unsolicited plans for war-torn Afghanistan. "We examined a peace plan," he laconically told reporters in Qatar.

Grover Norquist was also at the Qatar meeting and said the whole thing was just a chance meeting in the hallway.  (Today Norquist is being hounded by right wingers Ken Adelman and Glenn Beck for his alleged ties to the Muslim Brotherhood -- a weird right wing crusade that nobody ever seems to know quite what to make of.)

All of this would probably make Rohrabacher a tainted choice for Trump's VP although you never know. After all, while Trump has not yet admitted that he admires the Taliban Mullah leadership for their strength, he did give Saddam Hussein major props in his speech Tuesday night, so it may not be the deal breaker one would think it would be.

Trump-Rohrabacher, the strongman ticket. It's got a ring to it.