It's not just Saddam Hussein: Trump has a long history of googly-eyed admiration for dictators 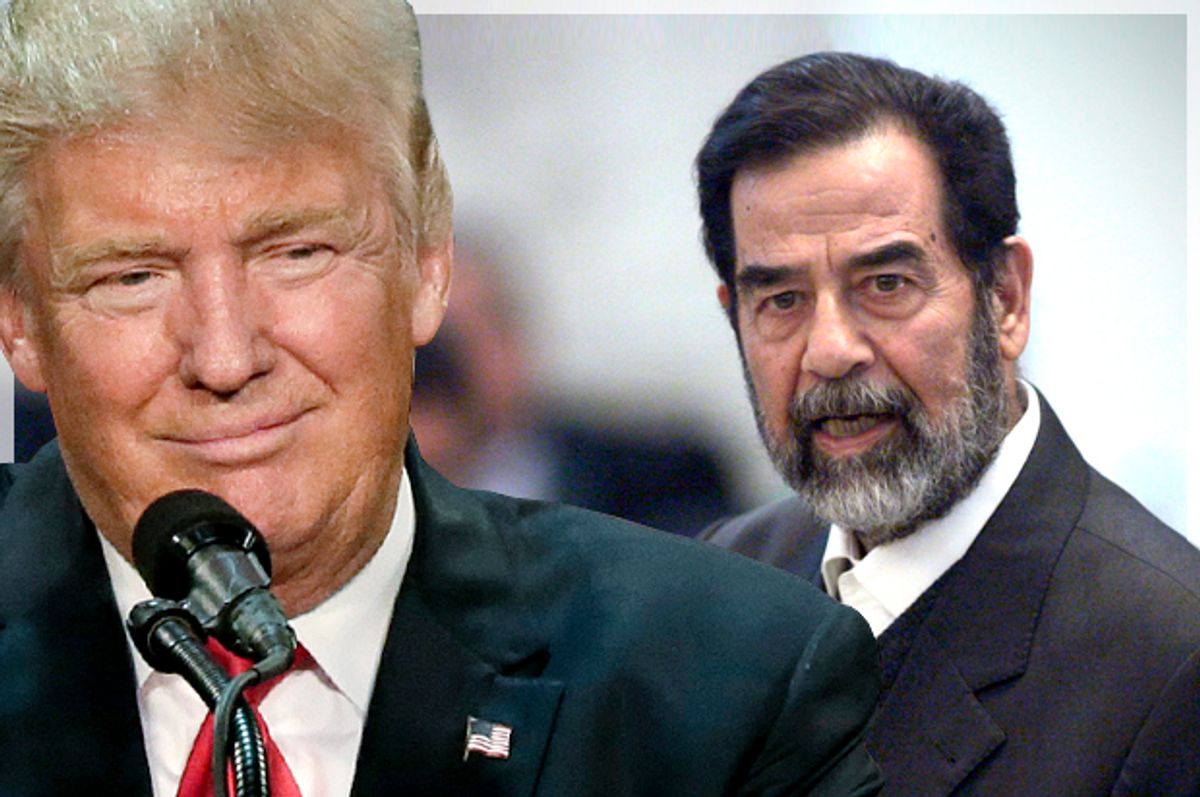 Donald Trump, ever ready to snatch the news cycle away from Hillary Clinton (even when the news about her isn't flattering), did it again Tuesday night during a rally, when he praised ousted and executed dictator Saddam Hussein.

"He was a bad guy — really bad guy," Trump said, in his standard ass-covering way, before he launched forth with the meat of his opinion. "But you know what? He did well? He killed terrorists. He did that so good. They didn't read them the rights. They didn't talk. They were terrorists. Over. Today, Iraq is Harvard for terrorism."

(To quote "Game of Thrones," "nothing before the word 'but' really counts.")

This isn't the first time that Trump has trotted out that non-witticism about the "Harvard of terrorism." He rolled out that same line in January 2014, at an event for the New Hampshire Institute of Politics and the New England Council.

"You know, whether you like Saddam Hussein or not, he used to kill terrorists," Trump said. "I mean, terrorists did not have fun in that country. Now, that's the Harvard of terrorism."

In 2011, he gave an interview to Human Events sharing the same sentiments, saying, "He didn’t give them a trial like this country, where the trial lasts for 21 years. He used to shoot the terrorists and kill them. There were no terrorists, very little terrorists in Iraq."

And, in February this year, Trump offered Hussein the highest praise he can imagine: That he's not "politically correct".

This infatuation with Hussein is just part of a larger pattern of Trump's. Trump loves a dictator. He can't help but gush with praise at those who use violence to oppress their people.

At the top of the list, of course, is Vladimir Putin, who Trump repeatedly swoons over like he's a 12-year-old at a Justin Bieber concert.

In 2015, Trump went on "The O'Reilly Factor" to gush over how awesome it is that Putin is backing Bashar al Assad.

"I think in terms of leadership, he’s getting an A and our president is not doing so well—they did not look good together," Trump griped, openly wishing that President Obama was a little more like Putin.

Trump returned to the well of comparing Putin positively to Obama in March, telling Jake Tapper, "As far as Putin is concerned, I think Putin's been a very strong leader for Russia. I think it's been a lot stronger than our leader, that I can tell you."

As Franklin Foer at Slate convincingly argued this week, Putin and his aides are quite aware that Trump goes to sleep snuggling a photo of the Russian dictator every night, and are seeking ways to support Trump's run, knowing that nothing would destabilize the United States and strengthen Russia's position like a Trump win.

After all, Trump's campaign manager is Paul Manafort, a man who literally built a career out working public relations for dictators, including shoring up Ukrainian support for pro-Putin candidate Viktor Yanukovych.

But Trump's love of dictators expands well beyond just his swooning infatuation with Putin. His enthusiasm is far-ranging and even crosses ideological lines.

In 1990, for instance, Trump turned his goggly eyes towards the Chinese government in an interview with Playboy.

After sneering at Mikhail Gorbachev for not having "a firm enough hand", Trump praised China for knowing how to really stomp out freedom.

"When the students poured into Tiananmen Square, the Chinese government almost blew it," he explained. "Then they were vicious, they were horrible, but they put it down with strength. That shows you the power of strength."

When asked about this by Jake Tapper in 2016, Trump tried to hedge, saying, "I said that is a strong, powerful government that put it down with strength, and they kept down the riot. It was a horrible thing. It doesn't mean at all I was endorsing it."

This is the game that Trump plays, whether he's praising Putin, Hussein, the Chinese communists, or any other dictator that he admires: He swears up and down that he thinks it's "horrible" or "bad" to violently oppress people, but then makes it very clear that he still thinks it's the best way to go about business.

Trump's message is clear: Yeah, they're the bad guys, but you need to be a bad guy to get things done.

"We would be so much better off if Qaddafi were in charge right now," Trump said during a Republican debate in February.

His reasoning wasn't just about the instability caused by deposing leaders. It was clear he though that Qaddafi was uniquely capable of leading in a way that a leader who respects human rights cannot be, saying at least Qaddafi " killed terrorists, all right?"

He did the same two-step with Kim Jong-Un, saying, "If you look at North Korea – this guy, he’s like a maniac, OK? And you have to give him credit."

"I mean, this guy doesn’t play games. And we can’t play games with him," he continued, all but wiping the drool off his chin.

Yes, they're evil, but evil is admirable because it's effective: That's the through-line that holds all these Trump arguments together.

Trump should not get an ounce of credit for his half-hearted ass-covering about how whatever dictator he's loving today is "bad," because "bad" isn't really all that bad in his eyes. Not when he mistakes it for a sign of strength, which is all that Trump really cares about in the in end.