A modern day lynching: Why I will not watch the video of Alton Sterling being killed by Baton Rouge police 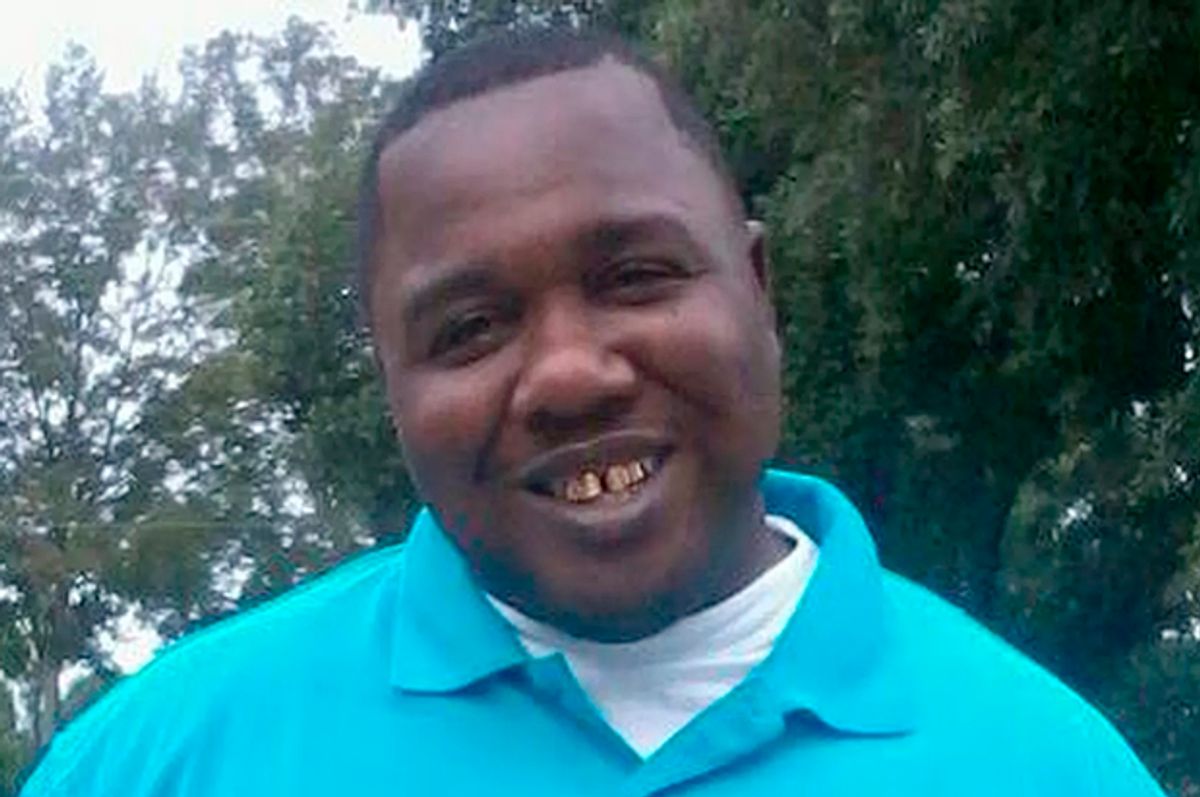 Another person has been added to the Necropolis of Black Death in the Age of Obama. On Tuesday, Alton Sterling was killed by two Baton Rouge, Louisiana police officers. They used a taser, held him down, and then proceeded to shoot him multiple times with their pistols. Alton Sterling had committed no crime. He had no weapon in his hands. What was his capital offense? Being black, a man, and selling CDs and DVDs outside of a convenience store — a store which was owned by his friend Abdullah Muflahi.

Muflahi managed to record the killing of Alton Sterling by the Baton Rouge police. He would later describe the two officers who killed Sterling as acting unnecessarily “aggressive” towards him. If not for Muflahi’s footage, Sterling would be just another black man killed by America’s police under “suspicious circumstances." The  Justice Department is now investigating.

I have made a decision to not watch the video of  Sterling being killed by two Baton Rouge, Louisiana police officers. I know what black men who have been killed by state violence, racial pogroms, and street vigilantes look like.

I have seen those broken black bodies portrayed on lynching postcards as white men, women, boys, and girls stand proudly nearby, confident and without any shame after they vanquished the black body from their midst.

I watched a New York police officer choke to death Eric Garner as he pleaded for his life, gasping that, “I can’t breathe”.

I saw Michael Brown’s body left in the street like common refuse after a white cop named Darren Wilson shot him repeatedly.  Wilson would later summon the racial logic of the white lynchers who ran amok during Jim and Jane Crow America as he told a Ferguson, Missouri jury a fantastical story about Michael Brown: "The only way I can describe it, it looks like a demon, that’s how angry he looked. He comes back towards me again with his hands up." Wilson would continue his racist fables about Michael Brown with, “"When I look up after that, I see him start to run and I see a cloud of dust behind him."

In that moment of testimony, Michael Brown was transformed into the “black imp of the inferno”; human kindling for a pyre of hate. Americans should never forget that it is not just Islamic terrorist groups such as ISIS/ISIL who burn people alive. Immolation was a central feature of the ritualistic violence that white Americans committed against thousands of black people in the United States during the 19th and 20th centuries.

I will never forget the body of 17-year-old Trayvon Martin, his white and red sneakers pointing upward as he lay on the grass after being shot to death by the street vigilante and wannabe cop George Zimmerman. The latter is a man whose reckless and criminal behavior since that encounter (and, yes even before) has repeatedly demonstrated to any fair observer that it was Trayvon and not Zimmerman who should have been in fear of his life.

And then there is young Tamir Rice, a 12-year-old year boy killed by an incompetent Cleveland police officer who took less than 2 seconds to decide if he should steal away the life a child.

The video-recorded killings of black and brown people by police in the United States are a type of political violence. They do the work of intimidating, frightening, and bullying entire neighborhoods and communities in the service of white supremacy and institutional racism. As I recently discussed with Professor Courtney Baker, the attacks by police, street vigilantes, and other agents of the state on black Americans is a contemporary version of lynching culture in the digital age.

I believe that it is psychologically and spiritually unhealthy for black Americans to watch such imagery. Police brutality is not a surprise to us; it is an all too common personal experience; it is not the stuff of anecdotes, abstraction, or apocryphal storytelling. Police thuggery against people of color is a continuity and fixture along the color line in the United States and around the world.

Perhaps such images are of use for raising awareness among white folks about the realities of police thuggery and violence against non-whites? White Americans need this education much more so than people of color, as it is an antidote against white denial, white lies, and the many other aspects of white privilege that allow too many of them to say they are “shocked” or “surprised”, when (again), another story about police brutality against non-whites is forced, if even for a moment, onto the national stage.

But there should be caution here too: in a moment when “old fashioned” white racism is resurgent with Donald Trump and his minions, and the Republican Party functions as the United States’ largest white identity organization, there are likely a good number of white Americans who are titillated by video recordings of  police violence against people of color. Here, the killing of black folks is made to justify white on black murder and other types of violence.

I will not and cannot feign surprise or shock at the killing of Alton Sterling by the Baton Rouge, Louisiana police. I have written many essays on such happenings during the last ten years. It is a type of painful tedium, a rerun of sorts—as opposed to being a bug or outlier or aberration—in American life and culture.

Because this story is so familiar, I can already predict the dominant narrative.

Alton Sterling will be called a “thug” by conservatives and the right-wing media. This ugly word is a polite way of calling Alton Sterling a “nigger," and thus justifying his killing by the Baton Rouge police.

The comment sections on Fox News, Breitbart, and the other Right-wing “news” outlets will drop the veneer of “polite” racism and will most closely resemble those of overt white supremacist websites run by the by Ku Klux Klan and Neo-Nazis.

Police apologists and fetishists will trot out tired talking points about how America’s cops have a “difficult job” that is “extremely dangerous." In reality, being a police officer in the United States does not even rank among the 10 professions with the highest fatality rates. Truck drivers, loggers, and commercial fisherman have more dangerous jobs. Most police officers are killed in traffic accidents as opposed to being gunned down in the streets.

These same police excuse-makers will say if “black people” just “submitted” to the police or “cooperated” they would not be shot dead. This ignores how black and brown folks have been killed by America’s police while sleeping in cars, seeking help, answering the door, pulling out their wallets to get identification, surrendering, and innocently standing outside on street corners or sitting on the porches of their homes.

The lie that is the “Ferguson Effect," will of course, make an appearance. This is an obligatory deflection in the moment of Black Lives Matter.

The same voices will speak of how most cops are “good” and the “problems” are caused by a few “bad apples. It is outside the narrow limits of approved public discourse to highlight how the so-called “good cops” are complicit with the “bad cops” because the former, more often than not, give cover to and protect the latter.

Right-wing pundits will find a way to blame Alton Sterling for his own death. If Trayvon Martin was “armed” with a bottle of ice tea, and Michael Brown had a deadly weapon with his “big, black, scary self," perhaps Alton Sterling was trained to use CDs and DVD’s like ninja throwing stars?

Black conservatives will be trotted out like Pavlov’s dogs to talk about the “dysfunction” and “bad culture” within the African-American community.

The fact that Alton Sterling had a gun in his pocket, in a state with one of the country’s most lenient gun laws, will be referenced repeatedly. White folks can brandish weapons with impunity; black folks who choose to have guns on their person do so at their mortal peril in the extreme.

White racial paranoiac thinking and the White Gaze will combine to generate a narrative where two heavily armed police had a reason to be “in fear of their lives” as they used a stun gun on, beat, subdued, and then shot to death Alton Sterling as he lay on the ground. “Negrophobia” is a powerful force that is often used to escape punishment when America’s police violate African-Americans’ human rights.

Alton Sterling’s criminal record will be discussed as a way of legitimating his killing. The Baton Rouge police would not have had this information when they attacked him. Moreover, an individual’s criminal record does not empower police officers to act as judge, jury, and executioner.

Ethically corrupt, morally deranged, and dishonest voices will want to somehow connect the police killing of Alton Sterling to so-called “black on black” street violence in cities such as Chicago. A complication: police are sworn to protect and serve the public. Gang members and drug dealers are not.

The most confused and intellectually challenged members of the American Right-wing will even go so far as to suggest that protesters should focus on the numbers of “black babies” who are “murdered” each year by “abortions” instead of the black folks unjustly killed by the police. A parallel argument will be summoned that the killing of black people by America’s police is “infrequent” and “uncommon”. Thus, protests and anger are better directed towards other issues. This too is empty, dishonest, and problematic reasoning.

For example, the kidnapping and murder of white women and children is a highly uncommon event. Yet, the moral panic that has been described by media scholars as “missing white girl syndrome” routinely dominates news programming in America. Apparently, “White Lives Matter” much more so than those of people of color.

There are many questions that should be asked about the killing of Alton Sterling by the Baton Rouge, Louisiana police department. They include, why do America’s police routinely kill black people at a rate three times higher than whites?

[The rate is twelve times higher as compared to other “developed” countries.]

As a matter of policy, America’s police do not report the number of people they kill to either the public or the Department of Justice. Why is this tolerated? America’s police are much more likely to quickly escalate to the use of lethal force than are police officers in other countries—even when faced with similar threats. What is wrong with police culture in the United States?

And rarely asked or considered, what has gone so wrong with America’s economy that adult men such as Eric Garner in cities such as New York and Alton Sterling in Baton Rouge are forced to sell cigarettes, CDs, and DVDs in order to provide for their families?

When America’s police unjustly kill black and brown people, members of the poor and working classes, the handicapped, mentally ill, homeless, disabled, and other people stigmatized as “the Other” with impunity, such a public policy outcome is a choice. Consequently, Alton Sterling and so many others are dead because a large portion of the White American public, as well as private interests, opinion leaders, and other elites deem it so. There will be no substantive or transformative criminal justice reform in the United States because police brutality is a type of social control that maintains a racist and classist status quo. Alton Sterling is dead because of that fact. He will not be the last person who is killed by America’s police in order to enforce such a wrong, bigoted, and anti-democratic political order.