Following the Trump money: He's running his campaign just like his casinos — as a big scam

Trump's campaign has been sloppy at best and fraudulent at worst, reports show — and he's getting away with it 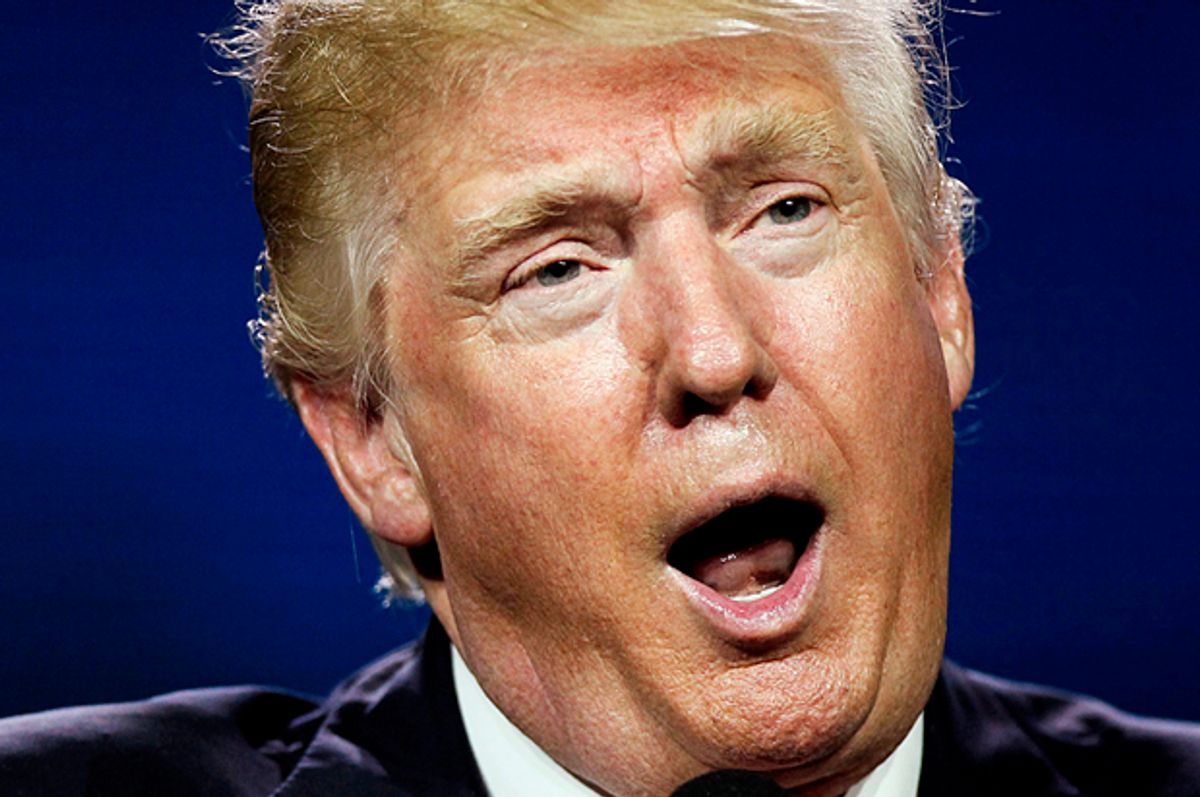 Facebook
Twitter
Reddit
Email
view in app
The Trump campaign finally had some positive news to release Wednesday. They have apparently been able to raise over $50 million in the month of June for the presidential campaign. Unfortunately, the press release is as clear as mud and nobody knows exactly when and how the money was allegedly raised or whether the campaign has cash on hand or how much was raised from big and small donors. TPM reported:

"The way the release is written makes it difficult to determine precisely how much Trump raised and for which committees and during which time period," Rick Hasen, an election law expert and professor at the University of California at Irvine School of Law, told TPM. "So, we’ll have to wait for the official FEC report before we know for sure what the money figures actually look like."

There was also no word on how many of the foreign politicians they illegally solicited came through for them but they are still working hard to get them to donate. This letter went out yesterday to a Scottish MP:

However, he had to hope that anyone who gave money didn't listen to Hillary Clinton's speech in Atlantic City Wednesday or they might regret their "investment" the same way virtually everyone who has ever done business with him regrets theirs. (I wrote about his Atlantic City debacle for Salon a while back.) Clinton laid out the whole story along with the other exposes that have been done on his failed  projects in Florida and Baja California as well as scams like Trump University. Let's just say his record is nothing to brag about.

Marty Rosenberg, one of Trump's many victims spoke as well:

Over a quarter of a century ago– Over a quarter of a century ago, I was one of the contractors participating in building the Taj Mahal. It was this time that Donald Trump made a promise to me, my family, and to the people of Atlantic City.  If you do a good job– if you do a good job, in a timely manner, you will be paid an agreed upon, agreement. This promise went unfulfilled. Trump’s actions caused great financial burdens to most of us. Some lost their businesses, some went through a bankruptcy, all suffered emotionally. All the while, Mr. Trump went about his extravagant lifestyle, never giving any of us a second thought. I am here today to help ensure that this sort of manipulation of people by Trump will not continue on a national stage.

If his recent FEC Reports are to be believed, he's running his campaign in similar fashion. The May report showed that just as he always paid himself first in his failed businesses, he is also funneling millions from his campaign back into his own companies and family enterprises. He paid himself $350K or the use of his personal jet and  $125K for Trump restaurants. Meanwhile, $65K went for golf and 4K to his son's wine company. His largest single expenditure for staging went to his own resort Mar-a Lago. He also paid for his family's travel expenses, which seems unnecessary since they are all multi-millionaires.

The report had a number of very odd expenditures including one to an entity called "Draper-Sterling" an obvious reference to the TV show "Madmen." It was traced to a residence in New Hampshire owned by someone peripherally associated with some political consulting and a group called Patriots for America which was involved with a Missouri Senate race. (You can read about the whole strange story at Think Progress.)

And Wednesday CNBC reported that a close look at Trump's FEC filings show that his campaign has been sloppy at best and fraudulent at worst in its payments to its own staff:

A series of filing anomalies point to a Donald Trump camp that is either unaware of campaign finance law, or is actively funneling donors' cash to insiders, according to several experts interviewed by CNBC.

These "red flags," as one expert deemed them, include a total lack of disclosure on which vendors staffers for the presumptive Republican nominee are paying, an "unusual" six-figure payout to campaign staff for nontaxable expenses and what appeared to be double reimbursements for some employees' expenses.

If he's having his staff pad their expense reports and phony up vendor payments he is as low rent and cheap as it gets. If he didn't know about it then his reputation as a genius businessman who will snap the federal budget into shape is, shall we say, overstated. And it's entirely possible that it's downright criminal:

The Trump camp's handling of so-called contribution refunds also sparked questions. All Trump staffers who logged "in-kind" purchases were both reimbursed for those costs and also appeared to receive a second payment in the form of a campaign contribution refund.

In addition to representing a second payment, this practice raises questions because contribution refunds are normally for donors who exceed their legally defined limits, not paid staffers, multiple experts told CNBC...

Importantly, Gross said, this method of payment "has the net effect of giving the appearance that the campaign is receiving more donations than it is even though the cash on hand works out in the final analysis.

The CNBC report is very thorough, looking at individual line items which show some very dicey entries that certainly appear to be in keeping with his longstanding practice of taking expenses off the top of all his losing enterprises before they crash and burn. Or it may just be that neither Trump or anyone who works for him has the slightest idea what they are doing.

CNBC audited the campaign reports before it had much money. If it's true that they've collected somewhere between $25 and $50 million for the campaign in the last month then the real grift is just about to kick in.  Remember, Trump told Fortune magazine back in 2000, "it's very possible that I could be the first presidential candidate to run and make money on it."

It's not as if he didn't warn anyone.