Carnage in America: From Dallas to St. Paul — the infinite cycle of gun violence and tragedy

5 officers are dead in Dallas: We're a nation overcome by gun violence and bereft of answers 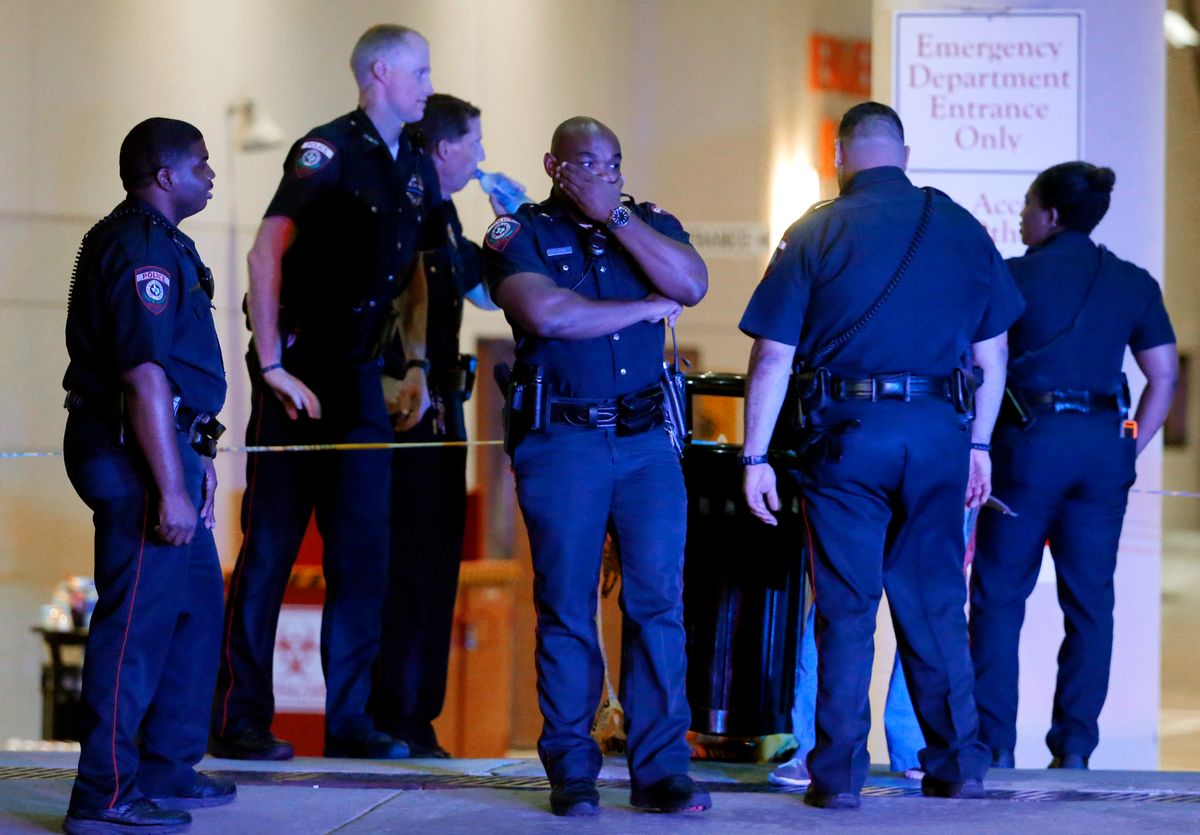 A Dallas police officer covers his face as he stands with others outside the emergency room at Baylor University Medical Center in Dallas. (AP)
--

Thursday afternoon the nation was once more reeling from news of police officers shooting black men, one in deep south big city Louisiana and one in the upper midwest suburban Minnesota. These two cases are a little bit different from the ones we've dealt with in the recent past in that both men were legally armed but from what we could tell were not threatening the police. Louisiana, where Alton Sterling was shot point blank while on the ground in police custody, is an open carry state meaning that anyone is allowed to have a gun on their person in public with no questions asked. Minnesota, is a concealed carry state and the other victim,  Philando Castile, was shot after telling the officer that he was licensed and armed.

And then, horrifyingly, came another mass shooting last night, a horrific sniper assault on Dallas Police Officers as a peaceful protest against the Sterling and Castile shootings was coming to a close. This is what it looked like before the shooting started:

As I write this one of the suspects has killed himself and police are questioning others. I have no idea what motivated this beyond the obvious desire to kill policemen. All I know is that we've had yet another mass shooting, this time culminating in 5 police officers dead, 11 shot in a shoot-out on the streets of Dallas Texas. That familiar sense of disorientation has overtaken me as I contemplate yet more carnage caused by gun violence in America.

I was watching the CNN coverage last night and they featured a tourist on the phone saying that he'd seen a black guy wandering around the protest carrying a semi-automatic wearing camo gear  and they'd informed the police. As he was talking, the police released a photo of this man saying he was a suspect and the tourist identified him as the man he saw. Within a short period of time it was determined through social media and video that he was not involved in the shooting and had actually turned his gun over to the police. The man's name was Mark Hughes and his brother Corey was one of he organizers of the march.

Hours later the brothers appeared on CBS after Mark Hughes was released and Corey said that he originally brought his brother to the cops because he was afraid that someone was going to shoot first and ask questions later. That was my first thought as well. Open carry is legal in Texas, but a black man is very brave on a good day to do it. Yesterday was not a good day. He was vilified throughout the nation as a suspected cop-killer but he was luckier than Alton Sterling or Philando Castile or the five policemen and the dozens of others around the country who were shot and killed over the past few days. At least he lived.

Guns are supposed to protect us aren't they? But this week you had two African American men who believed that they could protect themselves with a gun and it was their guns that got them killed. Another African American man legally carrying an AR-15 at a protest was tagged as a murder suspect and in the febrile atmosphere of that awful scene is very lucky he wasn't killed. After Newtown and Paris and every other mass shooting we were told that the answer to these problems is for more people to be armed so they can "take out" the bad guys when they start shooting. After Orlando, Donald Trump even mused on the stump that it would have been "beautiful":

“If we had people, where the bullets were going in the opposite direction, right smack between the eyes of this maniac. And this son of a bitch comes out and starts shooting and one of the people in that room happened to have (a gun) and goes boom. You know what, that would have been a beautiful, beautiful sight, folks.”

Well, in Dallas last night dozens if not hundreds of highly trained good guys with guns were unable to stop madmen from killing four of their own and injuring seven more. And it was anything but beautiful.

African Americans are in mortal fear of being shot by police. They carry guns for protection and they get shot because of it. Police are in fear of being shot as well and our ongoing national shame of racism leads many of them to overreact when they deal with black suspects. Last night police officers were marked for death by killers with semi-automatic rifles. It's not just that guns are the tools of death, they are also the reason for the carnage. All these guns, all these deaths are making people crazy with fear and stress and paranoia. They're giving all of us PTSD.

As Amanda Marcotte noted yesterday the NRA had nothing to say about police officers killing black citizens who were legally carrying guns this week. Their minions in the GOP have refused to do anything about the ongoing gun violence after mentally ill people shot up college campuses and movie theaters and elementary schools and night clubs. Thousands of children dying in gun accidents every year doesn't move them. They cannot even bring themselves to regulate the semi-automatic weapons which are responsible for at least 65 out of 81 mass shootings since 1982.

So I'm not going to suggest that a mass shooting of 11 police officers will move them to end the slaughter either. They'll just say the police need more and better guns. That's their answer for everything. And we'll all adjust and go on until the next one and the one after that. I have no idea what it will take to break this cycle.