Iraqi oil production skyrocketed since illegal 2003 US invasion, in accordance with plans outlined by US officials 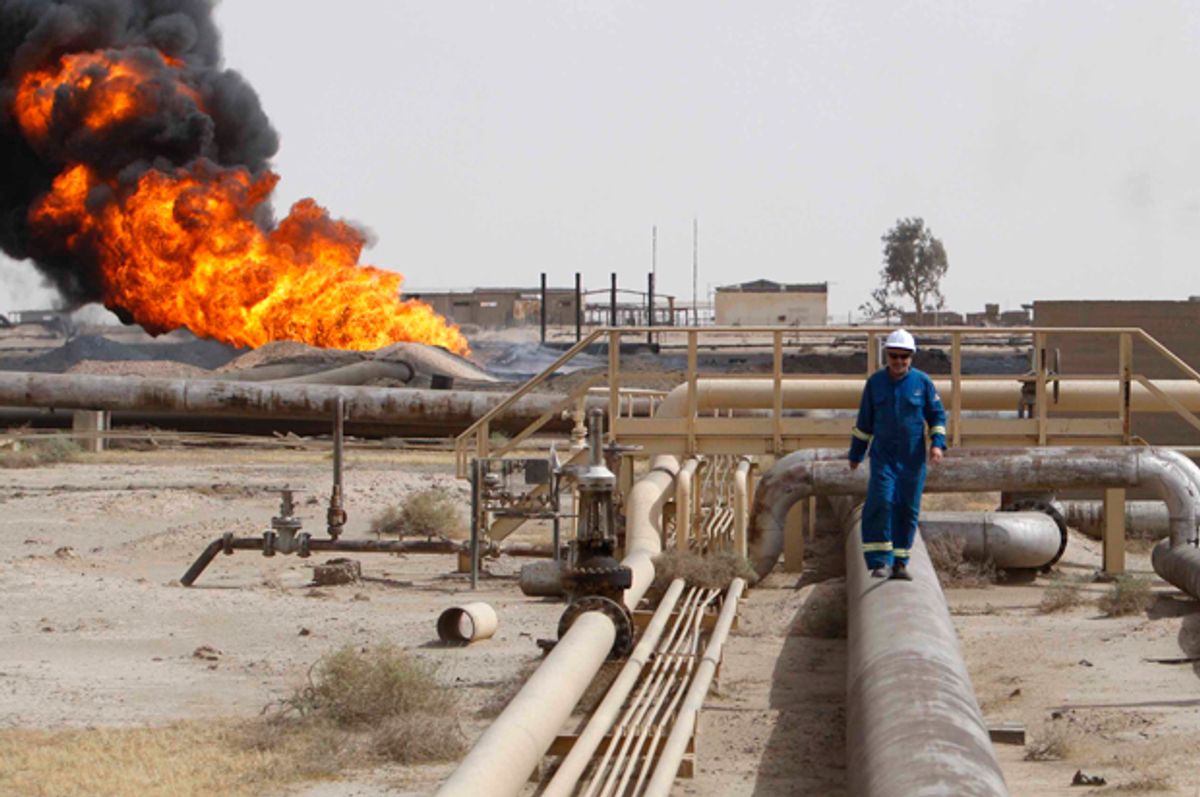 A 2011 email to then-Secretary of State Hillary Clinton shows how the U.S. pressured Iraq's new allied government to increase oil production in order "to pay the greatest dividends."

U.S. State Department officials stressed that "Iraq is potentially one of the largest oil producers in the world," but lamented that it was not meeting its full potential.

In the email, which was released by the State Department in response to a Freedom of Information Act request, they outline plans “to help move the country in the right direction” — that is to say, to increase Iraq’s oil production by at least 150 percent in the next five years, with the help of “oil contracts with international companies.”

Less than five years later, the U.S. had exceeded its goal, with Iraqi oil production up 175 percent.

Since the illegal U.S. invasion in 2003, Iraq's oil production has skyrocketed, while domestic consumption has only slightly increased.

According to the U.S. Energy Information Administration, the rise of the genocidal extremist group ISIS has barely affected oil exports. The message details the U.S. strategy to pressure the Iraqi government to boost its oil production.

"Given recent discussions of Iraq and oil [redacted] we would like to update you on the steps we are taking on this issue," the State Department envoys told Secretary Clinton.

They said the U.S. embassy in Baghdad, the Bureau of Near Eastern Affairs, the Bureau of Energy Resources and the office of the special envoy for Eurasian energy would join forces, "bringing together one State team to work these issues."

This team, they added, would "analyze the principal constraints on expanding Iraq's oil output and develop a set of targets to help move the country in the right direction."

"We will craft a diplomatic strategy to keep Iraqi policymakers consistently focused on the projects and initiatives most likely to pay the greatest dividends," the State Department envoys continued.

They stressed, "Iraq is potentially one of the largest oil producers in the world, but one where production has consistently underperformed expectations and significant challenges remain."

There was a problem, however. The U.S. singled out "lack of export infrastructure" as "the principle impediment to short-term growth in Iraqi oil exports."

"Our goal, with the embassy, is to try to keep Iraq on the critical path of bringing new infrastructure on line while addressing the list of commercial and policy issues that constrain production and exports," the State Department envoys wrote.

Thus far, this strategy had been successful. In the past two years, the 2011 message noted, oil production had already increased, thanks to "oil contracts with international companies signed in 2009." But it was not enough.

Iraq had to take numerous steps to get there, however, the U.S. officials added. "By tracking each step and engaging Iraq to stay on this path, we stand the best chance to use our diplomatic capital and commercial leverage most effectively," they wrote.

By early 2016, less than five years later, the U.S. had surpassed its goal. In March, Iraq's crude oil output had risen to 4.55 million barrels per day.

Multinational corporations including BP and Lukoil are "boosting production at fields they operate in the south of the country," Bloomberg reported.

Since the 2003 U.S. invasion, Iraq has become the second-largest crude oil producer in the Organization of the Petroleum Exporting Countries, or OPEC, following Saudi Arabia.

According to the U.S. Energy Information Administration, Iraq's oil production averaged nearly 4.1 million barrels per day in 2015, the U.S. government's five-year goal one year early. This was an increase by 700,000 barrels per day from 2014. Of those 4.1 million, Iraq was exporting an average of 3.3 million billion barrels per day in 2015, according to EIA figures.

Asia — primarily India, China and South Korea — is the main destination, importing slightly more than half of Iraq's total exports in 2015.

Outside of Asia, the U.S. is the largest importer of Iraq's crude oil. And Europe collectively imports another roughly one-quarter of Iraq's oil.

Oil production in Iraq has grown drastically since the U.S.-led invasion, which the U.N. explicitly said was illegal. In 2003, Iraq was producing just around 1.3 million barrels per day.

Before the U.S. invasion, Iraqi oil production had drastically fluctuated.

In 1990, the United Nations Security Council, under pressure by the U.S., imposed one of the harshest sanctions regimes in history on Iraq, in order to punish dictator Saddam Hussein — whom the U.S. had backed throughout the Iran-Iraq War in the 1980s — for his invasion of Kuwait. This halted oil exports.

A U.N. report found that, from 1991 to late 1995, as many as 576,000 Iraqi children died because of the sanctions, which the Bill Clinton administration staunchly supported. (U.N. Humanitarian Coordinator in Iraq Denis Halliday would go on to resign in 1998, after 34 years of work at the U.N., in protest of the sanctions, saying they amounted to “genocide” in Iraq.)

In response, President Clinton introduced the Oil-for-Food Program in 1995, which allowed Iraq to sell its oil in return for food and medicine that had not been available to the Iraqi people. Oil production in this period peaked at around 2.5 million barrels per day.

From 2003 on, after the sanctions were lifted, oil production in Iraq skyrocketed to historic levels, throughout the U.S. military occupation and beyond.

Nearly 85 percent of the oil produced in Iraq in 2015 was in the southern part of the country. Basra, the largest city in the south, has been described as "Iraq's oil boomtown."

The U.S. EIA said it expects the growth in Iraq's oil production to slow in 2016 because of government budget constraints.

The agency noted that attacks by the extremist group ISIS have not significantly affected oil exports. In 2014, ISIS seized large swaths of the country, including the major city Mosul.

Oil production and refinery operations in northern Iraq (excluding the Iraqi Kurdistan region) were affected by ISIS, the U.S. EIA said. But ISIS did not impact production and exports in the south, where roughly 95 percent of Iraq's total crude oil exports came from in 2014.

Former British Prime Minister Tony Blair has admitted that the Iraq War led to the rise of the brutal extremist group ISIS.

More than 1 million Iraqis died in the Iraq War, according to a study authored by the Nobel Prize-winning medical organization International Physicians for the Prevention of Nuclear War. “And this is only a conservative estimate,” the report notes.

Despite the ongoing battle against the genocidal self-declared Islamic State, the U.S. government's goals for increased oil production in Iraq have been more than fulfilled.

The email to Sec. Clinton shows that, while oil was certainly not the only factor behind the invasion of Iraq, it was a top priority for the U.S. government.

Anti-war protesters frequently accused the U.S. and its allies in the U.K. and elsewhere of spilling blood for control of natural resources. "No blood for oil" was one of the most popular chants in protests against the war.

Critics described oil as a symbol of the U.S.-led "neo-liberal putsch, made in the name of globalisation and free-market democracy," of an invasion that stands as "the prototype of a new form of military neo-liberalism."

It was in response to these criticisms, in fact, that the Bush administration stopped referring to its mission as Operation Iraqi Liberation, or OIL.

In a briefing just four days after the beginning of the invasion, on March 24, 2003, White House Press Secretary Ari Fleischer spoke of "Operation Iraqi Liberation." A week later, in the April 1 press briefing, Fleischer again used the name.

Sometime after this point, it appears that Bush administration officials realized the acronym might not look good, and began using a new name: Operation Iraqi Freedom.

While the above email outlining this strategy shows how the U.S. has economically benefited from Iraq's natural resources, another message to then-Sec. Clinton shows how U.S. officials did not think very highly of the Iraqi people. In a November 2009 email released by the State Department, U.S. Ambassador in Iraq Chris Hill thanked Clinton for a previous message, before expressing frustration with the entire Iraqi population.

"I wish I felt better about Iraqis as a result, but I truly remain worried about these people," Amb. Hill wrote. "They are truly a collective pain in the neck."