The GOP's show trials: Grilling James Comey begins the next phase of an unending scheme to break Hillary

No matter how long the GOP drags it out, this latest round of scandal-mongering will likely come up empty, too 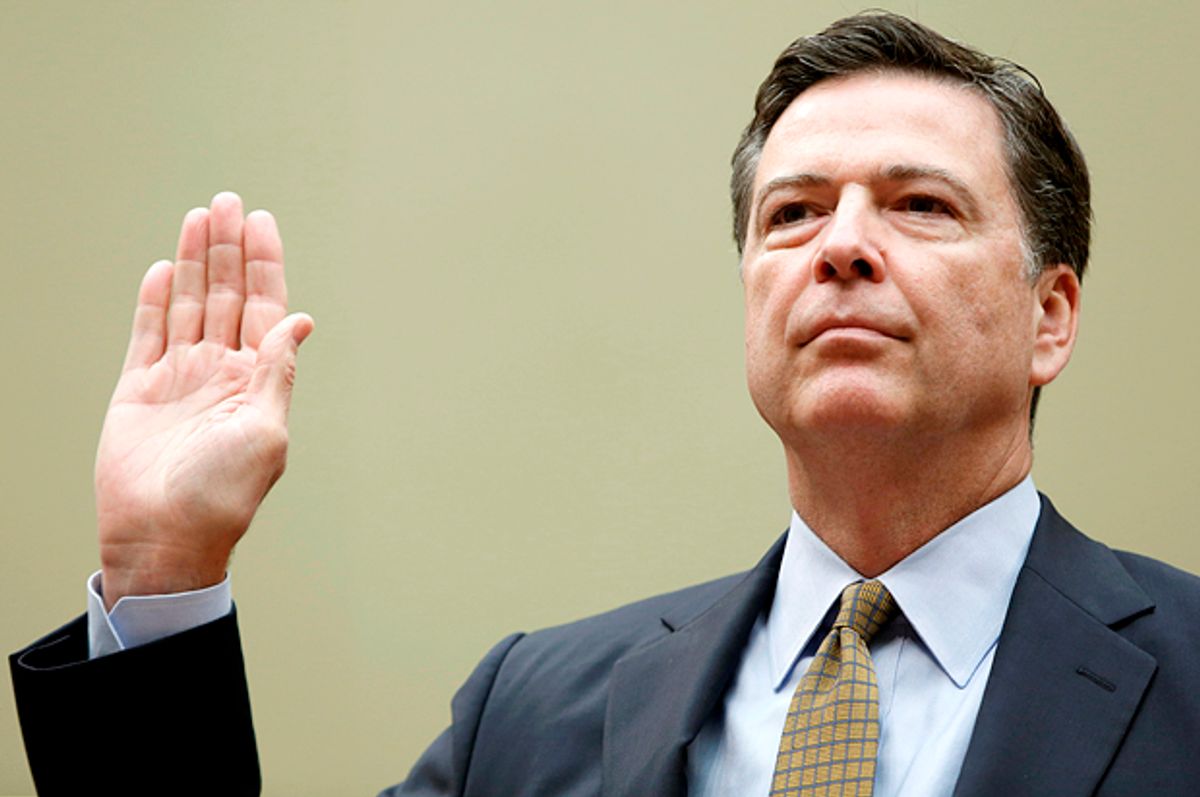 When FBI Director James Comey announced Tuesday that his agency would not recommend the Justice Department file charges against Hillary Clinton over her use of a private email server, he nonetheless handed her opponents several golden clubs they could use to bludgeon her campaign for the next four months.

Despite the FBI’s findings, Comey made it clear that he felt Clinton had been “extremely careless” in her handling of the sensitive materials she and her aides emailed back and forth to each other, and seemed to imply that, while her actions may not have risen to the level of criminality, they might still merit administrative consequences.

The director spoke for 15 minutes Tuesday, and by my estimation a good 12 of them had ready-made quotes and clips for attack ads that could run around the clock from now until November. Of course, Hillary’s opponents, particularly the bigoted sweet potato Donald Trump, booted the opportunity.

Trump has spent the last three days finding creative defenses of his campaign’s use of anti-Semitic imagery in a web ad, praising Sadaam Hussein’s apparently underappreciated skill at being a lawless dictator, and insulting congressional Republicans in a meeting intended to foster party unity ahead of the convention. The best any of them could say afterwards was that Trump is making progress as a candidate, as if he’s a toddler going through toilet training.

All of these unforced errors distracted the press from what should have been a terrible week for Clinton. And it has some Republicans grumbling, upset that their candidate is so brutally incompetent at taking advantage of the opportunity handed to him this week. But why should they expect basic campaigning competency from Trump, when everything they have done to take advantage of the FBI report this week also reeks of snatching defeat from the jaws of victory?

Overreach is nothing new when it comes to the eternal Republican search for the Holy Grail of Clintonian criminality, that one mistake Bill or Hillary made that will finally result in a perp walk through the front door of the nearest federal prison. So why not pursue Hillary over her emails? Millionth time could be the charm.

They just can’t help themselves. It was only last week that the GOP was forced to admit that its eighth – and by far longest and most expensive – investigation of the 2012 attack on America’s consulate in Benghazi had not turned up evidence of venality or rank incompetence on the part of then-Secretary of State Clinton. That the investigation was highlighted by an eleven-hour grilling of Clinton in front of Rep. Trey Gowdy and his special committee that only succeeded in making the grillers look like conspiracy theorists suffering from acute sunstroke seems to have made no impression on the GOP.

So after Comey’s Tuesday announcement, congressional Republicans immediately scheduled hearings to investigate the email investigation. Rep. Jason Chaffetz took all of 48 hours to drag Comey in front of the House Oversight Committee so that the Breitbart comment threads masquerading as Republican members could double-check to make sure the former Deputy Attorney General had not been sick the day he was supposed to be studying law at law school, at least as they imagine the law to be in their heads.

This will soon be followed by Attorney General Loretta Lynch, who Republicans seem convinced must have been bribed somehow by Bill Clinton during the impromptu meeting the two had when they crossed paths at the Phoenix airport last week. In fact, as of Thursday, no fewer than five Republican-led congressional committees had plans to question Comey, Lynch and various other law-enforcement officials about how they conducted their investigation.

In addition, Chaffetz told Comey to expect an official request from Congress for the FBI to investigate whether Clinton lied to Congress about the email server when she answered questions about it in front of the Benghazi committee last fall. All of this will drag on through the election and well into Hillary Clinton’s presidential administration, assuming she wins in November.

This climate of jumping at shadows is reminiscent of the snipe hunts the GOP engaged in all through Bill Clinton’s presidency, when every investigation Republicans were sure would lead to something nefarious – Whitewater, cattle futures, Vince Foster, Rose Law Firm billing records – resulted in a big fat zero on the scoreboard and seemed to make Bill Clinton more popular.

This latest round of scandal-mongering will likely end up in a similar place, no matter how long the GOP drags it out. While continuous investigations of the Clintons might be okay with the base (which won’t turn on the party so long as the party blames the mainstream media for protecting the Clintons instead of itself for its members’ failures, or worse, refuses to admit there was nothing to investigate in the first place), history suggests that the majority of the public doesn’t have the time or patience to follow Republicans down every rabbit hole they can conjure from the dark recesses of their imaginations.

The problem is that at some point, the GOP crawled so deep into the swamp of conspiracies and fever dreams that, like Ahab or Percy Fawcett, it can’t conceive of any direction to move except forward. And the party won’t pay enough of a price at the ballot box for all this obstructionism. So as long as their constituents keep sending them back to Congress, we can expect a never-ending parade of show trials turning up bupkis. What the heck, it’s easier than working for a living.