The vicious dialectic of violence and retaliation: A plea for dialogue and peace after Dallas

We can't bring back the dead, the best we can do right now is peacefully push for change 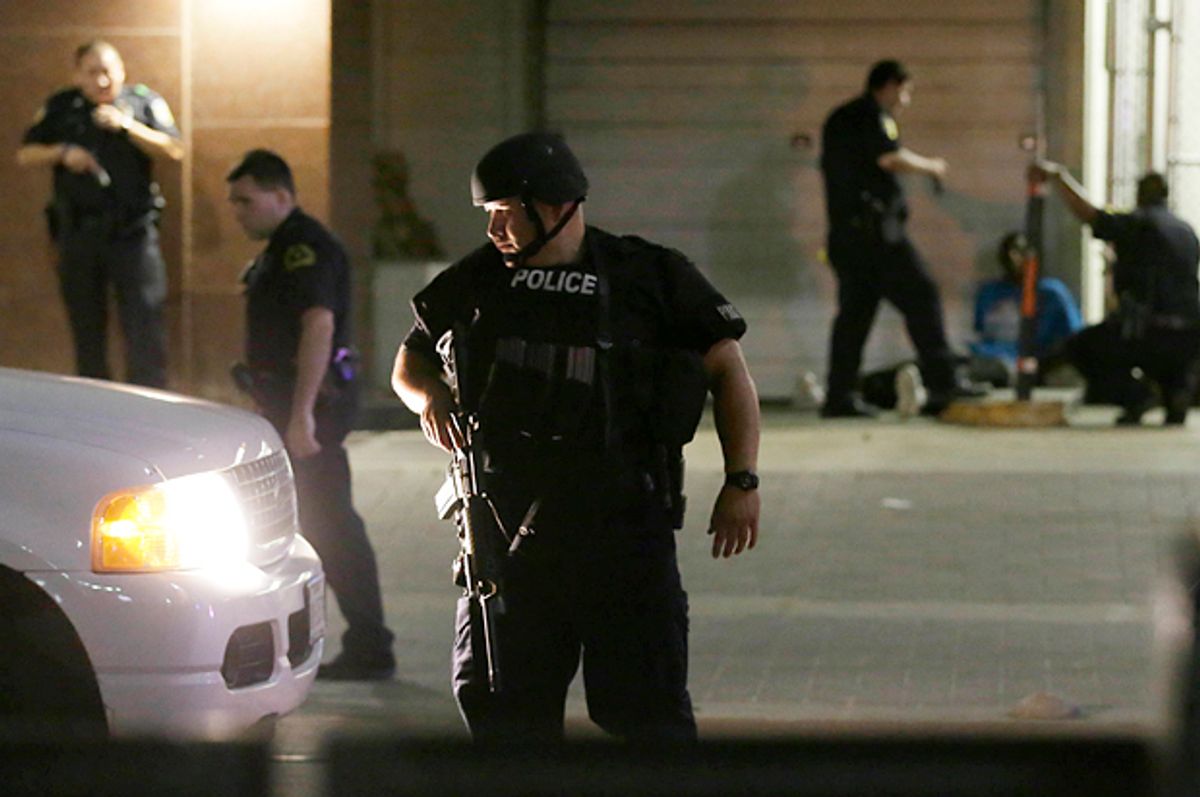 Five Dallas police offers were killed Thursday night, another seven were badly wounded. It appears one man armed with a rifle ambushed the officers following a peaceful demonstration in downtown Dallas. The motives of the murderer are murky at this point. We know only that he was “upset about Black Lives Matter” and “wanted to kill white people, especially white officers,” according to Dallas Police Chief David Brown. The gunman has been identified as Micah Xavier Johnson, a 25-year-old Army reservist from Dallas. Johnson was killed in a stand-off with authorities shortly after the shooting.

What happened last night in Dallas was tragic. It wasn't an act of protest or rebellion. It was a savage provocation designed to explode any hope of reasonable discourse.

Now that innocent cops have been slaughtered on the street, there is injustice on all sides. Both the black community and the law enforcement community have suffered. Righteous rage simmers in each camp. Anyone inherently suspicious of the Black Lives Matter movement will reflexively denounce it after this incident, even though the two aren't causally related and Johnson himself insisted he wasn't affiliated with any groups. White America, desperate to paper over our nation's sins, will dismiss police brutality as a fiction and blind itself to the realities of our criminal justice system.

As the rhetoric intensifies, the original injustices are reduced to afterthoughts. It's forgotten that black Americans are – and have been – the victims of state-sanctioned tyranny, that they're 30 percent more likely to be stopped by police, that they're arrested and shot at twice the rate of whites, that they're charged and sentenced more often and more harshly than white Americans. These facts fade from public consciousness as violence escalates and the factions entrench. The pendulum swings to and fro and, eventually, the just cause at the root of it all is eclipsed by the immediate pain of the last retaliatory act.

Albert Camus, the French philosopher and writer, lamented this dialectic in his plea to an imagined Algerian militant in 1955, shortly after 100 Europeans were massacred at Philippeville by The National Liberation Front (FLN). The Algerians were fighting a just battle for their independence from colonial France at the time, but Camus begged both sides to break the cycle of violence without limits. He wrote:

“The struggle has taken on an implacable character that arouses on both sides irrepressible race and passions that can be slaked only by escalation. 'No further discussion is possible.' This is the attitude that kills any chance of a future and makes life impossible. What follows is blind struggle...Steeped in bitterness and hatred, each side finds it impossible to listen to the other. Every proposal, no matter what its nature, is greeted with suspicion and immediately twisted into a form that renders it useless. Little by little we become caught in a web of old and new accusations, acts of vengeance, and endless bitterness...It becomes difficult to imagine how such an affair can end.”

Obviously, the conflict between Algeria and France was very different from the present divide between law enforcement and the black community, but the logic of Camus's appeal holds all the same. Every act of injustice, every violent volley, entrenches each side and blocks the way to dialogue. This is true of any dispute in which both sides have reasons for their rage. And that's not to draw equivalencies here. Let's be clear: the people protesting police brutality occupy the moral high ground. Black men have been murdered by agents of the state for hundreds of years, and that is what this is about. But not all cops are bad, and the violence done in Dallas was unjust. Nothing in our nation's sordid history justifies it.

Apart from the loss of life, the most depressing fact about this mass shooting is that it followed a peaceful protest. The man who did this does not represent black Americans or the broader Black Lives Matter movement. But those invested in the prevailing system of oppression will insist otherwise, and people of goodwill have to be ready for that.

Yesterday's massacre will animate agitators on both sides. The people disposed to blindly support the police will pounce. They'll deny any distinction between the shooters and the nonviolent protesters. They'll try to discredit the very real and very legitimate grievances of the movement. Like former Republican congressman Joe Walsh, they'll hurl gasoline on the fire.

In a string of unhinged tweets following the shooting, Walsh blamed Obama and the Black Lives Matter movement for the cop killings. “3 Dallas Cops killed, 7 wounded,” he wrote. “This is now war. Watch out Obama. Watch out black lives matter punks. Real America is coming after you.” There is too much ignorance to unpack there, but the point is clear enough: The purveyors of hate will make this a race war, a conflict between “real America” and black America. But this is a false and dangerous distinction, which has to be rejected at every turn.

The people on the side of justice have to be better than the agitators. They have to be more courageous. It's an easy thing to do, stoking the flames. It's much harder to refuse the bait, to remain committed to peace and dialogue. We have to avoid the trap of either-or logic. If this conversation is reduced to zero-sum terms, everyone loses. One can support law enforcement and equal rights and treatment under the law at the same time.

It's worth remembering that there is no such thing as perfect justice. There are people and institutions, and the process is as good as they are. The problems in law enforcement and our criminal justice system are deep and complicated. It has to be reformed, and the way to change is through mass mobilization and nonviolent protest. The totalizing attitudes of violent extremists are a plague on the process.

We can't bring back the dead, and the grieving families (of young black men and police officers) can't be made whole again. The best we can do is peacefully push for change. More death and suffering isn't the answer. The overwhelming majority of activists understand this. But the reactionaries on the right will now seek to escalate and any response that lends credence to their false narrative will destroy any chance of progress.

This has to be about achieving a goal, namely reform. The question then is simple: What's more likely to produce that outcome, a fragmented populace committed to violence or a mobilized one devoted to strategic nonviolence? The data is clear on this question, but the larger point is that moments like this are when solidarity and compassion are most needed.

Otherwise, we risk adding to the infernal dialectic of violence and retaliation.

Editor's note: This story has been updated to reflect the new information regarding the number of shooters. According to the latest reports, there was only one shooter, not four.