Trump's populist lie: Republicans are denouncing him, average working Americans are fooled by him

The real Trump isn’t a populist. He’s a plutocrat and, above all, a con man 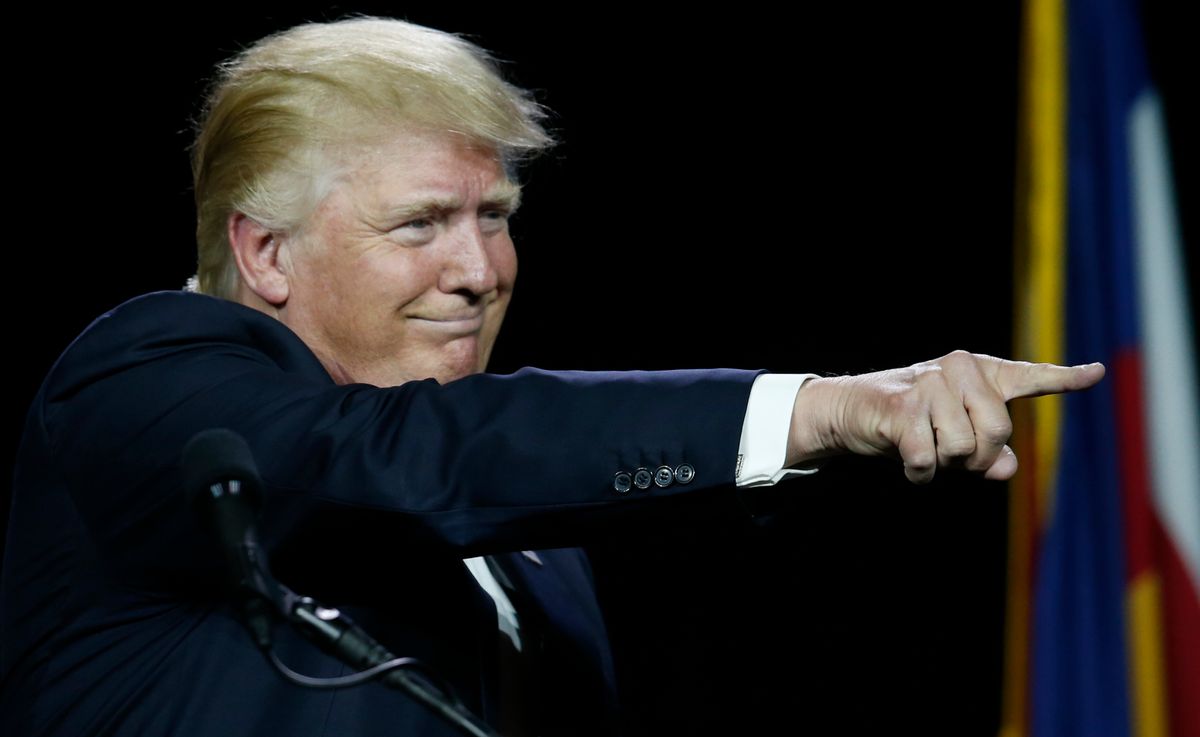 Republican presidential candidate Donald Trump points to supporters during the opening session of the Western Conservative Summit, Friday, July 1, 2016, in Denver. The summit, which brings together Republicans from across the West, runs through Sunday. (AP Photo/David Zalubowski)
--

The tectonic plates of American politics are no longer moving along the old fault lines of “left” versus “right” or even Democrat versus Republican.

As we’ve seen this bizarre political year, the biggest force welling up is rage against insider elites in both parties and against the American establishment as a whole — including the denizens of Wall Street, large corporations and the mainstream media.

Trump is even more of an establishment figure than Hillary Clinton — inheriting a fortune from his father, spending years bribing politicians to subsidize his hotels and casinos, and repeatedly using bankruptcy to shield his money while leaving creditors and workers holding the bag.

But Trump is also a brilliant huckster who knows his mark.

“Bernie Sanders and I are in complete accord [on] trade,“ Trump said last week in Ohio. ”[Sanders] said we’re being ripped off and I say we're being ripped off. I’ve been saying it for years, he’s been saying it for years. I think I am saying it even louder …. Globalization has made the financial elite who donate to politicians very wealthy. But it has left millions of our workers with nothing but poverty and heartache.”

By putting opposition to trade at the center of his economic agenda, Trump gets a twofer — landing blows against big American corporations and Wall Street, and also against the Clintons (he traces America’s economic problems to the North American Free Trade Agreement that Bill Clinton signed in 1993 and the entry of China into the World Trade Organization, which Bill Clinton supported, and says Hillary “voted for virtually every trade agreement.”)

It’s pure demagoguery. Trade isn’t to blame for the declining wages and job security of most Americans.

The real problem has been the unwillingness of the biggest beneficiaries of trade (and also of job-displacing technologies) to share the gains with the rest of America — whether through larger wage subsidies, stronger safety nets, better schools and easier access to higher education. Trump’s Republican Party has been the main culprit.

Trump vows to cancel the pending Trans Pacific Partnership — “another disaster done and pushed by special interests who want to rape our country” — which Hillary Clinton praised in 2012 as “set[ting] the gold standard in trade agreements,” and then reversed herself after Sanders came out strongly against it.

Too bad Clinton delegates on the Democratic Party’s platform committee muddied the waters last week by voting down a proposal by Sanders delegates to put the party on record as opposing the TPP, noting instead that “there are a diversity of views in the party” on this matter.

The central problem with the TPP is that it would penalize member nations for raising health, safety, environmental and labor standards. But this aspect of the TPP doesn’t trouble Trump, who calls America “over-regulated.”

Trump’s faux populism extends to “powerful corporations, media elites and powerful dynasties,” who, he said last week in Pennsylvania, have “rigged the system for their benefit, [and] will do anything and say anything to keep things exactly as they are."

Unwittingly, the GOP establishment seems intent on proving Trump’s point. Mitt Romney condemns him; conservative media pundit George Will is deserting the Republican Party because of him; big business groups like the U.S. Chamber of Commerce and the National Association of Manufacturers blast him; Republican mega-donors like Paul Singer rebuke him; and Wall Street Republicans like former Goldman Sachs CEO and Bush Treasury Secretary Hank Paulson (who initiated the Wall Street bailout) announce they’re voting for Hillary Clinton.

"It’s almost – in some ways, like, I’m running against two parties,” Trump crowed recently. “The people who rigged the system are supporting Hillary Clinton.”

It’s all an act. The real Trump thinks U.S. wages are too high, and has fought against the unionization of his hotel employees.

His businesses outsource abroad like mad. Most of the suits, ties and cuff links he peddles are made in China; his luxury line of furniture comes from Turkey; the crystal for his Trump Home line is produced in Slovenia.

And the real Trump is on the side of the super wealthy. He proposes to cut taxes on the rich from 39.6 percent to 25 percent and reduce taxes on all business income to 15 percent (thereby slashing the top tax rate of hedge fund and private-equity managers from the current 23.8 percent to 15 percent).

The real Trump isn’t a populist. He’s a plutocrat. Above all, he’s a con man. And the people being conned are average working Americans who are buying Trump’s ruse of being a man of the people.