Don't be fooled: Trump's populist economic rhetoric is a fraud 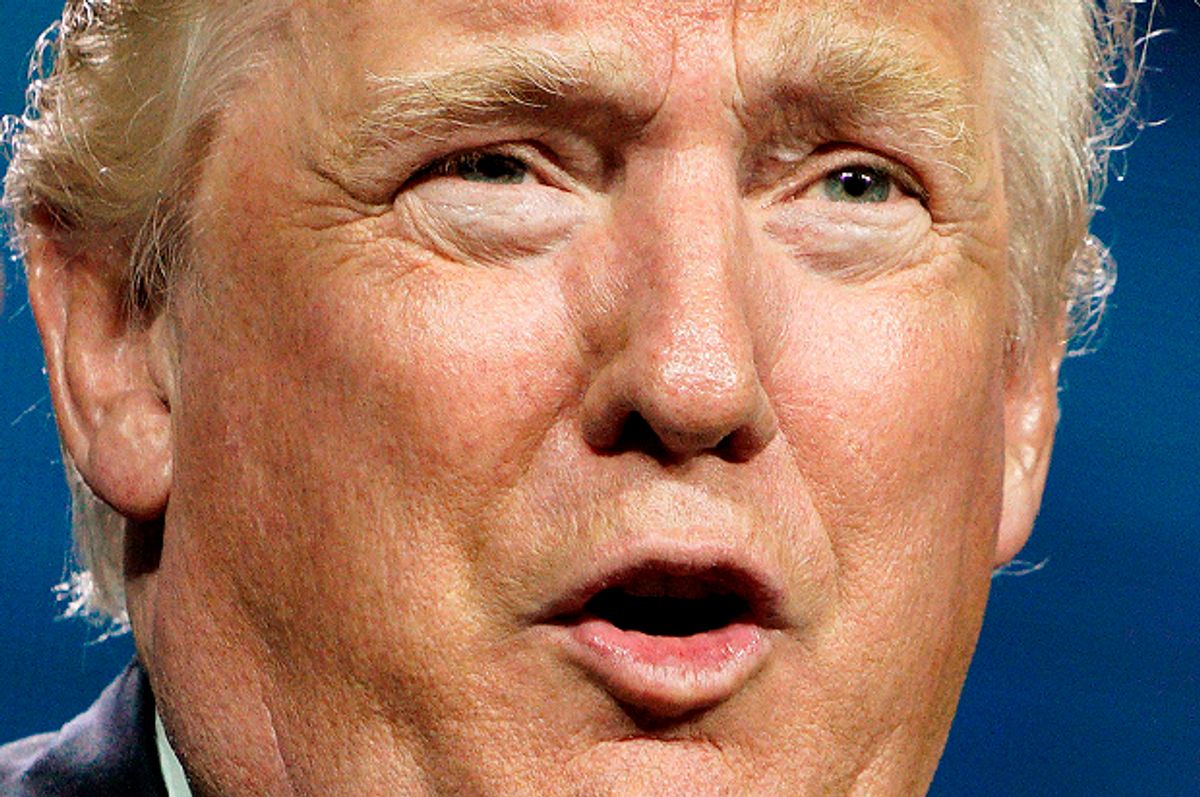 You know that you are in a brave new world when the presumptive Republican nominee for president calls on the people to “declare independence from the elites who've led us to one financial and foreign policy disaster after another” and “reject the campaign of fear and intimidation being pursued by powerful corporations, media elites, and political dynasties.”

Those are not the words of some fringe lefty from the Green Party, but of the billionaire plutocrat and presidential candidate Donald Trump. The words of a man who has been a wealthy elite his entire life, who has profited enormously from the system he now derides, who admittedly tried to bribe politicians and who separated working-class people from their money with a scam called Trump University. Donald seems to be the last person on earth with any kind of moral authority on the issues of economic inequality and political corruption — but of course, the billionaire has supposedly changed his ways:

“Globalization has made the financial elite who donate to politicians very, very, wealthy,” said Trump in the same economic speech given last week in Pennsylvania. “I used to be one of them. Hate to say it, but I used to be one. But it has left millions of our workers with nothing but poverty and heartache.”

Trump went on to claim that “the people who rigged the system are supporting Hillary Clinton because they know as long as she is in charge nothing will ever change. The inner cities will remain poor. The factories will remain closed. The borders will remain open. The special interests will remain firmly in control.”

It’s hard to disagree with much of anything that Trump says above. The economy is indeed rigged, our political system is corrupt, and Hillary Clinton is the financial and global elite’s favored candidate (which is partly due to Trump being an unhinged and unpredictable demagogue — if someone like Jeb Bush was the GOP candidate, he would undoubtedly be favored by the plutocracy, but Clinton’s neoliberal centrism is certainly satisfactory to them).

Of course, one’s diagnosis is less revealing than one’s offered solutions — and Trump’s solutions are, for the most part, either counterproductive or downright harmful to the people whose interests he claims to defend. Consider his most detailed policy proposal: tax reform. All you really need to know about his tax plan is that the anti-tax extremist Grover Norquist endorsed it — but it is worth exploring to see how insincere Donald’s economic rhetoric actually is.

According to an analysis by the Center on Budget and Policy Priorities, Trump’s tax plan (alongside his promise to balance the budget) would “benefit households making over $1 million to an unprecedented degree, and do so almost certainly at the expense of low- and middle-income people — with programs important to the well-being of many or most Americans shrinking markedly or disappearing altogether” (the report finds that households with incomes over $1 million — who make up less than 1 percent of the population — would receive 38 percent of Trump’s tax cuts in 2025).

In reality, of course, Trump wouldn’t balance the budget. “Starving the beast” didn’t work under Reagan, and it certainly won’t work under a President Trump (besides, the billionaire doesn’t even pretend to be a small-government conservative like the Gipper). Indeed, according to various studies, his tax plan would reduce government revenue (and thus increase the deficit without major spending cuts that would disproportionately hurt working people) by nearly $10 trillion over a decade.

Further exposing Trump as a populist fraud is his desire to dismantle economic regulations like the Dodd-Frank legislation, which passed shortly after the 2008 financial crisis. Though far from perfect, Dodd-Frank was a step in the right direction — and if someone genuinely wanted to combat the financial and global elite, he or she would favor expanding and strengthening regulatory oversight (as does Sen. Bernie Sanders and even Hillary Clinton, though to a lesser extent), not dismantling it. Anyone with a rudimentary understanding of the financial crisis knows that the sweeping financial deregulation enacted during the Reagan, Clinton and Bush years led to fraudulent and speculative practices that ultimately crashed the economy, while simultaneously leading to too-big-to-fail banks.

Not surprisingly, Trump also supports throwing out environmental regulations — any why not, global warming was, after all, “created by and for the Chinese in order to make U.S. manufacturing non-competitive,” according to Trump.

Ultimately, Trump is selling a kind of isolationist economic nationalism, which complements his politics of scapegoating foreigners, immigrants and minorities. And while he hasn’t suggested making America a full-blown autarky — the old fascist ideal — he may be the most anti-globalist mainstream politician since the isolationism of the 1920s and ’30s. This makes him fundamentally reactionary (along with his white-identity politics, of course).

True progressives are internationalist, and thus would never dream of supporting someone like Trump. Of course, this doesn’t mean that progressives should defend the global capitalist order that Trump denounced in his speech; but it does mean fighting for the good of all humanity and championing an international establishment that promotes human rights as well as egalitarian and democratic values. It means reforming global institutions and replacing neoliberalism with a progressive social democratic order — not burning down the organizations and dissolving the political unions that our forebears established after the untold horrors of the first half of the 20th century — horrors that emerged from hyper-nationalism and paranoid bigotry (sound familiar?).

Trump obviously believes that his best shot at defeating Clinton is to paint her as a puppet for the global financial and corporate elite — which is not a very difficult thing to do considering her secretive and less-than-scrupulous history (Clinton presumably thought her Republican opponent would be even more tainted by big money than her). But when evaluating the various candidates, there can be no doubt that Trump is a populist fraud whose economic policies would ultimately end up serving plutocrats like himself.