"I don’t even think J. Edgar Hoover ever did this": DOJ veterans weigh in on FBI Director James Comey's handling of Clinton email probe 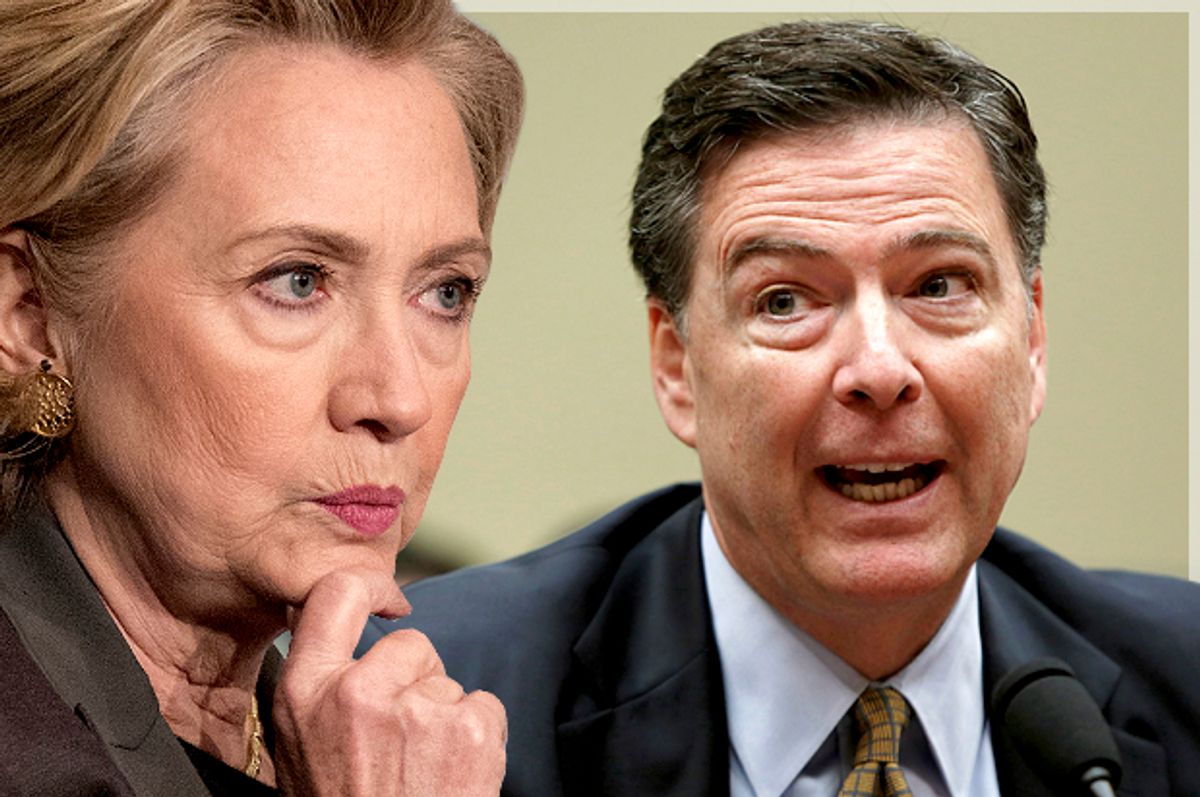 When FBI Director James Comey took the podium at the J. Edgar Hoover Building on Tuesday to address the FBI's investigation into Hillary Clinton's use of a private email system during her time as secretary of state, he acknowledged at the outset that his remarks would be unusual.

"I am going to include more detail about our process than I ordinarily would, because I think the American people deserve those details in a case of intense public interest," Comey explained, stressing that he had not coordinated with the Department of Justice or any other government agency before delivering his statement.

Comey proceeded to announce that the FBI would not recommend charges against Clinton, but not before providing a detailed account of the investigation, during which Comey was sharply critical of Clinton and her team, calling their actions "extremely careless."

"Although there is evidence of potential violations of the statutes regarding the handling of classified information, our judgment is that no reasonable prosecutor would bring such a case," Comey said.

Comey emphasized that the FBI's work had not been affected by the highly politicized atmosphere surrounding the Clinton email flap, which was heightened further last week by Attorney General Loretta Lynch's controversial meeting with Bill Clinton and subsequent announcement that she would accept whatever recommendations federal prosecutors and the FBI made regarding whether to bring charges stemming from the investigation.

"What I can assure the American people is that this investigation was done competently, honestly, and independently," Comey said. "No outside influence of any kind was brought to bear."

Former Justice Department officials agree that Comey's decision to publicly opine on the facts of a case in which the FBI did not recommend a prosecution was highly unusual.

"I do not recall a time when the F.B.I. has made a statement like this involving a case," said Booth Goodwin, a former U.S. attorney and Democrat who expressed his "utmost respect" for Comey.

According to Nick Akerman, a former federal prosecutor who also served as an assistant special prosecutor with the Watergate Special Prosecution Force, Comey overstepped the bounds of his office with his statement.

"What was so unusual and what was beyond the pale here was that the director of the FBI got up and basically announced the decision, which is never done by the FBI," Akerman said. "I don’t even think J. Edgar Hoover ever did this."

Matthew Miller, who served as DOJ spokesman under former Attorney General Eric Holder, took issue with many aspects of Comey's speech, including the FBI director's assertion that "no reasonable prosecutor" would bring charges against Clinton.

"I think it’s very unlikely that those career prosecutors would have come to a different conclusion," Miller said. "But they deserve the right to make that decision privately without him announcing publicly what he thought they ought to do."

“For Comey to stand up and draw conclusions publicly from the investigation really is outside the bounds of what the FBI is supposed to do," said Miller.

However, former U.S. Attorney Michael D. McKay said he agrees with Comey's assessment that the exceptional nature of the investigation warranted an unusual response.

"At the end of the day, Comey did the right thing. I think it was right for him to make the announcement, because — my god — it’s a presidential election and she’s about to be the Democratic nominee," said McKay, a Republican. "It’s the obligation of the government to make it clear. And he did — both the positives and the negatives: the positives being he’s not gonna press charges; the negative is she was 'exceedingly careless.'"

"I think it was a public service for him to make the announcement," McKay said. "It was unusual but not unprecedented. It was the right thing to do — both making the announcement and the final decision."