It's getting hot in Indianapolis: Corporate greed moves 2,100 more American jobs to Mexico

Despite soaring profits, Carrier cut loose union steelworkers in Indianapolis to save a blip on its spreadsheet 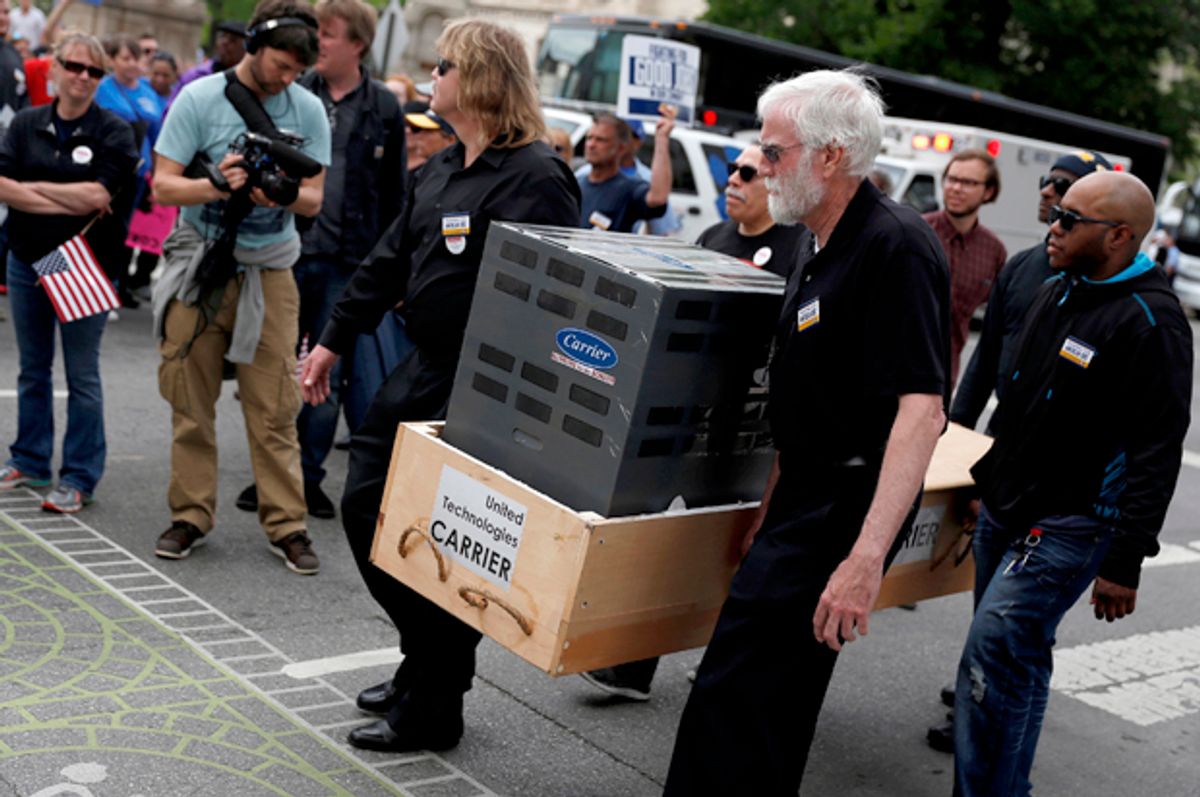 People protest against the outsourcing of jobs by Carrier at a rally in Indianapolis., April 29, 2016. (Reuters/Aaron P. Bernstein)
--

If the chieftains of industry and their political henchmen want to know what's roiling the riffraff, they could read Thomas Piketty's landmark, 1,000-page book on inequality: "Capital in the Twenty-First Century." Or, they could listen to one of Bernie Sanders' hour-long, tub-thumping speeches. Or, they could just spend three minutes and 32 seconds watching an online video showing a Carrier Corporation executive speaking to hundreds of workers in the air-conditioning giant's Indianapolis plant this past February.

The Steelworkers union members thought maybe they'd been called to the factory floor to hear about new orders for their quality products. After all, sales at parent company United Technologies were zooming -- expected to jump at least $2 billion to $58 billion in 2016.

Instead of receiving praise and good news, however, they got an ugly surprise. In the fuzzy video recorded on a worker's phone, UTC/Carrier honcho Chris Nelson doesn't bother with any opening pleasantries. He gets right to the point, reporting in the dry tones of a corporate lifer that the bosses have decided that, "The best way to stay competitive and protect the business for the long term is to move production from our facility in Indianapolis to Monterrey, Mexico." KABLOOEY! He couldn't finish his sentence, for the entire assembly exploded like a human cluster bomb, with cries of disbelief, raucous booing and a steady barrage of f-bombs.

"Please quiet down," the obtuse functionary instructed. But the devastated workers, realizing in an instant that Carrier was kicking their families right out of the middle class, got rowdier. Then, as though delivering a line from "The Godfather," Nelson assures the crowd that the corporation means nothing personal by taking their jobs: "This is strictly a business decision."

No, it wasn't. This was a calculated greed decision. Severing this workforce of 2,100 top-quality, experienced and dedicated producers makes questionable business sense: The move to Mexico is expected to save UTC only $70 million a year in labor costs (a blip on the spreadsheets of a global behemoth that hauls in $56 billion a year and has an uninterrupted 22-year record of increasing dividends).

But UTC's greedy Wall Street investment bankers demanded that the giant go on a cost-cutting binge aimed at generating a 17-percent hike in its stock price over the next two years. And what better way to please big institutional shareholders than to show a cold willingness to whack payroll. While making such cuts is "painful," mused Carrier's top financial executive, they are necessary for "shareholder value creation," adding cheerfully: "We feel very good about being able to execute on that." So a city must suffer factory abandonment, and workers must have their decent-paying jobs taken from them so some distant, don't-give-a-damn, rich shareholders can see a dollar rise in UTC's stock price. "Execute" seems like the right word.

There's also an unstated motivation in play: Gregory Hayes' pride. The UTC chief had taken heat from a board of directors concerned that the stock price had not climbed as high as fast as Wall Street wanted. Indeed, last year, the board sliced his executive bonus in half. "It's embarrassing," a financial analyst noted. "He got dinged." But no need to cry for Greg, since his 2015 paycheck still totaled $6 million. (A typical Carrier worker would have to stay on the job 150 years to earn that much).

Welcome to the new Wild Kingdom of Corporate World, where prideful executive royals are empowered to uproot the livelihoods of commoners in a ploy to please Wall Street, manipulate corporate stock prices, collect extravagant bonuses, and save face.

Notice that such whimsy was pulled off autocratically. Despite a unionized workforce, UTC/Carrier simply commanded the workers to assemble so they could be unilaterally dispatched -- there was no negotiation, consultation, or any other say-so by the workers, their community, public officials, or anyone else. This is our new norm of plutocratic rule, envisioned and implemented by the rampaging forces of corporate avarice.

This disregard for workers is not just a one-time Indiana problem. Carrier's chief financial officer blurted out to the New York Times that top executives are eyeing other factories to move to Mexico. Look out Charlotte, North Carolina, Collierville, Tennessee, and Tyler, Texas.

The carnage on working-class Americans won't stop until we actually start punishing these corporate malefactors.