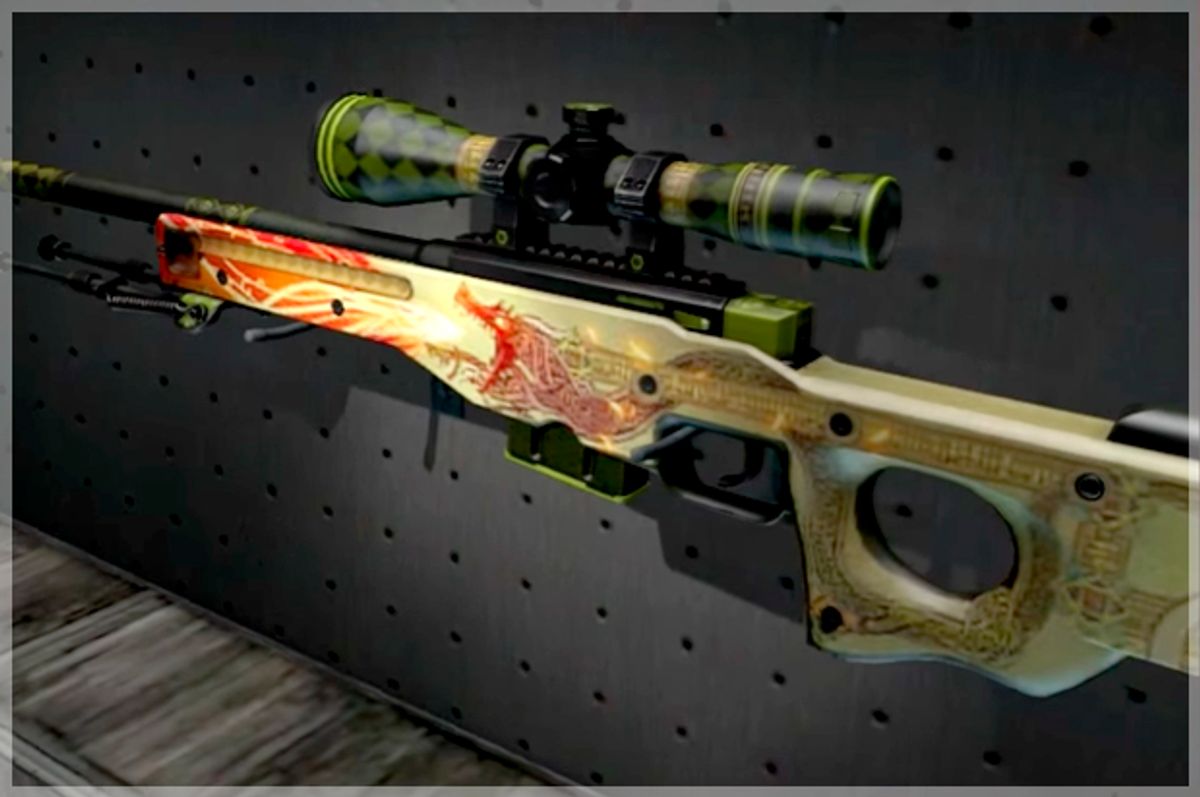 If you've never played Counter-Strike, you might not know what a weapon skin is. If you haven't used weapon skins, you likely don't know about the $2.3 billion gambling industry that's grown up around them.

And if you have no idea what any of these things are, you're going to have a rough time deciphering the strange weapon skin gambling scandal currently roiling the competitive video gaming world. But the unfolding drama raises big questions about the roach-like immortality of online betting, and its ability to draw in minors with parents' credit cards. No matter how regulators take action, it seems like there's always a new way to gamble.

Already, two Counter-Strike stars are being sued by a parent on behalf of her child, who claims they fostered an illegal online gambling scene marketed to minors. And that could just be the beginning.

The story starts, more or less, in 1998, when the new video game company Valve released its first game, Half-Life. The game was a huge hit with critics and gamers alike, and remains one of the most influential of all time. With such popularity came a community of modders: often-independent developers who used the core of Half-Life to build their own games.

Counter-Strike: Global Offensive (CS:GO), the latest in the series, didn't initially do very well after its release in 2012. For much of its first year, the 13-year-old and 9-year-old previous versions were each more popular than the new game. But a year after CS:GO's release, Valve introduced weapon skins, and it changed everything.

In 2016, Valve is not just a game publisher, but also the creator of Steam, the most popular service for buying, downloading, and playing computer games, and a requirement for playing CS:GO. The nice thing about owning the platform is that getting gamers to buy things in games with real money is pretty easy. After all, they already gave Steam their credit card numbers to buy the game in the first place.

It only takes a couple clicks to get from a game of CS:GO to buying what's known as a "crate," a $3 shot at finding a rare weapon skin. Like buying a pack of Pokemon cards or baseball cards in days of yore, this is already a low-level sort of gambling. You hope for a holographic charizard or a Dragon Lore AWP skin (currently valued at $1,300), but you're probably just getting a few magikarp or a 60 cent pistol skin. Steam also allows buying and selling of skins between members of its community (from which Steam takes a cut, of course), but it caps sale prices at $400, meaning the real money exchanges hands elsewhere.

Steam has faced criticism for this feature, especially due to the fact that anyone, including children, with access to a credit card or Paypal account can participate. The official minimum age for registering a Steam account is 13, but that limit is thwarted easily enough by entering whatever age the user wants to.

Weapon skins are simply paint jobs for the guns and knives in CS:GO. The normal guns in the game look like guns: gray, metallic, and that's about it. With custom skins, bright pink, green, blue, red, and orange are popular colors, and dragons, skulls, swirls, and gradients are dominant motifs. This results in the gritty, realistic terrorists looking like they raided an Ed Hardy laser tag arena for their weapons. To this untrained observer, there's no difference in beauty between a 60 cent skin and a $1,300 skin. That is, they seem equally ugly.  And to be clear, different skins do not affect the game in any way.

Skins provide status symbols in a game that isn't big on individuality. A rare skin is a sign of a dedicated player, and it provides an excellent visual identifier for the elite CS:GO players who participate in competitive matches for spectators, which itself is a major industry.

What skins really added was an easy way to gamble. Competitive matches helped turn skins from simple collectible items into a currency for gambling. Third-party sites appeared quickly, offering the ability to bet skins on games, turning them into a sort of currency. Top CS:GO teams make big money from gambling site sponsorships and the sale of stickers, another complex, lucrative virtual item that's outside the scope of this story. At least one CS:GO team was even discovered betting on their opponent and purposefully losing a match in order to win tens of thousands of dollars in skins, resulting in the players being banned by Valve.

From that first virtual casino emerged a secondary casino: rather than collecting bets on CS:GO games, many newer sites allow players to bet their skins on a virtual coin flip. Two or more players face off by putting all their skins in a (virtual) pile, the site sets odds based on how much value each participant put in, declares one of them the winner by chance, and gives the winner all the skins. This is the type of gambling provided by the site CSGO Lotto, which is now the center of a corruption scandal.

Two popular YouTubers in the CS:GO community, Trevor "TmarTn" Martin and Tom "ProSyndicate" Cassell, were exposed over the Fourth of July weekend as the owners of CSGO Lotto. This is significant because they have both released multiple YouTube videos promoting the site, with no disclosure that they have any connection to it.

In a now-private video, Martin, the president of CSGO Lotto, introduced the site like this: “We found this new site called CSGO Lotto, so I’ll link it down in the description if you guys want to check it out. We were betting on it today and I won a pot of like $69 or something like that, so it was a pretty small pot, but it was like the coolest feeling ever. I ended up following them on Twitter and stuff, and they hit me up and they’re talking to me about potentially doing like a skin sponsorship.” Other videos with titles like "HOW TO WIN $13,000" showed Martin and Cassell winning big on the site and also contained no disclaimer at the time.

The YouTube channel h3h3Productions built on work done by another YouTuber HonorTheCall to expose Martin and Cassell and explain the scandal in a well-researched video:

After his ownership of the site was revealed, Martin issued a non-apology on YouTube, insisting that it was "a matter of public record" that he owned the site, and that it should have been clear enough to his viewers. After the story broke, he appears to have gone back and edited the descriptions of his videos mentioning CSGO Lotto to add a disclaimer revealing his relationship to the site.

As this news was breaking, an unrelated YouTuber confessed in a video that a different gambling site, Steam Lotto, paid him to participate in and broadcast a rigged skin lottery for promotional purposes. His video revealed that this kind of rigging is possible, which opened the question of whether Cassell and Martin rigged the lotteries in their videos.

A class action lawsuit was filed July 7 by a woman on behalf of her minor son and anyone else affected, which names Martin, Cassell, CSGO Lotto, and Valve as defendants, and claims that "unlike traditional sports, the people betting on eSports are mostly teenagers." The suit also says Valve "has knowingly allowed an illegal online gambling market and has been complicit in creating, sustaining, and facilitating that market."

Ryan Morrison, an attorney who works on issues around video games, told PC Gamer it's possible that Cassell and Martin could face penalties or asset seizures if the Federal Trade Commission takes an interest in the case as well.

New York Attorney General Eric Schneiderman shut daily fantasy betting down in his state for some time, but is about to be thwarted by the state legislature passing a bill to legalize the sites. Other states have attempted or implemented their own measures to either regulate and legalize or stop the industry. A top priority of regulation has been restricting gambling to those over 18 years old.

Counter-Strike skin betting has so far been untouched and unmentioned by regulators and lawmakers, which makes sense considering the odd little corner of the internet where it resides. But as increasingly large sums of money change hands, as evidence of rampant corruption mounts, and as more young children take up gambling and their parents take action, it's going to be harder and harder to ignore.