Anatomy of An Iconic Image: How this photograph of a protester in Baton Rouge could come to symbolize a movement 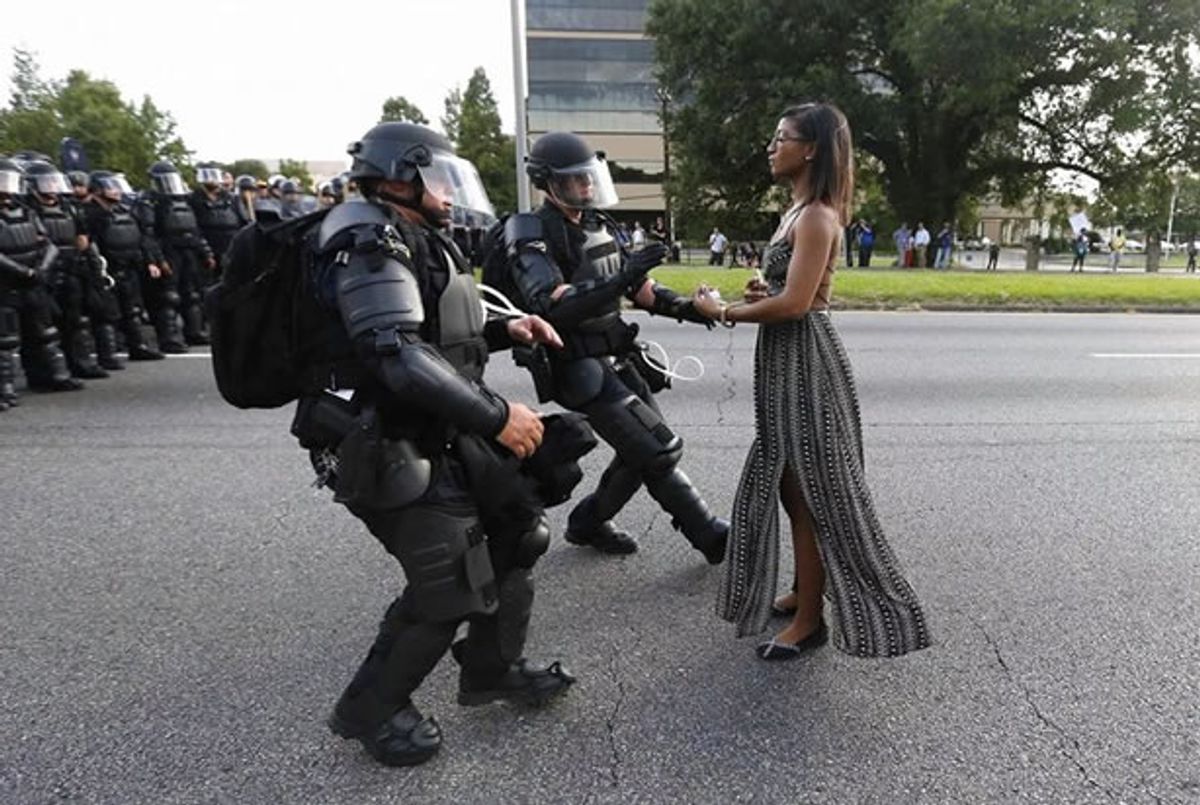 One-hundred and thirty-two protesters were arrested in Baton Rouge on Saturday and Sunday, but none quite so memorably as 28-year-old Ieshia Evans, thanks to a photograph by New Orleans-based photographer Jonathan Bachman.

That the photograph is powerful can be quantified — activist Shaun King's Facebook post of it alone was "liked" or "shared" over 55,000 times in a little under a day — but those numbers fail to provide of a sense of why this particular composition could be the one associated for decades to come with this summer of increasingly strained relations between the police and those they're charged to protect.

Like most memorable photos, Bachman's appears staged — and in a certain sense, it is. The point of a protest is, after all, to draw attention to an issue by creating a public spectacle, Moreover, Evans admitted to The Daily Mail that she deliberately stepped into the street after the police had told protesters that they would be arrested if they continued to obstruct traffic. So in those senses — the same that would be used to describe the photographs taken by Charles Moore in Birmingham in 1965 — Bachman's photo is staged.

But in another, more significant sense, it appears staged because of the manner in which it is being presented as a composition, a combination of capturing the perfect moment from the correct angle and cropping it to highlight its symmetry.

The two halves of the image are a study in contrast — on the left, the apparatus of the police state decked out in body armor that seems to extend infinitely in both directions; on the right, a single African-American woman who appears to be knocking two officers off-balance with the power of her gaze. Cover up Evans' half of the image and ask someone to imagine what those officers are confronting, and the answer would likely be a heavily-armed subject, not a single protester offering herself up for arrest.

The contrast between the left and right halves of the image is further heightened by the fact that they appear to exist in different universes — one in which an armed insurrection is being put down, and another -- highlighted by the green grass and old-growth behind her — in which picnic blankets could be.

Combine them, and the result is an almost literal rendering of the violence inherent in the system, and her equanimity in the face of it -- be it born of strength, resignation, or in all likelihood, both — is a powerful reminder of the dignity required to face that violence down.

Of course, that's not what's actually happening in the picture. In reality, those officers aren't being knocked on their heels by human dignity personified — they're stopping their body armored forward momentum in order to be able to place the plastic cuffs they're carrying on her hands and arrest her. But this discrepancy between the image and the world doesn't make Bachman's work any less powerful — if anything, it points to a tension that always exists in photography between the object represented and the representation of it, a tension that could broadly be described as "art."

Because that's what this composition is, in the end: a work of art likely to be remembered long after the name of the man whose death Evans was protesting — Alton Sterling — is forgotten. Few remember the name of the man shot dead in Ohio, or the woman kneeling over his body and keening, but John Paul Filo's photograph of the Kent State massacre is burned into all of our brains.