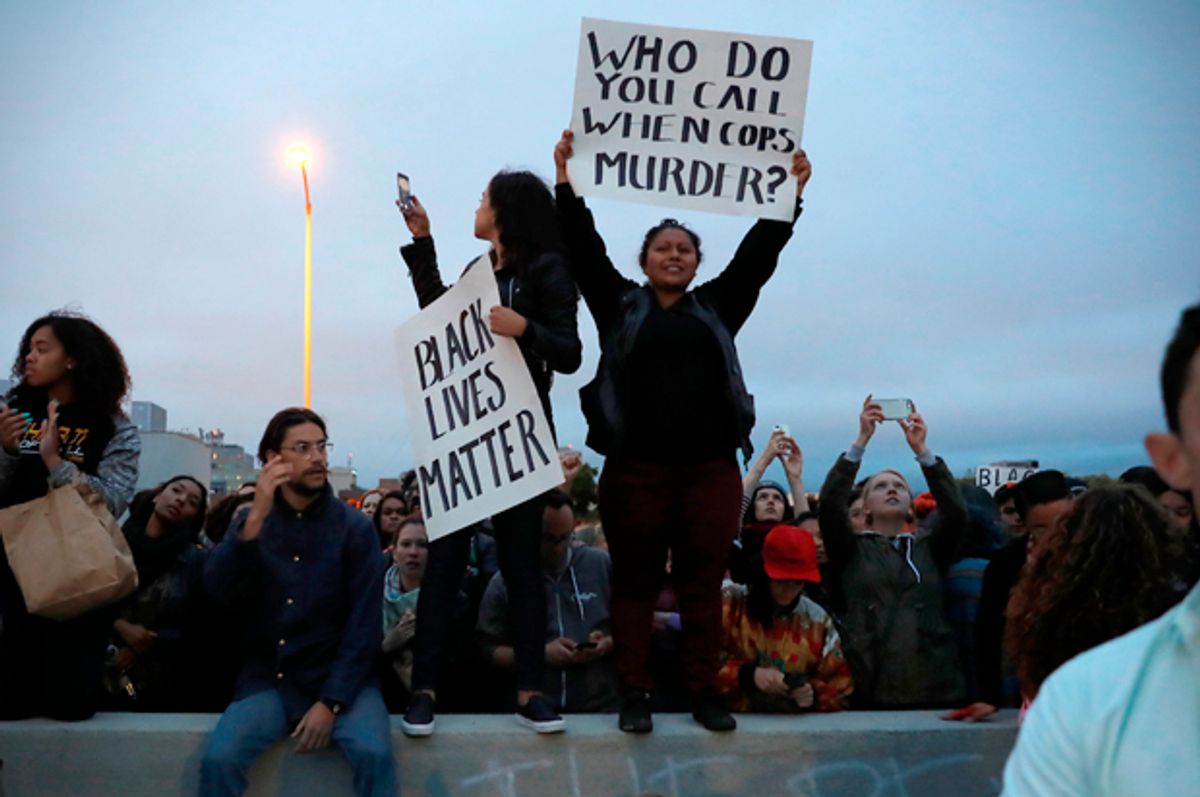 Last week, the news was dominated by the specter of racism and violence, after the well-publicized deaths of two black men at the hands of police followed by a horrific shooting of police officers providing security for a Black Lives Matter protest. Most of the discussion was centered around issues like how to reduce violence and build trust, what role racism plays in the violence, and how to balance human rights with the need for security.

But for one subset of conservatives, all that mattered less than their real concern: Women keep having sex without having babies. And so, furious that all this talk about race and violence and justice might distract from the supposed national tragedy of baby-free screwing, anti-choicers online redoubled efforts to hijack the Black Lives Matter conversation and turn it towards their obsession with abortion.

While liberal Twitter was busy talking about the deaths of Alton Sterling and Philando Castile, conservative Twitter was lighting up with increased activity on the hashtag #UnbornLivesMatter, a co-option of the phrase/movement name "Black Lives Matter." Many of the tweets focused on shaming liberals for believing there are more important things to worry about than women terminating unwanted pregnancies.

The SBA List, one of the country's most prominent anti-choice groups, promptly retweeted this nasty tweet that not only takes a swipe at Black Lives Matters but at victims of sexual abuse or bigotry who create "safe spaces" to talk about their experiences.

"The phrase 'unborn lives matter' has been around for a few years," Miranda Blue, a researcher for People for the American Way explained to me over email. "Since the beginning of the Black Lives Matter movement, parts of the anti-choice movement have attempted to coopt it to promote their own agenda, and they often do so in a way that is completely dismissive of BLM’s concerns."

Slogans like "unborn lives matter" serve a twofold purpose: Increase attention to the anti-choice cause while undermining the movement against police violence.

Equating the loss of actual people to gun violence with abortion serves to make mockery of the deaths of real people, as if they had no value greater than that of an embryo.

"Unborn lives matter", as a phrase, "echoes the implication in the phrase 'all lives matter' that the BLM movement’s concerns aren’t legitimate," Blue added.

“To appropriate the Black Lives Matter movement in the midst of the brutal tragedies too many in the black community face from state violence is repulsive," Alencia Johnson, the director of constituency communications for Planned Parenthood argued. "Attacks from anti-abortion extremists are now commonplace, but to co-opt a movement in this way shows the inhumanity of these groups."

This latest tweetstorm on the hashtag #UnbornLivesMatter is an excellent example of how this works. The hashtag has been around for awhile, but it surged last week, timed perfectly with the surge of interest in stories about police violence.

This chart, from the right-wing Patriot Journalist Network (PJNET) shows exactly how activity on this hashtag peaked. A lot of the surge is due to a coordinated effort by PJNET, a loose confederation of online conservative activists who do thinks like hold Twitter rallies, such as the Wednesday one for #UnbornLivesMatter. These coordinated actions are an effort both to get these hashtags trending and to inject right wing talking points into the social media conversation.

This effort was clearly about hijacking the #BlackLivesMatter discourse and directing it towards a topic they find much more compelling, which is shaming women for having abortions.

The top influencers on this hashtag, as identified by Hashtagify, have feeds that, when they aren't sending out guilt tripping tweets about abortion, are wallowing in racism and authoritarianism. Such as this woman who goes by the handle "sunbeltgirl": And who tweets about the supposed dangers of "sharia law" and "illegals." Another top 6 influencer in this hashtag goes by the name "ConservativeJewel" and is quite fond of overwrought racist hysteria:

But while the hashtag surge was organized by a bunch of right wing fringe sorts, the grim fact of the matter is that this undermining, race-baiting language has trickled up to the more mainstream anti-choice movement. For instance, the Radiance Foundation, which is a group supposedly focused on stopping abortion in the black community, left this charming tweet in the aftermath of Thursday's Dallas shooting:

Mainstream media and #BlackLivesMatter have fomented a war. Now they need to own the casualties. https://t.co/2dOnG1uEaI #Dallas #DisarmHate

And Students for Life was also eager to hijack the Dallas tragedy to imply a false equivalence between abortion and murder, while also using the "all lives matter" language that was created to undermine the specificity of Black Lives Matter:

Praying for #Dallas. So saddened by this violence. All lives matter and are precious.

And then again, with a tweet that suggests shooting someone dead is the same as getting an abortion:

The anti-choice movement has a long, ugly history of weaponizing abortion to minimize the problem of racism or even, in many cases, to perpetuate ugly racist stereotypes. Under the guise of "concern" that black "babies" are being aborted, anti-choicers have dumped a ton of propaganda painting black women as foolish and irresponsible, as women who are incapable of being loving, nurturing mothers.

"These are the same groups that want push harmful restrictions on abortion and policies that undermine preventative health care, which often disproportionately affect communities of color," Johnson argued.

And now the racism of the movement is exploding once again, as anti-choicers repeatedly argue that abortion is as bad or worse than killing actual black people.

Ryan Bomberger, writing for the anti-choice movement's biggest website Life News, published a piece Friday where he argued both that liberals are exaggerating the danger of police violence against black people and that abortion is the real evil, not police killings.

"Just to put things into perspective, Planned Parenthood kills more unarmed black lives in one day than police are accused of killing in one entire year," he writes, as if anyone who equates abortion with murder should ever be allowed to lecture anyone else about having perspective.

He then goes on to blame Black Lives Matters for the shooting in Dallas, even though the protest had been peaceful until the shooter unleashed on the crowd.

Many look to the anti-choice movement, with its rhetoric about religion and "life", as evidence that the conservative movement does have grounding in morality and isn't just about perpetuating economic injustice and race and gender hierarchies. It's common to hear liberals say that they may not agree with anti-choicers, but they believe they mean well.

But the eagerness of the anti-choice movement to hijack, undermine, or even demonize the Black Lives Matter movement exposes the "well-meaning people" belief as the myth it is. Anti-choice is about the same politics of resentment, bigotry, and cruelty as the rest of the conservative movement, and this behavior simply proves that fact once again.