Meet the new Newt, same as the old Newt: Don't be fooled by his comments about racism after the Dallas ambush 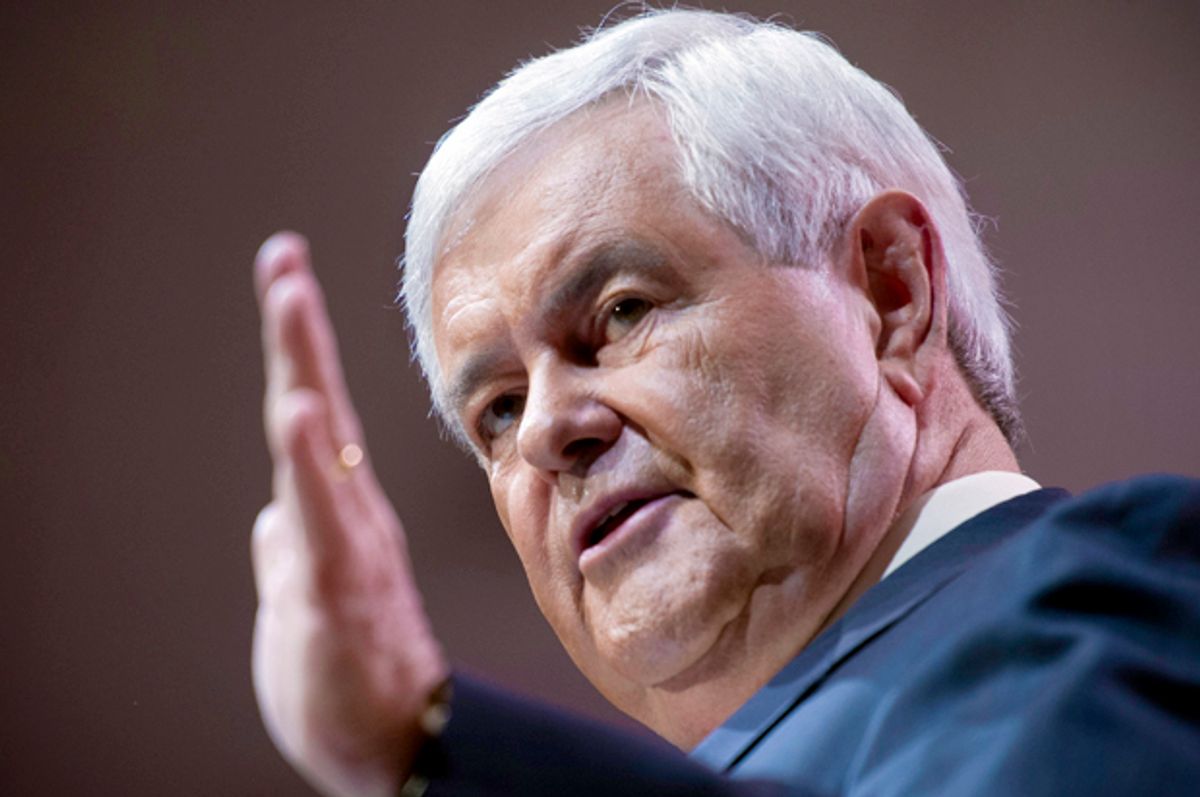 On Friday, with the nation still reeling from the videotaped murders of Alton Sterling and Philando Castile and the slaughter of five police officers in Dallas, Newt Gingrich and Van Jones sat down to try and Begin the Conversation about What We Must Do to fix the apparent crisis of relations between America’s police departments and African-American communities.

After the conversation, which was streamed on Facebook Live, Gingrich in particular received accolades – or at least some stunned golf claps – for readily acknowledging something he admitted people have been telling him for years: that “if you are a normal white American, the truth is you don’t understand being black in America and you instinctively under-estimate the level of discrimination and the level of additional risk.”

After discussing some of the progress the country has made since his childhood – African-Americans now heading police departments in major cities, John Lewis’s rise to a leadership position in the House of Representatives – Gingrich added,

But for some reason, we stalled out on the cultural, economic, practical progress we needed to parallel the fight over legality…What that creates is the kind of alienation where it begins to be legitimate to think about, whether it’s in songs or slogans or whatever, shooting policeman.

No one should be fooled by this sudden turn to wokeness by one of the Republican Party’s most significant figures of the last 25 years. He has been known to send different signals before. As Steve Kornacki pointed out, Friday was not the first time Gingrich has spoken about racism as if he was actually aware that it is a real thing in society, and that the GOP has been unwilling to admit it.

But then one can also ask where was the Gingrich of Friday’s Facebook Live conversation during Bill Clinton’s presidency, when as Republican minority leader and then speaker of the house after the ’94 elections, he pushed for major welfare reform and crime bills to be even more punitive towards low-income and disproportionately minority populations than they might have been with a slightly less conservative leader of the GOP caucus.

That Gingrich also still appears to be with us. The New Republic flagged Gingrich saying on Fox News on Friday, just hours before his sit-down with Van Jones,

Gingrich has spent much of Obama’s presidency, especially during his own 2012 campaign for the Republican presidential nomination, tossing aside the racial dog whistle in favor of a foghorn. This is the same Gingrich who once told New Hampshire’s lily-white electorate that he would demand black people “stop accepting food stamps and start accepting paychecks,” who called Obama “the food stamp president” and once suggested Obama was pushing Marxist “Kenyan anti-colonialism” in the course of praising one of Dinesh D’Souza’s intellectually bankrupt attacks on the president.

Gingrich has also become a close adviser and possibly the leading vice presidential candidate to the carroty-colored Donald Trump, whose run has been the most obvious and egregious pitch to white supremacists of any presidential campaign at least since Barry Goldwater in 1964. Over the weekend news stories appeared reiterating that Gingrich has been pushing hard for the No. 2 slot on a ticket led by a man who just four years ago was calling for an investigation of the “real” provenance of President Obama’s birth.

Gingrich is running to help lead a Republican Party that has spent the last eight years trying to delegitimize the nation’s first African-American president at every turn. A Republican Party that has spent 40 years seeding the judiciary with right-wing judges to overturn the gains African-Americans made in the civil-rights era, culminating in John Roberts writing the majority Supreme Court opinion that gutted the 1965 Voting Rights Act. (Roberts began his career in the Reagan Justice Department in the early 80s, where he advocated for rolling back civil-rights protections.)

But we’re all supposed to believe that the Newt Gingrich who is running to help lead this party, who has not denounced the endorsements the Trump campaign has earned from the nation’s most prominent racists like David Duke, has had some sort of stunning change in outlook because he preached one lukewarm message of racial justice to Van Jones on the very same day he was winking at a Fox News audience that the current problems are the fault of an African-American president who has “failed” to overturn 50 years of liberal policies and replace them with self-esteem seminars?

There are some conservatives who, since the events of last week, have published thoughtful ruminations on race relations in places where you would not expect to see such writing published. So while I am skeptical that any kind of a sea change in this country is imminent, perhaps I’ll be proven wrong. Green shoots and all that.

But Newt Gingrich is still the same power-hungry ladder-climber he has been throughout his entire career, talking out of both sides of his mouth and tailoring his message to audiences even when that message completely contradicts something he said literally a couple of hours earlier. Don’t let his natural talent for bloviating obscure that fact.